Ryan Garcia greeted the news with gladness of Gervonta ‘Tank’ Davis’s contract soon expiring with Mayweather Promotions after his May 28th fight against Rolando ‘Rolly” Romero.

The unbeaten lightweight contender Ryan (21-0, 18 KOs) says a fight between him and the superstar Tank Davis (26-0, 24 KOs) will be a heck of a lot “easier” to make now that he’ll be free and clear of Mayweather Promotions because they would have him fighting in-house competition.

Whether Ryan can get a fight against WBA ‘regular’ 135-lb champion Tank will depend on how he does in his contest next month on April 9th against Emmanuel Tagoe (32-1, 15 KOs) at the Alamodome in San Antonio, Texas. The fight will be shown on DAZN.

Ryan must beat the 33-year-old fringe contender Tagoe and look good in doing so if he wants to be a viable option to challenge for a world title against WBA secondary lightweight champion Tank Davis in 2022.

“I think so because Mayweather would always say that he’s only fighting in-house and that they’re only going to keep it within themselves, so this does open up doors for us to get that on,” said Ryan Garcia to Fighthype when asked if the chance of him fighting Tank Davis will be increased now that his contract with Mayweather Promotion is expiring after his May 28th fight.

“I think now there’s a real strong possibility we can make it work,” Ryan Garcia continued about the chance of him getting a fight made with Gervonta. “Yeah, as a free agent, you’re able to work with anybody, and that makes it way easier.

“I think,” said Ryan when asked if Gervonta will be open to working with everybody once he becomes a promotional & network free agent. “I don’t think he’s weird like that. Do you know what I mean? I think he’ll fight anywhere.

“Yeah, I wouldn’t think that he’s scared,” Ryan said when asked if Gervonta would be willing to take the toughest challenges as a free agent.

“He has to tell me to stop. ‘Man, you need to chill out,’ because he’s like, ‘You’re a manic,'” said Ryan on working with no coach Joe Goosen. “It’s really like we have such a good connection that if he has to tell me to pick it up, let’s say I’m hitting the bag.

“I start talking, he says ‘get back to the bag, you’re working.’ So maybe little things like that, but really, we’re training hard.

“Say I’m training and I feel like I’m not giving 100%, I say, ‘What am I doing? Snap out of it. Work, work work.’ I try to pay attention to my body and how it’s reacting or if I lose focus, I get right back into focus.

“I’m just blessed and grateful. I take what I take and thank you, God,’ and I keep moving forward. One thing that I learned during this time is don’t complain about nothing. It’s raining, don’t complain. Work.

“Your hurt a little bit. Don’t complain, work. No complaining. God doesn’t like complaining, so you just go to work,” said Ryan. 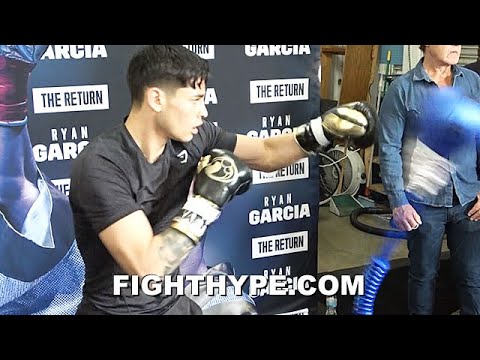