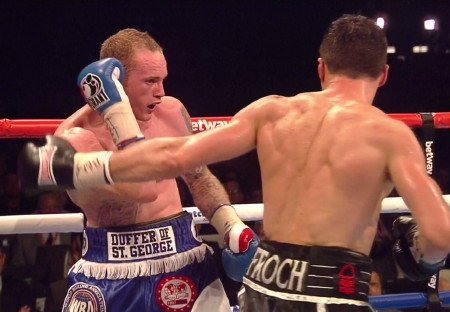 HBO commentator Roy Jones Jr. says that he recommends that IBF/WBA super middleweight champion Carl Froch (33-2, 24 KO’s) go in the direction of former WBC middleweight champion Julio Cesar Chavez Jr. for his next fight rather than Gennady Golovkin, as Jones Jr. feels that with the mistakes that he saw in Froch’s game last night in his win over George Groves (19-2, 15 KO’s), that he would be taken advantage of by Golovkin if he were to fight him next.

Froch has an optional title defense available for his next fight, and his promoter Eddie Hearn reportedly has been in talks with Top Rank for a fight between Froch and Chavez Jr. for the fall. It would seem that Hearn likes the idea of Froch fighting someone as popular as Chavez Jr. There’s been no talk of Hearn reaching out to K2 Promotions for a fight against Golovkin though.

“Chavez Jr. is the best match-up for Froch,” Jones Jr. said last night. “The reason being because of his amateur background isn’t as deep as Gennady Golovkin’s or Andre Ward. He [Froch] could catch Chavez Jr. just like Chavez Jr. could catch him. It could be a fight of who catches who first; whereas with triple G [Golovkin], those mistakes that he [Froch] would be brought out pretty quick and you would see a whole different level of playing field between the two contestants.”

Jones Jr. is right. Golovkin would take advantage of every mistake that Froch made and would make him pay for it. Froch seemed bothered by the few power shots that Groves landed last night in their fight at Wembley Stadium. But with Golovkin, he wouldn’t fight as timidly as Groves did, because he would be hitting Froch major shots in every round of the fight.

Froch would literally take a beating, and he very likely wouldn’t be able to count on Golovkin making a rookie mistake like Groves did by willingly backing himself up to the ropes and trying to fight Froch from that position. That was a stupid move on Groves’ part in doing that. Golovkin would never make an amateur mistake like that against Froch or anyone, because he’s too smart and cagey to give his opponent an advantage the way that Groves did. Groves deserved to lose for being so careless. Golovkin would never think to make the same mistakes that Groves did against Froch.