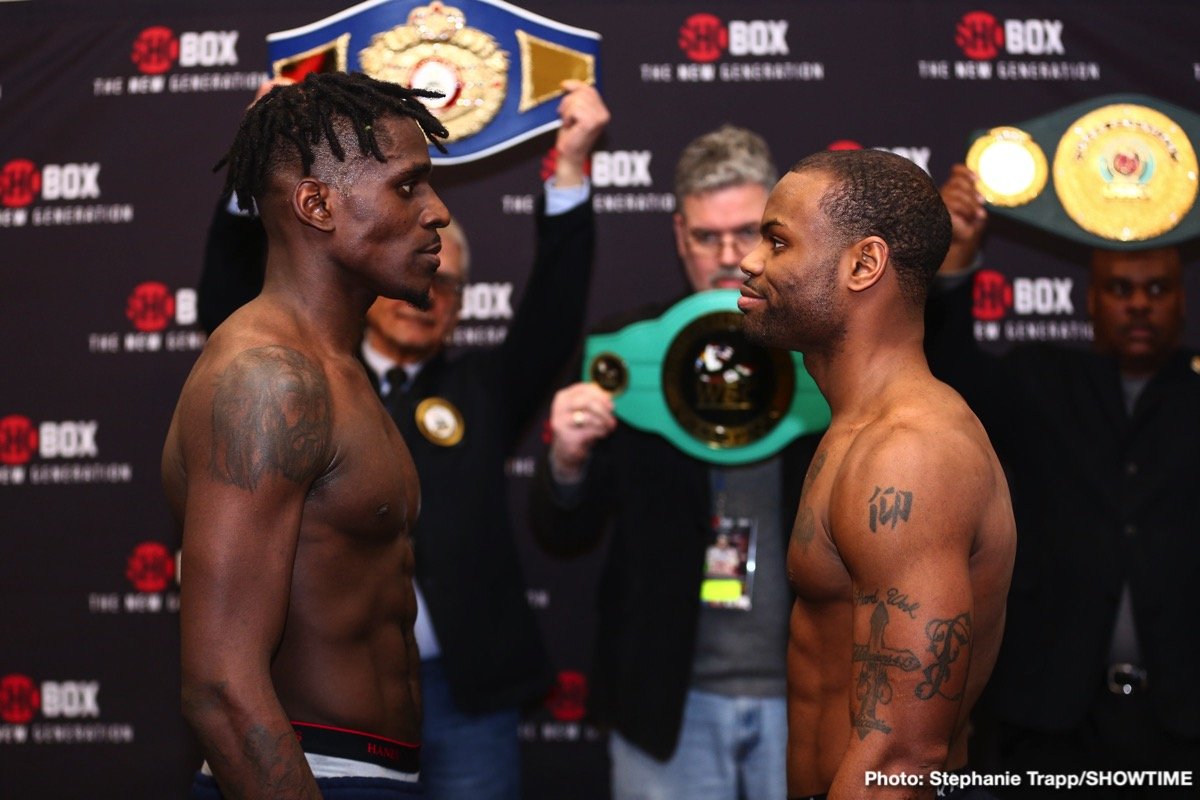 Undefeated super middleweight prospect Ronald Ellis and once-beaten DeAndre Ware both made weight on Thursday for their 10-round super middleweight clash in the main event of a ShoBox: The New Generation doubleheader tomorrow/Friday live on SHOWTIME (10 p.m. ET/PT) from Main Street Armory in Rochester.

Ellis (15-0-2, 10 KOs), who recently sparred with Canelo Alvarez and Sergey Kovalev, returns toShoBox for the fourth time seeking a statement win. The Lynn, Mass., native faces Ware (12-1-2, 8 KOs), a come-forward fighter out of Toledo, Ohio who trained with Tony Harrison in preparation for his upset win over Jermell Charlo.

The event is promoted by GH3 Promotions in association with Greg Cohen Promotions. Tickets can be purchased by calling 585-232-3221.

In the opening bout of the telecast, undefeated lightweights Thomas Mattice and Will Madera will face off in an eight-round 135-pound matchup. Like Ellis, Mattice (13-0-1, 10 KOs), of Cleveland, returns for his fourth bout on the prospect developmental series. Madera (12-0-2, 6 KOs), a three-time New York Golden Gloves Champion out of Albany, N.Y., will make his television debut.

The scheduled televised opener between Abraham Nova and Oluwaseun Joshua Wahab was cancelled after Wahab was forced to withdraw from the bout due to immigration issues entering the U.S. from Ghana.

“I trained at Buddy McGirt’s new boxing gym in Northridge, Calif. I sparred Canelo Alvarez for his last fight and was in camp with Sergey Kovalev for his fight this weekend.

“I learned a lot from Canelo and Kovalev. I feel like sparring with them gave me an edge, so I’m going to look like a whole different fighter in there. Canelo is more compact and he comes a little bit faster. Kovalev, he’s big and he’s a banger.

“I think it’s a perfect fight for SHOWTIME. This one is going to be entertaining.”

“I’m feeling great, feeling strong. We had a full camp this time around so I’m looking for good things. My training camp was about six to eight weeks at the Glass City Gym in Toledo. Prior to that, I was in Tony Harrison’s camp helping him to get ready to fight (Jermell) Charlo.

“Sparring was great, it was probably the best sparring and best camp I’ve had so far. I only had about 12 days to prepare for my last fight and I’m in much better shape this time. I think that’s going to play a big difference in this fight tomorrow night.

“Ronald Ellis is just another guy in my way. I think Ellis is a tough fighter. From what I’ve seen, he’s a come-forward guy. He tries to box a little bit – there’s skill. I respect anybody that gets in that ring, but come fight time, all that stuff goes out the door. I’m coming to win.”

“It’s a great feeling to come back to ShoBox for the fourth time. My last fight [a draw against Hamazaryan] was a great fight, a very exciting fight, but I thought I edged it five rounds to three. We’re going to do what we have to do to make sure this fight doesn’t turn out like that.”

“If I use my skills and my ability to use the ring it should help me tomorrow night. I don’t really know much about my opponent, I haven’t watched him since he was a last-second opponent and I got him like two weeks ago.

“Training camp was great. We were training for a southpaw and then they switched it when my opponent switched but I’m confident and I feel ready.

“I’m better than what I’ve shown in the past. My plan is to show that tomorrow night.”

“I feel great, I’m confident and I’m looking to put on a show. I had a great camp, I trained hard and I have no worries.

“For tomorrow, the key is pressure, intelligent pressure. I don’t want to come in overwhelming myself but still keep the pressure on him.

“Our styles should make for an exciting fight. If I bring the pressure it’s going to be a fun fight

[The Hamazaryan fight] was controversial. The first fight was a really close fight and I think if I apply the same pressure and fight smarter, I’ll get the victory.

“I’ve been waiting for an opportunity like this. Now I just need to finish the job.”