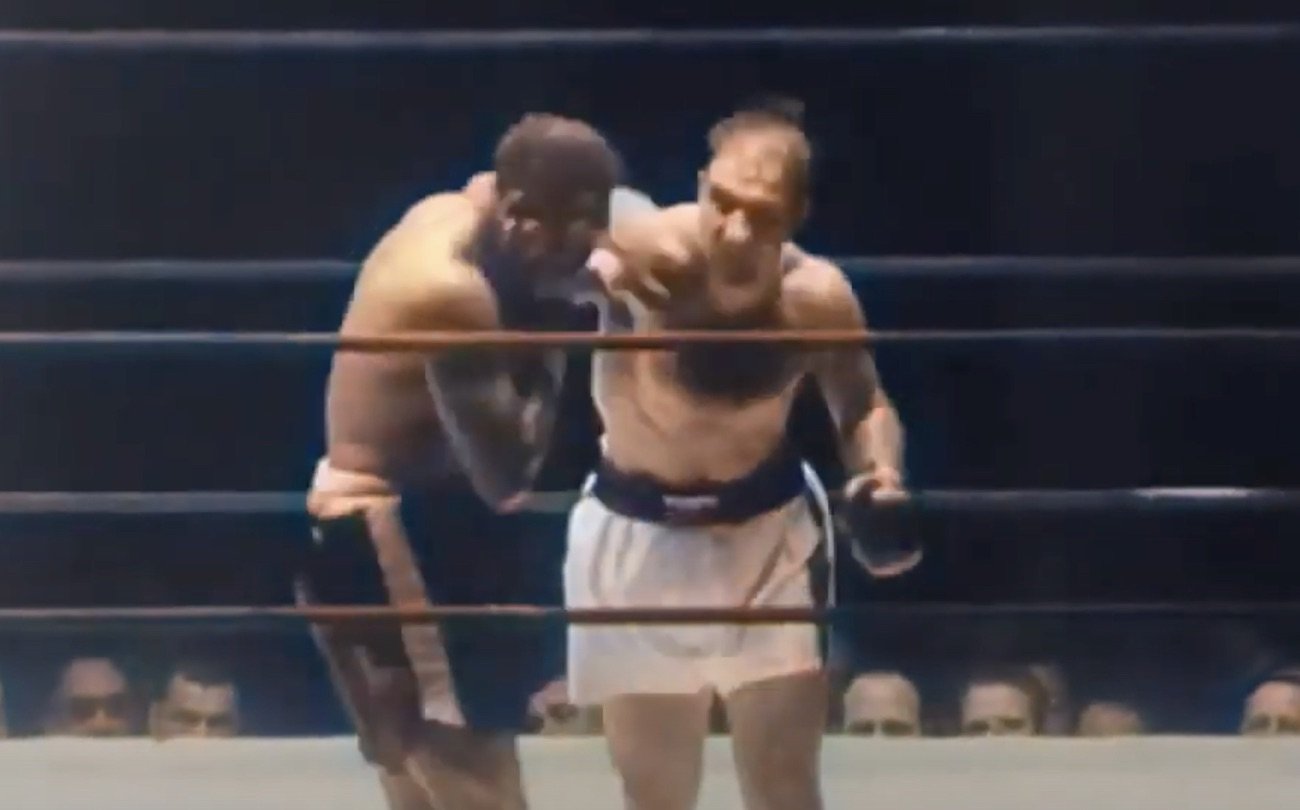 Let’s examine Rocky Marciano’s five heavyweight title defences in wake of his one round demolition of 39-year old Jersey Joe Walcott on May 15, 1953: the rematch to their ultra-dramatic scrap on March 3, 1953 when the “behind-on-the-scorecards” Brockton Blockbuster pulled victory from the jaws of defeat in round thirteen with a perfectly-timed right uppercut near the ropes that landed flush on Walcott’s jaw, leaving the champ a helpless heap whose pummeled body collapsed to the ring apron with a sickening thud.

After the Walcott beatdown, Marciano was matched with Roland LaStarza at NY’s Polo Grounds on Nov 9, 1953. Rocky had a score to settle. Back in March 1950 Roland – undefeated at the time (25-0-0) – lost a highly-disputed split decision to Marciano.

The official scorecards had it a draw; but under New York’s supplemental scoring system referee Jack Watson had Marciano ahead 9-6 over the 10-round contest. Rocky earned a super-tight split decision. Roland proceeded to win sixteen of his next eighteen bouts, and was given a fair chance to pull off an upset – especially since he had never been knocked out before.

Each warrior weighed 185 pounds, although the 6 feet LaStarza had a two-inch height advantage. The bout attracted 45,000 attendees and lived up to its hype. It was voted Fight of the Year by Ring Magazine.

By the seventh round, the Brockton Bomber was brushing off the rust from nearly a year of inactivity. His inside ripping power began driving Roland into the ropes where Rocky would always would dominate. Roland started showing definite signs of wilting under the relentless pressure. Some scorecards had the fight a virtual draw (Rocky had a point deducted from a low blow) going into the eleventh round when LaStarza got knocked right through the ropes to the ring apron and was given an eight-count. When Roland once again lay helpless against the ropes, referee Ruby Goldstein put a merciful halt to the brutal pounding.

Marciano didn’t defend his title until nine months later at Yankee Stadium. The opponent was crafty veteran and former heavyweight titlist Ezzard Charles who came off a third round KO of the hard-hitting Bob Satterfield.

The first four rounds belonged to Charles. Marciano, bleeding profusely from a wide, inch-and-a-quarter gash over his left eye, began to assert himself in round five and would dominate the middle and later rounds. He won a unanimous 15-round decision, although Judge Harold Barnes scored it “close to the bone” at 8-6-1. The AP had Rocky far in front at 10-4-1.

After the bout, Rocky admitted: “He gave me a helluva fight. He deserves a return fight if he wants it.” The game, battered but unfazed 32-year old Cincinnati Cobra snarled back: “I want him again, I thought I won.”

The rematch three months later at Yankee Stadium had Marciano as the 9-2 favorite. After losing the first round, Marciano took over completely. Charles got chopped down in the second round, and then seemed to run out of steam. It was as if he knew his quest to regain the title was a forlorn hope. The ending came in the eighth. A left hook and a right cross to the jaw put Charles down for the full count. A long right to the head had floored him for a four count earlier in the round. It was a lop-sided affair, yet still managed to garner Fight of the Year honors from Ring Magazine

The Brockton Massachusetts-born Rocco Francis Marchegiano was 31-years old, but only fought two more times before hanging up the gloves, exactly one year later.

The first match with Don Cockell was semi-controversial. In hindsight Nino Valdez might’ve posed a greater challenge, since the Cuban-born 30-year old was on an 11-fight winning streak including a decision victory over Ezzard Charles, plus quick knockout wins against top-ranked Tommy Jackson and European champ Heinz Neuhaus.

Cockell was a Brit who’d turned pro in 1946 at age 17. He maintained a hectic schedule exclusively within the UK; and by 1949 had matured into a light heavyweight. After losing badly via 11th round TKO in Sept 1952 to Randy Turpin (one-time conqueror of Sugar Ray Robinson) for the vacant British Commonwealth LH crown, Cockell decided a knife and fork could be his lunch ticket to a big-time payday. Over the next the years, he decisioned Roland LaStarza, vanquished Harry “Kid” Waters on three different occasions, and also won the British Empire Heavyweight title against Johnny Williams.

The fight was set for May 16, 1955 at San Francisco’s Kezar Stadium. Cockell weighed 210 pounds while Marciano tipped the scales at 189.

Here’s how Bob Myers of the AP described the action: “It took a lot of chopping down to cut down Don Cockell, the sturdy oak of England but whack him down he did, and today Rocky Marciano remains the boss of the world’s heavyweight fighters. Fifty-four seconds after the ninth round began, the power-punching Marciano disposed of the gallant but battered and beaten challenger…the end drew nearer when the game Britisher went through the ropes head first at the bell ending the eighth. The climax came when Cockell was smacked twice to the canvas almost as soon as the ninth round began.”

Cockell raised himself at the count of eight and went down again for a count of five, whereupon the ref decided there was no point in prolonging the agony of the bloodied challenger. In his dressing room, Marciano gave Cockell a lot of credit: ”He’s got a lot of guts. He took everything I had and kept standing up. He’s an underrated fighter.”

His final tiff involving LH champ Archie Moore (149-19-8) would become one of Rocky’s hardest matches. The Old Mongoose was a crafty veteran. After his 1935 pro debut, he had fought opponents of every imaginable style. His dazzling record included 107 KO’s, so his punching power was devastating.

Moore kept getting better with age. In the 47 fights preceding his September 24, 1955 showdown with Marciano, Moore won 45 of them. A decision loss to Harold Johnson was later avenged with fourteenth round knockout. The other blemish was a controversial DQ loss back in 1949 to Clarence Bacon; offset via a 4th round TKO in their rematch

Most of Archie’s matches were against heavyweights. He would only sweat down to 175 pounds when defending his LH title. Here’s a list of some top heavies that Moore bested: Bob Baker, Bert Whitehurst, Bob Satterfield, Clarence Henry, and Nino Valdez on two different occasions (the second for the Nevada state version of the heavyweight title).

A crowd of 61,574 at Yankee Stadium witnessed a display of pure savagery.

Here’s how the Gettysburg Times described the action: “Rocky won it in typical fashion with a relentless bulldozing attack that smashed Archie’s crumbling defences, ending the bout with a vicious left hook to the jaw at 1:19 of the ninth round. Rocky came off the floor in the second round like he did in his memorable first fight with Walcott.”

Before the final 10-count from the endless assault, the challenger also hit the canvas three times: once in the sixth and twice in the eighth round.

It was Rocky’s sixth and last title defence.

Had the 32-year old undefeated champ with the granite chin and incredible stamina not retired, his next test probably would’ve been against one of the following four fighters: Nino Valdez, Tommy “Hurricane” Jackson, Floyd Patterson or Bob Baker.

Rocky Marciano’s spotless record of 49-0-0 with 43 wins by the knockout route is further embellished by his status as the most exciting heavyweight champion in boxing history.