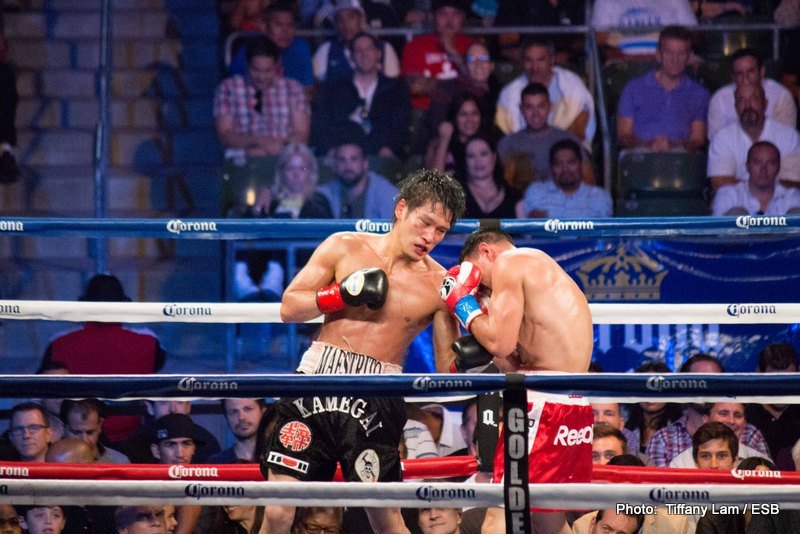 Robert “The Ghost” Guerrero was understandably happy after his victory over Yoshihiro Kamegai at the StubHub Center in Carson. CA, but it was a tough fight. He took a lot of unnecessary punishment, and might need another year off to recuperate!

In Robert’s pre-fight hype, he explained the need for the lengthy time off to take care of things and heal his body. He gushed over his new training program that included lifting weights. He said it was helping him to hit harder, and to be quicker.

So what did he do against Yoshihiro Kamegai? He stood in front of him and trades power shots? What ever happened to “The Ghost”? Where is the guy who boxed Michael Katsidis’ socks off in Apr. of 2011? Robert also did a pretty good job with Selcuk Aydin. when he moved up to welterweight.

However, starting with Andre Berto, he seemed determined to prove he could slug with the bigger guys. That meant he had to take a lot of unnecessary punishment. The pattern continued with Floyd “Money” Mayweather, Jr., and of course Saturday night.

Losing fighters always say they’re “…going to go back to the drawing board”. That cliche is supposed to mean the person will learn from his mistakes. Winners also do it. Sometimes, after viewing film or video, a fighter realizes he might see a correctable flaw. For example, he might see how he was looping his shots. He the can work on straightening them out. A lot of times, a fighter will understand. by reviewing fight films, that he had several opportunities to land counter punches if only he would have let his hands go. There are lots of other things a fighter might benefit from if he is willing to learn.

However, all too often a fighter’s spoken desire is nothing more than hollow words. They go unfulfilled. Maybe the honest intent is not there. Anyone who wants to improve has to be honest with himself. Hall of Famer Roy Jones, Jr. explains it like this. A fighter should do this or that because that or that is the gift or talent God gave him. If the fighter ignores what has been given to him, and elects to go another way, he is making a big mistake.

What does that mean? Well, the obvious point would be that if a fighter was gifted with quickness and superior reflexes, then it would be foolish for that individual to let his desire to be a tough guy turn him into a slugger. An important ingredient in the make-up of all individuals, as mentioned earlier, is the need to be honest with ourselves. Honesty allows us to function at our best in social and business settings. But, honesty is also needed in sports, especially boxing.

Why? Because boxers all too often get caught up in a desire to be viewed as a tough guy, a so called fan favorite. They kid themselves into thinking in order to be successful, they have to be willing to take shots, to trade with their opponents, even if their abilities mean they could avoid it. The truth is what fans appreciate most is talent. Of course fighting spirit is also appreciated. Fans do appreciate an overachiever, someone who is less talented, but who wants it more.

But, Guerrero didn’t get his nickname “The Ghost” because he’d been haunting houses. He got the nickname because he knows how to box, how to apply science to his efforts and be elusive. In the Katsidis fight, “The Ghost” demonstrated the ability to slip and slide, bob and weave, give angles and counter appropriately. That’s the way it should be done. That’s the objective…..hit and not be hit! When done properly, it’s beautiful, and fans love it. Just ask Floyd, the highest paid athlete in the world.

Consequently, even though “The Ghost” came away with a win, he still should go back to the drawing board. He needs to go way back to 2011 (and before), and view video that will remind him of his true capabilities. He needs to rekindle those overlooked talents he let slip away over the past few years. It (macho stuff) seems to have taken a deeper root since he moved up to the heavier weight class. It seems that it (macho crap) has become his new ambition. He’s not alone. Too often that misplaced attitude will lead a fighter to a black hole, where there is no escape. Hopefully, Robert has not reached that point of no return. Let’s not give up The Ghost!