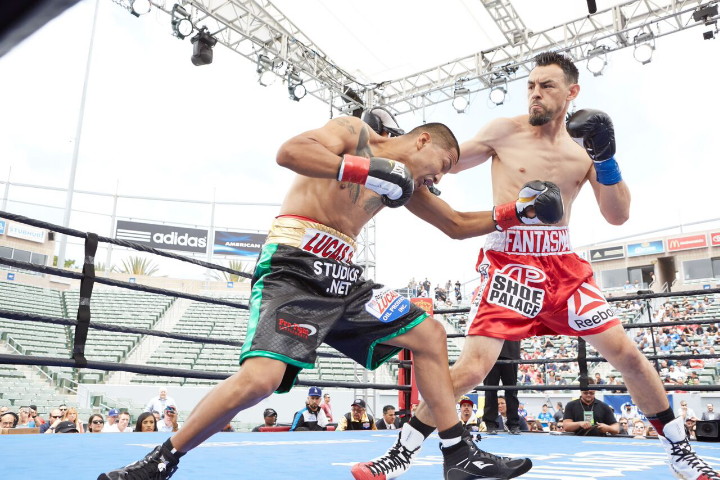 (Photo Credit: Suzanne Teresa/Premier Boxing Champions) Carson, Calif. (June 6) – Southern California boxing fans were treated to an afternoon of hard punches and quick action as Premier Boxing Champions (PBC) on NBC took to the ring at StubHub Center in Carson, Calif. The Saturday afternoon fight card, part of a jam-packed day of sports action on NBC, showcased a heavyweight brawl between Dominic Breazeale and Yasmany Consuegra and a fast and furious welterweight bout between Robert Guerrero and Aron Martinez.

In the PBC on NBC main event, Guerrero and Martinez let their fists fly from the opening bell to the closing bell in a showdown that saw over 1,000 punches thrown between the two welterweights over 10 rounds. It was clear from the beginning of the fight that Martinez was not intimidated by Guerrero’s skills or resume as he dominated the first several rounds, even dropping Guerrero in the fourth. But Guerrero was able to turn the table in his favor as the fight progressed and dominate the second half of the 10 round brawl. The judges scored the bout 97-95 and 95-94 for Guerrero and 95-94 for Martinez in a split decision victory that brought the crowd to its feet.

Breazeale, a 2012 U.S. Olympian and Southern California-native, needed less than three rounds to defeat previously unbeaten heavyweight Conguegra. The referee called off the fight at 1:49 of the third round after Consuegra hit the canvas three times as Breazeale extended his professional record to 15-0 with 14 KOs.

The featured fight on NBC SportsNet saw a featherweight battle between the once-beaten Argentinean Jesus Cuellar and former world champion Vic Darchinyan that came to a half when Cuellar knocked out Darchinyan at 1:04 of the seventh round.

NBCSN also featured the return of Alfredo Angulo, who scored a fifth-round knockout victory over Delray Raines in a middleweight contest that saw “El Perro” raise his hand in victory for the first time since 2012.

Here is what the fighters had to say about Saturday afternoon’s fights:

“Aron Martinez came to fight and the fans got to see two warriors go at it.

“I can’t explain why I go to war so much. I just love to get in there and mix it up.

“When I got up off the canvas, I told myself…get up and win this fight.

“Once I started boxing I felt I started dominating the fight.

“We got the victory and now it’s time to move on to some big fights and give the fans the warrior type fights they deserve. I’m an action fighter and I’ll continue to be so.

“There is something about this arena that makes you want to stand there and trade.

“I just suffered the loss of my cousin. She passed away last week and this fight was for her.”

“I’m very happy with my performance. I thought I won the fight.

“I thought the third scorecard was way out of line.

“It was a great experience fighting on NBC. I wanted to put on a great fight for the fans and me and Robert did that.

“I look forward to being more active and fighting again as soon as possible.”

“Its always a little different to fight in the afternoon. The fans came out to support me. I put on a big show and got the win.

“He was putting his hand on his right side and I was hitting him with the upper cut.

“I couldn’t ask for anything better.

“I’d love to be back in the ring as soon as possible. Everybody did a great job putting this together. This was only three rounds right here and lets do it again in a couple months.”

“I wasn’t hurt. It was more of a slip. Darchinyan is a very tough warrior and I’m glad I came out on top.

“This is my first fight coming back to my old trainer [Clemente Medina] and it was great.

“A lot of people say ‘the dog is dead,’ but if you ask the people that saw my performance, they will all tell you the dog is alive and well.”