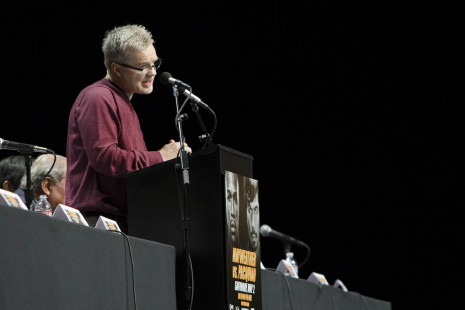 (Photo credit: Esther Lin/Showtime) If Floyd Mayweather Jr. has a place to call home in addition his actual house, it is the MGM Grand in Las Vegas, Nevada. This is the place where he knows everyone, and everybody knows him. Fighting at home it is believed, skews the benefit of the doubt in the hometown fighter’s direction. Whether it is the judges or the referee, it seems as though there is a popular belief in the concept of an unbalanced evenhandedness present.

“I know all the referees, I know all the good ones, I know the great ones. I think they all respect me and Manny enough to give us a fair fight. That’s all I’m asking for”, said Roach in an interview with ABS CBN Sports.

Already team Pacquiao is analyzing things that can potentially go wrong and are ultimately out of their hands. After the Joe Cortez snafu at the Mayweather Jr. vs. Ortiz bout in 2011, the belief of possible unfairness instantly skyrocketed, with those boxing fans not fond of Mayweather Jr. criticizing the judges and the decision to let the outcome stand.

“Whoever refs this fight, all I’m asking is please, give us a fair fight, and let the best man win, and I think they’ll do that. My biggest concern is the referee right now,” pleaded Roach.

I think that its fair game to worry about every detail in a fight of such colossal significance. With Mayweather Jr. being the Las Vegas household name, it is smart to start voicing whatever concerns team Pacquiao might have in order to get the media involved, just in case something does happen, and that occurrence forces a protest later on.