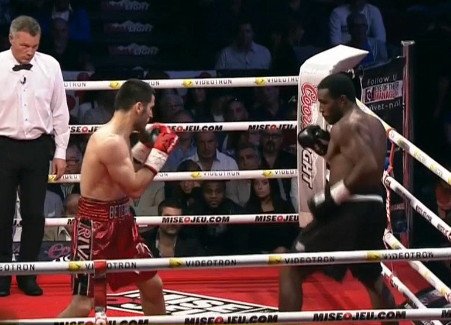 Beterbiev is scheduled to fight Campillo at the Pepsi Coliseum, Quebec, Canada on the undercard of Adonis Stevenson vs Sakio Bika. Gabriel Campillo is a seasoned campaigner managed by ex-champ Sergio Martinez and he brings a certain type of pro experience and routine. He may not be a high-risk opponent as he has been stopped more than once – by Sergey Kovalev in Sergey’s 20th pro bout, by Andjei Fonfara in Andjei’s 25th outing and by Uzelkov. Beterbiev has fought 7 times and has boxed a total of 15 rounds while Campillo has amassed 211 paid rounds.

This fight could actually be a step down for the Russian who fought Tavoris Cloud and won surprisingly easy via KO in round 2. After that he fought Jeff Page Jr. who was 15-0 and a former Golden Gloves champion. Beterbiev won that fight in the same fashion but he was knocked down by Page in the first. It was a legitimate KD although the punch hardly landed and it is more revealing of Beterbiev’s style than his fluent KO streak. Beterbiev rushed against Page from the bell and his implacable, if not reckless onward march was interrupted in the end of the round when he misjudged his feet position. He used too much physical strength even when he was not punching and underestimated the strength of the opponent or the inevitable opposite reaction. He was going for the KO from the first second and in the end of the round he threw a right hook while he was moving laterally trying to intercept his opponent’s movement. Artur missed with his feet square under him. Page pushed Beterbiev’s neck with the back of his lead glove sending him further off balance and followed up with a power head shot that missed. The glove and forearm landed on the Russian’s shoulder and the momentum caused Beterbiev, already off balance and with an awkward feet position, to fall backwards and to skid on the mat. He got up right away and appeared embarrassed and upset but not hurt. The KD appeared legitimate as Beterbiev went down as a result of the two punch combo even if it did not land cleanly. The combo would not have scored at all otherwise.

The mistake Beterbiev made was not due to lack of experience, he is 30 years old and his learning stage is behind him. He is in an adjustment stage now and should be fine-tuned to the priorities and banalities of a long pro bout. He will eventually meet opponents he will not be able to run over in a couple of rounds. Patience and discipline would be the key for a strongman like him whose game is built around punch power. He needs to get a little frightened of the opponent’s ability to punish his occasional unprepared bombs.

A knockdown is not a major issue in a fight you win. One Blake Caparello was credited with a 1st round knockdown against Sergey Kovalev. Caparello even landed flush on the chin but he had stepped firmly on Kovalev’s toes, Kovalev’s foot was caught when he was hit and he tripped down. It should have been ruled a slip/trip. Adonis Stevenson was knocked down quite earnestly by Andjei Fonfara. A knockdown should be treated as a learning experience, a wake up call and not a chink in the armor.

Gabriel Campillo has fought Kovalev, Fonfara, Cloud, Shumenov and could be used as an indirect basis of comparison. Beterbiev should step up in class permanently after this fight and at some point he might even end up against his former Russian national team mate Sergey Kovalev. This fight isn’t very likely form current financial standpoint and Artur Beterbiev will probably meet Jean Pascal or Adonis Stevenson among others before that. They have every reason to avoid him and his team should waste no time in guiding to a mandatory title fight position. Boxing is a managerial mess right now, making a fight has become a complex transaction and few light heavyweights would risk a fight against Artur Beterbiev. Proper coaching and training conditions provided, he is quite capable of doing his part and winning his bouts.