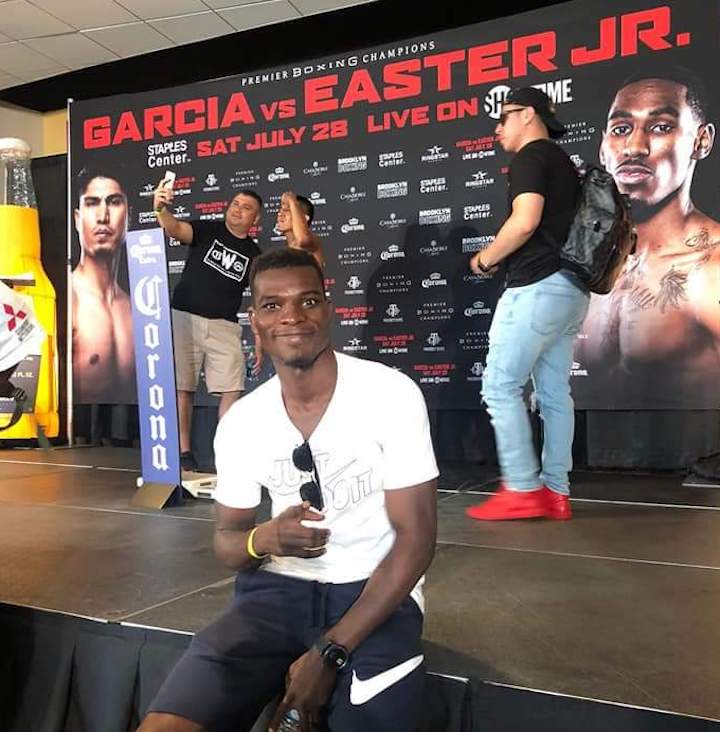 Ghana’s world title chasing Richard Oblitey Commey (26-2, 23 KOs) is leaving no one in doubt of his readiness to fight the winner of tonight’s epic lightweight unification battle between WBC champ, Mikey Garcia and IBF title holder, Robert Easter Jr, by travelling to Los Angeles to witness the fight at ringside at the famous Staples Center.

Commey who is number one contender to Easter’s title and number 4 to the WBC belt held by Garcia, was mandated to fight Easter by the IBF back in March but Easter preferred the unification against Garcia and left Commey in a big dilemma.

The Ghanaian was initially billed to fight on the undercard of the Garcia-Easter fight but opted out and will rather face American born Mexican, Yardley Cruz on a Dibella Promotions bill headlined by Devon Alexander versus Andre Berto at the Nassau Coliseum in New York next Saturday, August 4 in his own tune-up fight.

Commey of course dropped a controversial split decision to Easter when they first fought for the IBF lightweight title back in September 2016 and has incessantly demanded a rematch to set the record straight but Easter has remained elusive, even up to now.

Following another controversial defeat to Denis Shafikov in an eliminator to face Easter in December 2016, Commey came down to Ghana to fight once more, claiming a unanimous decision against Belgium based Tunisian, Hedi Slimani at the Bukom Boxing Arena in Accra to win the WBC international silver lightweight title.

He subsequently signed with Lou DiBella’s DiBella Promotions, under whose banner and a new trainer, he scored a terrific round 6 TKO victory over the previously undefeated Alejandro Luna in San Antonio, Texas in March this year which of course prompted the IBF to write to Easter ordering him to begin negotiations with Commey for a mandatory defence.

Easter of course accepted the unification against Garcia than fight the Ghanaian but keen not to be overtaken by events, 31 year old Commey has taken time off his training regime and is in Los Angeles right in the middle of fight week and even attended the Easter-Garcia weigh-in on Friday, after which he took to social media to update his fans.

“Just living my dream, August 4th is the date. Glory to Jesus,” the highly religious Commey posted along with some photos from the fight venue.

Even more ecstatic were his Streetwise Management advisors who made it clear their boxer is ready to wrestle the world title away from the grasp of either Easter or Garcia.

“Look who’s down at the Garcia v Easter bout for the unification tonight, our very own Richard Commey who will face the winner for the IBF lightweight world title belt next,” read a post on the UK based Streetwise Management’s Facebook page.

“May the best man win tonight, but remember Commey is hungry for you, Commey is coming,” the post added.