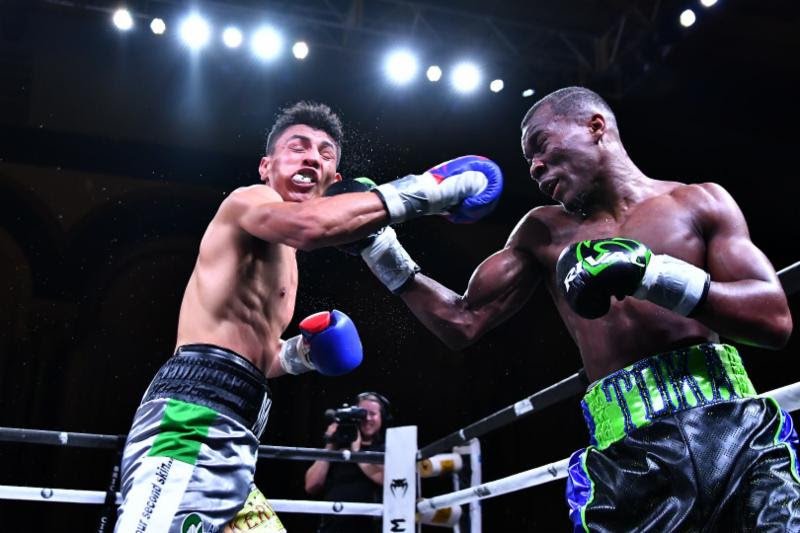 On the eve of Evander Holyfield’s induction into the Atlantic City Boxing Hall of Fame, The Real Deal Boxing made it’s debut in AC with an exciting night of fights at the Adrian Phillips Theater inside Boardwalk Hall.

In the main event, Toka Kahn Clary (25-1, 17 KO) looked sensational against the tough as nails Emmanuel Dominguez (22-7-2, 14 KO) in an exciting back and forth 10 round bout which saw Toka retain his NABA featherweight title by unanimous decision with scores of 96-93 and 98-92 twice.

The Freddie Roach trained Clary, displayed all aspects of his arsenal from speed to power to movement to score the well earned and hard fought decision.

“I feel like tonight was a great learning experience for me.”, explained Clary post fight. “Ten rounds with a game fighter allowed me to work on several things that Freddie has been showing me in camp. I feel like tonight’s performance takes me one step to closer to a world title shot. I am improving with every fight and look forward to what’s next.”

The undercard featured six fights that kept the raucous crowd on it’s feet throughout the night.

The popular Maryland native, Greg Outlaw (4-0-1, 1 KO) stopped Dan Murray (3-1) by TKO in the second round of a 6 round junior welterweight match up.

National amateur champion, Sacred Downing (1-0) made her long awaited pro debut winning a UD over the incredibly game Britian Hart (2-3, 2 KO) in a 4 round super bantamweight bout in which Hart battled on despite a bad cut.

Daiyann Butt (1-0) turned pro as well winning a unanimous decision over Samuel Forjoe (0-3) in a 4 round welterweight fight.

Multiple inductees of the 2018 Atlantic City Boxing Hall of Fame were in attendance including several of Evander Holyfield’s opponents including Ray Mercer, Bobby Czyz and his adversary in one of boxing’s all time great trilogies, Riddick Bowe.

“It was great to see some of my old opponents in the building supporting Real Deal Boxing and having such a great time. It’s nice to be able to share a laugh with them and not a ring.”, explained Holyfield, who will be inducted into the Atlantic City Boxing Hall of Fame tomorrow night.

Meanwhile there’s no rest for a promotion on the rise as The Real Deal Boxing heads to New York City next weekend to continue it’s back to back east coast assault. The Puerto Rican Day Parade Weekend Showcase features a host of New York based Puerto Rican prospects including Edgar Berlanga. The young knockout artist has won 7 straight fights via first round knockout and is fast becoming a star in the Puerto Rican community.

The Real Deal Boxing’s National Puerto Rican Weekend Showcase takes place Saturday, June 9th at Kings Theater in Brooklyn, New York. Doors open at 6pm and first bell is 7pm. Tickets are priced at $150, $125, $75, and $50. Tickets are on sale now and available at www.ticketmaster.com and in person at the Kings Theater box office. For more information visit www.therealdealboxing.com and www.kingstheater.com.

The Puerto Rican Parade Weekend Showcase will also stream live and for free on CBS Digital’s SportsLive OTT so boxing fans across the country can get in on the action.