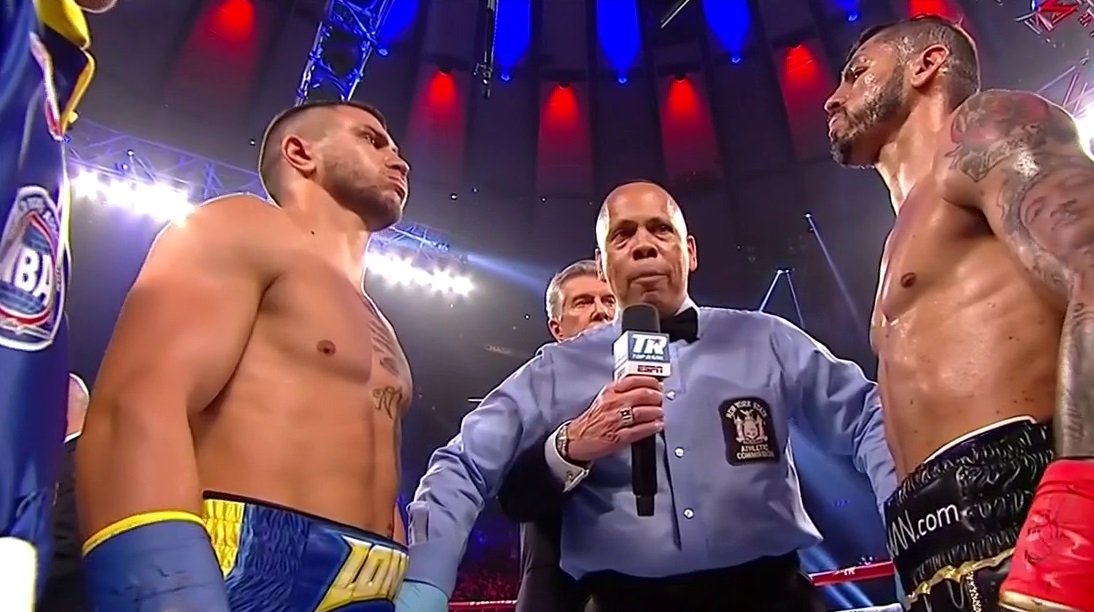 Lomachenko put Linares down with a left to the body in the 10h to get the knockout. The fight was stopped at 2:08 of round 10. Lomachenko tasted the canvas as well in getting knocked down from a hard right hand in the 6th.

Lomachenko was hurt in the 7th from a body shot from Linares early in the round. However, Linares’ face started to swell up in the 8th and 9th from the peppering shots from Lomachenko, and it wasn’t surprising that he finally collapsed in the 10th after getting hit hard with a body shot. At the time of the stoppage in the 10th, the scores were 86-84 for Lomachenko, 86-84 for Linares, and 85-85 even. It was that kind of a fight.

Lomachenko looked like he was out-boxing Linares down the stretch, but he was getting hit hard with perfectly placed shots from the Golden Boy fighter. The size of Linares was a factor in him giving Lomachenko problems. Lomachenko wasn’t used to getting hit with someone as big as Linares, and it was doing damage to him.

The Ukrainian didn’t like getting hit at all, and he was lucky that he wasn’t facing a huge puncher like Mikey Garcia tonight, because he might have seen him go down and stay down.

It’s likely that Lomachenko’s promoter Bob Arum will drag his heals and stall as long as he can before he eventually makes the Mikey Garcia vs. Lomachenko fight. It’s in Arum’s best interest to age Mikey a little so that he loses some of his hand speed, because right now, you’d have to favor him over Lomachenko. He’s too powerful for Lomachenko, and way too accurate with his punches.

News:
Mike Tyson - Roy Jones Has Fans Cheering; Foreman Vs 5 Had Everyone Jeering

Linares was touching Lomachenko frequently with his power shots tonight. Those same shots would have turned into knockout blows with Mikey doing the punching. Although Arum had said this past week that he’d like to match Lomachenko against either WBO lightweight champion Ray Beltran, who he also promotes, or Mikey Garcia, I think it’s likely that he’s going to put him in with Beltran.

Arum says he wants Lomachenko to take that fight, and then face Manny Pacquiao if he gets past WBA ‘regular’ welterweight champion Lucas Matthysse in their fight on July 15. So, it’s academic that Lomachenko will fight Beltran next followed by Pacquiao. Mikey Garcia won’t get a chance to wreck Lomachenko, believe me. He won’t get close to Lomachenko. Mikey must be licking his chops right now after seeing how vulnerable Lomachenko looked against Linares.

Lomachenko is a good fighter, but he’ll lose if he fights a good light welterweight like Regis Prograis. Forget about Lomachenko fighting at welterweight against Errol Spence or Keith Thurman. Those guys would chop him up, not that they would ever be given a shot at fighting him. If Arum is going to put Lomachenko in with a welterweight, it’s going to be Terence Crawford. He promotes him.