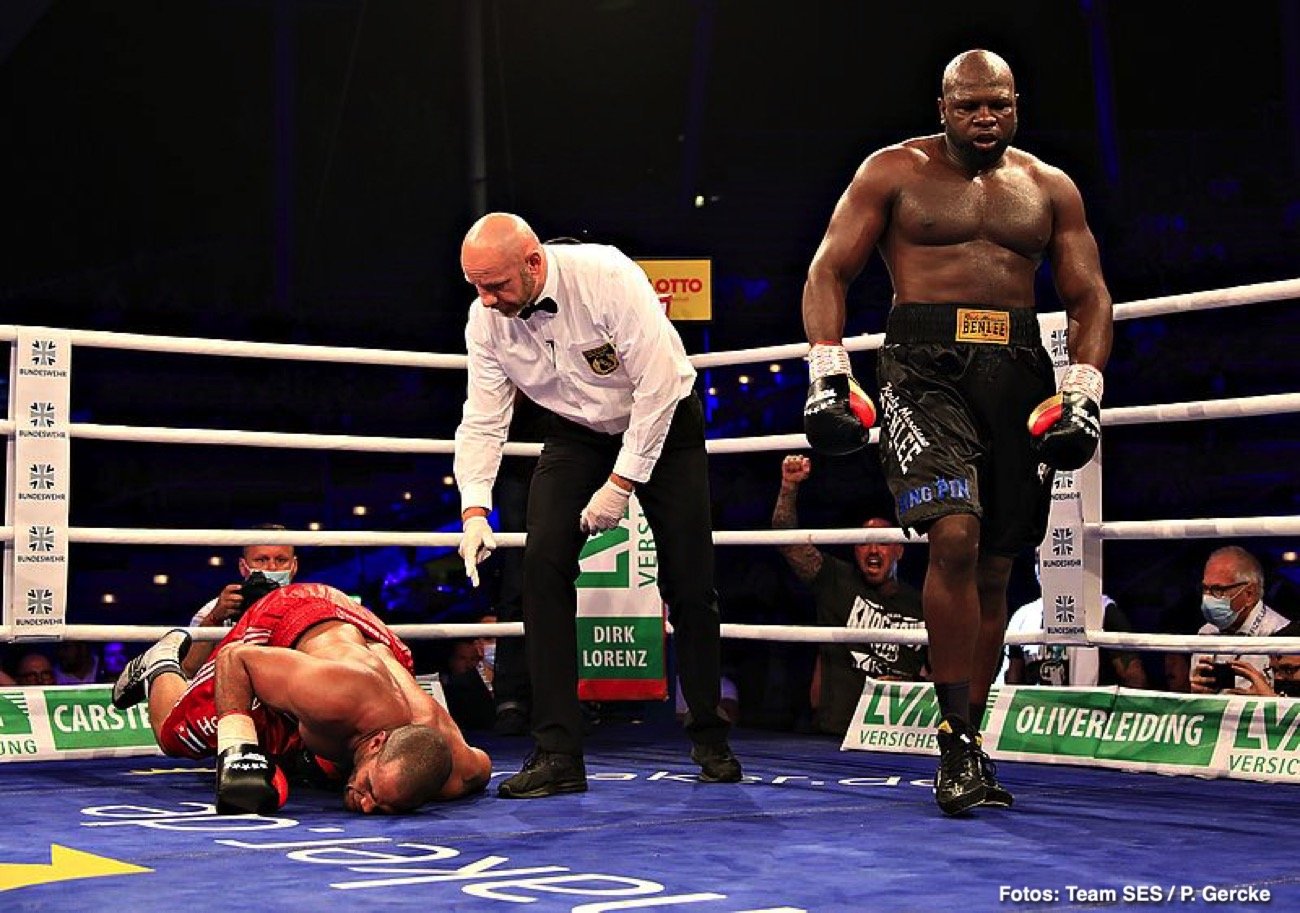 In an impressive performance, former heavyweight world title challenger Kevin Johnson (35-17-1, 19 KOs) showed that he still has a little left in the tank in stopping former IBF cruiserweight champion Yoan Pablo Hernandez (29-2, 14 KOs) in the 8th round on Saturday night at the Elbau Park Floating Stage in Magdeburg, Germany. The official time of the stoppage was at 2:00 of round 8.

The referee then counted Hernandez out as he slowly made it to his knees. There was no way that Hernandez was going to be able to beat the count looking as hurt as he was from the final coup de grace left hook from Johnson.

It was an interesting fight while it lasted. The southpaw Henandez fought well in the early going, but he had no defense for the jabs and the hooks that Johnson was nailing him with.

The 40-year-old ‘Kingpin’ Johnson plodded forward for the first seven rounds, nailing the Cuban fighter Hernandez and wearing him down with jabs and hooks. Although the 36-year-old Hernandez showed brief glimpses of the boxing skills that he had a decade ago, he looked like a shelf of his former self.

In the 4th round, Johnson knocked Hernandez down, and he took over the fight from that point on.

In hindsight, Hernandez made a mistake of choosing Johnson as his comeback opponent. Henandez hadn’t fought in six years since 2014, and he obviously assumed that Johnson would be a safe choice given that he’d lost nine out of his last eleven contests going into tonight’s fight.

The difference is, the guys that Johnson had lost to were quality fighters for the most part, like Danel Dubois, Martin Bakole, Filip Hrgovic, and Nathan Gorman.

If Hernandez is going to continue with his comeback, he needs to face lesser opposition than Johnson because he’s clearly not ready for anyone decent. Returning to the cruiserweight division might be a good idea well because Hernandez isn’t big enough to be fighting at heavyweight.

The way that Hernandez looked tonight, it’s going to be difficult for him to go anywhere in the heavyweight division. His promoters will need to scale back his opposition if they want to start winning because he’s not ready for even halfway decent opposition yet.

Other boxing results on tonight’s card: