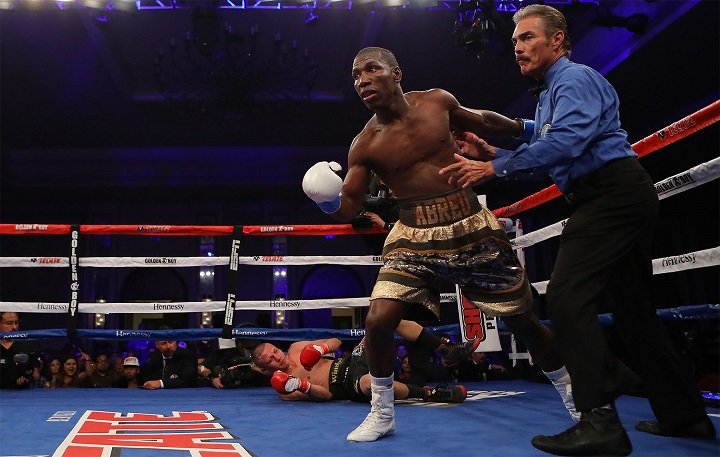 Juan Carlos “Merengue” Abreu (20-3-1, 19 KOs) took a decisive step forward in the welterweight rankings after stopping the experienced Mexican warrior Jesus “Renuente” Soto Karass (28-13-4, 18 KOs) in the eighth-round of the scheduled 10-round main event of the latest edition of Golden Boy Boxing on ESPN at Casino Del Sol in Tucson, Arizona. Abreu, of La Romana, Dominican Republic, outboxed Soto Karass in nearly every round as the native of Los Mochis, Sinaloa, Mexico, pushed forward aggressively. After scoring a knockdown followed by a series of unanswered punches, the fight was stopped at 1:07 of the eighth round.

“I feel great. I’m very happy, and I thank God,” said Abreu. “I knew I would get the knockout. I wanted it, and knew I would get it. I expected a stronger Soto Karass, but he did a spectacular job anyway.”

“I was not expecting things to end this way, but unfortunately they did,” said Soto Karass. “It was a good fight, and that’s boxing: you win some and you lose some. After speaking with my family and with my manager, I’ll decide what is next. I feel proud of my work. I want people to remember me for the great fights I was in. I don’t know what I will do next, but I am satisfied either way.”

Ryan “Kingry” Garcia (12-0, 11 KOs) the exciting 130-pound rising star of Victorville, Calif., scored a third-round technical knockout victory against Pheonix, Arizona’s Cesar Valenzuela (14-6-1, 5 KOs) to defend his Junior NABF Super Featherweight Title in a scheduled eight-round affair. Garcia walked Valenzuela down from one side of the ring to the other, using a high-guard and many feints to help facilitate his aggression. In the first round, Garcia scored a counter left hook that dropped Valenzuela, which he followed with another knockdown in the third round before the fight was stopped shortly after.

“I knew I had him [Valenzuela] and that he would come down sooner or later,” said Garcia. “I feel great. He was moving a lot, but I was able to keep putting the pressure and hunt him down. I knew I would catch him; it was just a matter of time.”

San Antonio, Texas’ Hector “El Finito” Tanajara, Jr. (11-0, 4 KOs) scored a hard-earned eight-round unanimous decision victory against Jesus Serrano (17-5-2, 12 KOs) of Nogales, Mexico in a super featherweight battle. Tanajara won with scores of 80-72, 80-72, 79-73.
“I felt good, even though he was a good and tough opponent,” said Tanajara, Jr. “It was a good experience. I give myself a B+ for this fight. I could have done better all-around. My opponent made it tough because he was short. I need to work on dealing with shorter fighters.”

Topping of the ESPN3 livestream were Rafael Gramajo (9-1-2, 2 KOs) of Garden City, Kansas and German Meraz (58-45-2, 35 KOs) of Agua Prieta, Mexico, who fought to a competitive majority draw after six rounds of a super featherweight bout. After a back and forth fight in which both men landed significant body shots, one judge scored the fight 58-56 for Gramajo, which was overruled by two scores of 57-57.

Cesar Diaz (7-0, 6 KOs), the always aggressive bantamweight prospect of Palmdale, California, scored a fifth-round technical knockout victory against Tijuana, Mexico’s Pedro Melo (17-18-1, 8 KOs) in a scheduled six-round bout. Diaz wore Melo down with a constant attack to the body and head, knocking him down with a shot to the body in the third round that was not ruled a knockdown. Diaz then scored two more knockdowns in the fifth-round, the second of which forced the stoppage at 1:10 of that round.

Christopher Gonzalez (1-0) of Tucson, Arizona opened the night of boxing with a four-round unanimous decision victory against Jesus Arevalo (2-2) of Sierra Vista, Arizona in a super lightweight fight. Gonzalez, who was making his professional debut, won with scores of 40-35, 40-35 and 39-36.

Soto Karass vs. Abreu was a 10-round welterweight fight presented by Golden Boy Promotions in association with Showdown Promotions, and was sponsored by TECATE, “THE OFFICIAL BEER OF BOXING,” and Hennessy “Never Stop, Never Settle.” The event took place on Nov. 2 at Casino Del Sol in Tucson, Ariz.