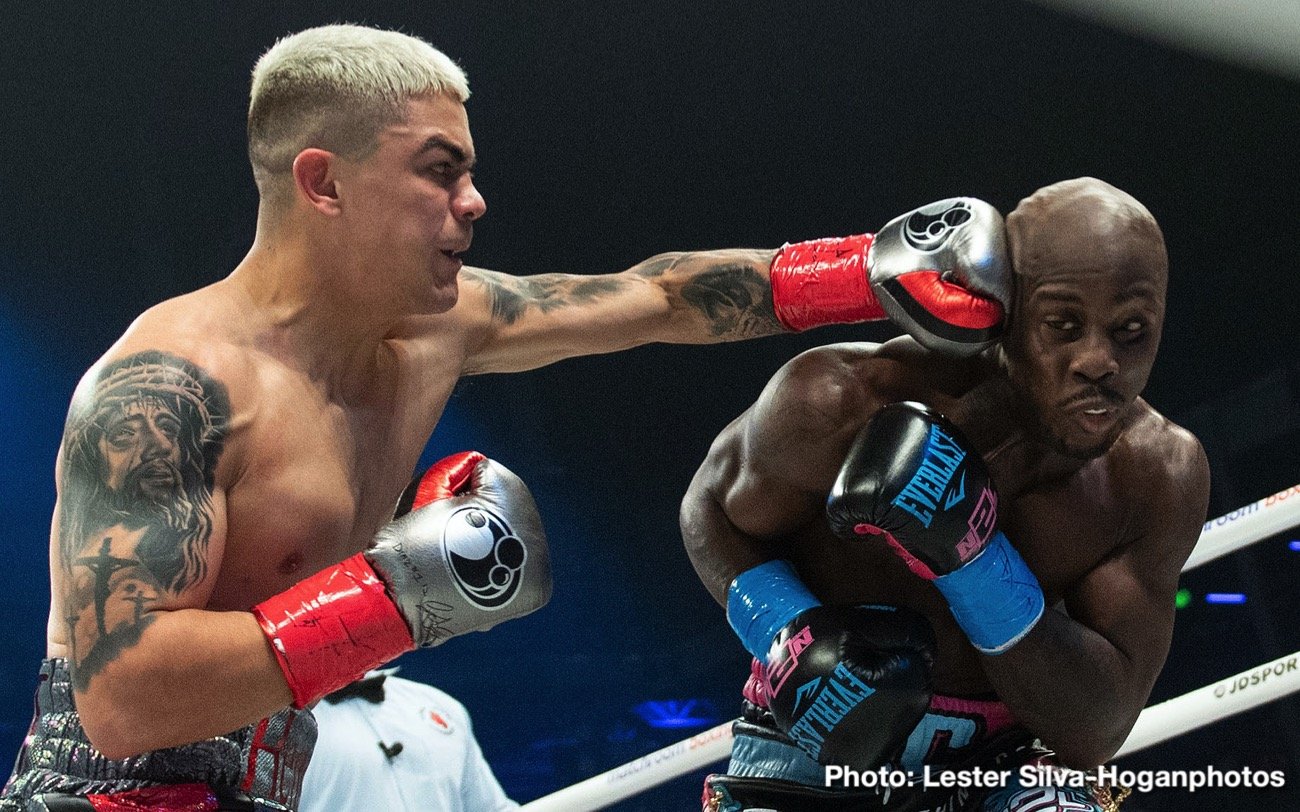 If at first you don’t succeed, try, try, try again. In his third attempt at a world title, Joseph “JoJo” Diaz Jr. (31-1, 15 KOs) of South El Monte, Calif. achieved his lifelong dream of becoming a world champion by defeating Philadelphia’s Tevin Farmer (30-5-1, 6 KOs) via unanimous decision to capture the IBF Junior Lightweight World Title at the Meridian at Island Garden in Miami and streamed live on DAZN. Diaz won with scores of 116-112, 115-113 and 115-113.

“In my previous opportunities, I needed to learn and deal with the adversity that I had been put through,” said Joseph Diaz Jr. “I wanted to be an influence and a person who shows everybody that as long as you believe in yourself, you can overcome everything, any adversity. Despite everything, I was disciplined and focused, and I got the win this time. Tevin Farmer is a hell of a fighter. No matter what you say about him. He’s been through everything. I respect him, and I thank him for giving me the opportunity.

“We are absolutely delighted that Joseph Diaz Jr. is now a world champion,” said Oscar De La Hoya, Chairman and CEO of Golden Boy. “Today is a very special day for us because Diaz Jr. is a young man who we signed about 8 years ago after participating in the 2012 Olympics, and now in his third opportunity he is a world champion. Golden Boy is getting stronger every day, and today’s a perfect example of that.” 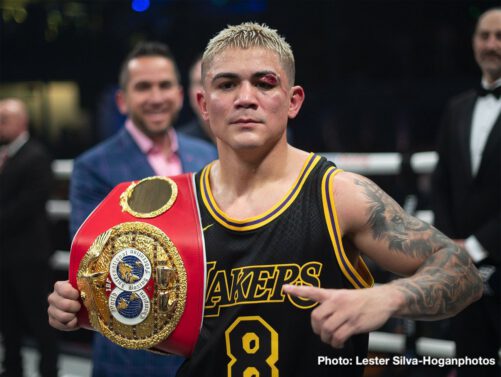 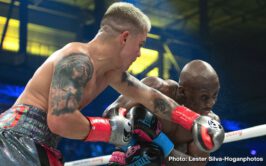 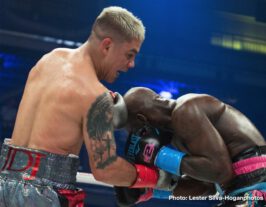 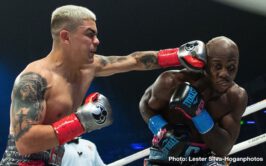 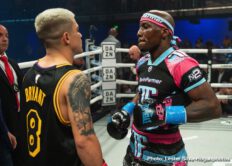 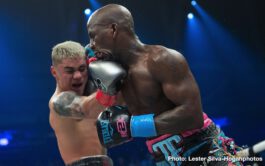 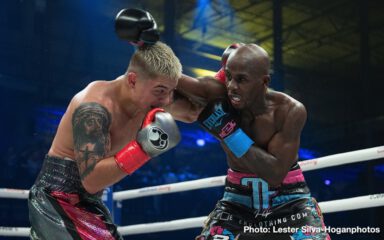 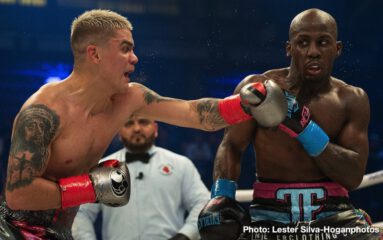 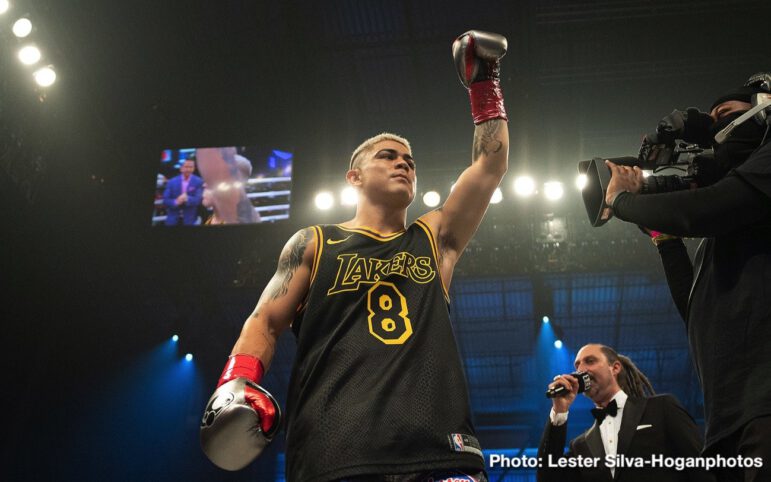 Normatov got things started on Tuesday night when he gained a eight-round unanimous decision over Uriel Hernandez in Toronto.

Normatov resisted a knockdown in round seven en-route to the shutout victory by scores of 80-71.

The 27 year-old native of Brooklyn via Uzbekistan remained perfect as record jumped to 10-0. Hernandez falls to 13-6.

Jones was dominating over the four-and-a-half minute fight, as he featured a strong right hand that continuously found a home on the head of Santiago. Midway through the 2nd round, Jones dropped Santiago with that punch, and the bout was stopped at 1:29.

The 19 year-old native of Toledo, Ohio, Jones, who was a 21-time National Amateur Champion, improves his mark to 6-0 with two knockouts.

Fighting for the first time as a professional in the United States, the 24-year-old Bornea (15-0, 1o KOs) went into the fight rated No. 10 by the International Boxing Federation (IBF) and No. 15 by the World Boxing Association (WBA). He is a former IBF World Youth and World Boxing Oriental Youth super flyweight champion.

Last night on a show presented by Roy Jones Jr. (RJJ) Boxing Promotions, Bornea made a name for himself outside his native Philippines with an impressive victory against Delgadillo (11-1-2, 2 KOs), a former World Boxing Council (WBC) United States super flyweight titlist.

The 10-round main event was split into almost two different fights: Delgadillo effectively jabbed his way to take the early rounds, and he registered a somewhat questionable knockdown in the sixth round. Bornea successfully closed the distance after three rounds, sitting in the pocket and becoming more aggressive as the fight went on.

In the co-featured event, Northern Ireland middleweight Connor “The Kid” Coyle improved his record to 12-0 (5 KOs), needing only three minutes to take care of business. Coyle connected on a crisp combination at the end of round one, hurting his Mexican opponent, Miguel Dumas (11-3, 8 KOs). On the advice of the ringside physician, referee Joel Scobie halted the action after round one for a Coyle TKO win.

In a battle of undefeated Northwest light heavyweights, Seattle’s Richard VanSicien (8-0, 4 KOs) scored a first-round stoppage of Abraham Martin (5-1, 5 KOs), of Oregon, when referee Jack Reiss waved off the fight after one round.