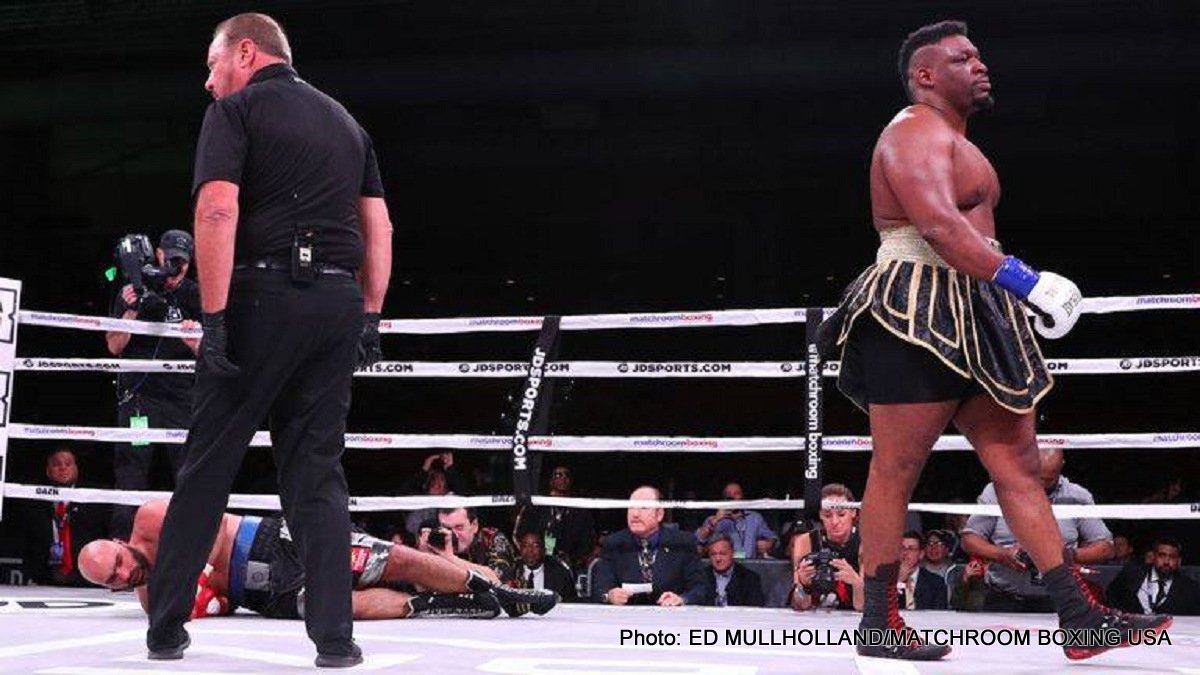 The fight was interesting for exactly two rounds before Miller stepped on the canvas and punished the 6’5″ Dinu with body and head shot.

Miller dropped Dinu twice in the 4th round. The fight was stopped after the second knockdown of the round. Although Dinu looked to be the better conditioned of the two fighters in terms of his physique, it was Miller who had the better stamina of the two. Dinu weighed in at 237 lbs last Friday for the weigh-in, but he was gassed out after just two rounds on Saturday night. The fight was stopped at 2:45 of round 4. Dinu’s fatigue wasn’t the reason he was knocked out.

Dinu was stopped because he was getting hit with huge shots from Miller. Those punches would have knocked out a lot of fighters in the heavyweight division. If Dinu had more pop on his own shots, he could possibly changed the outcome of the fight. Miller was there to be hit the entire, even though he was trying hard to make Dinu miss by using head movement. Miller was too slow with his head and upper body movement to get out of the way of Dinu’s shots. Had this been a bigger puncher like Deontay Wilder, Luis Ortiz or Alexander Povetkin, Miller would have had problems.

Canelo Alvarez Versus The Super-Middleweight Greats

The next step for Miller could be either a fight for the vacant World Boxing Association heavyweight title or a match against IBF, WBA and WBO champion Anthony Joshua. If you ask Miller which of those he’d rather have, he’d probably tell you that he wants the Joshua fight on April 13 at Wembley Stadium in London, England. Joshua’s promoter Eddie Hearn hasn’t ruled out yet a chance of Miller being the one that he picks for the fight.

Easily the most interesting fight on the card tonight was Brandon ‘Bam Bam’ Rios (35-4-1, 26 KOs) vs. Ramon ‘Inocente’ Alvarez (27-7-3, 16 KOs). The 32-year-old Rios came into the fight with a lot of boxing fans believing he’s a shot fighter, but he didn’t look that way in stopping Alvarez in the 9th. Rios hurt Alvarez with some big shots in round 9, which forced the referee to stop the contest.

Rios isn’t major threat at welterweight, but then again he never was. Rios’ best weight was at lightweight where he held the World Boxing Organization title. Once Rios was unable to make weight for the division any long in 2011, he’s been mostly a contender level fighter at 140 and 147. Tonight’s fight for Rios against Alvarez took place at junior middleweight. That’s not going to be a good division for Rios. If he had been facing the top 154 lb fighters in Jarrett Hurd, Jermell Charlo, Erislandy Lara or Jaime Munguia, he would have likely been stopped tonight.

The best thing that could happen to Rios would be for Ramon Alvarez’s brother WBC middleweight champion Saul Canelo Alvarez looking his way to try and avenge his brother’s loss. Canelo isn’t going to start the business of avenging all of his brother’s losses. If Canelo did that, he would have little time extra to face the big money names like Gennady Golovkin.