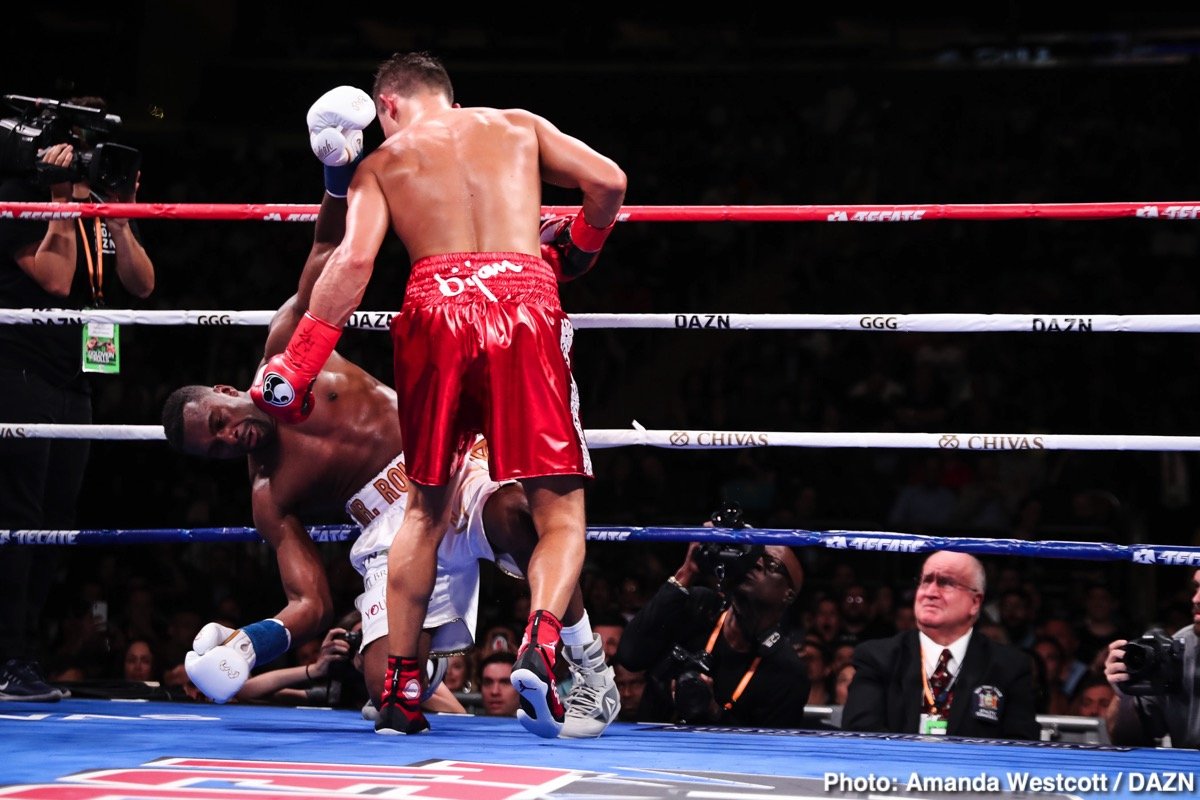 Gennady Golovkin (39-1-1, 34 KOs) picked up his first win in 13 months in stopping Canadian Steve Rolls (19-1, 10 KOs) by booming fourth round knockout on Saturday night on DAZN at Madison Square Garden in New York.

Former IBF/WBA/WBC middleweight champion GGG knocked Rolls down with a crushing left hook to the head that put him down flat on his face.

The only round where Golovkin shined was in the fourth. In the first three rounds, he wasn’t letting his hands go. It was the same thing that we saw in GGG’s two fights against Saul Canelo Alvarez. Golovkin didn’t fight aggressively until the fourth. Once that happened, he was able to stop Rolls, but he didn’t look fast. He wasn’t throwing combinations like he said he would.

Golovkin, 37, wasn’t at his best. He was getting hit with hard shots from Rolls in rounds #1 through #3. Rolls appeared to win the second round when he connected with some big shots. It wasn’t until the fourth round

It was a statement fight for Golovkin to show Saul Canelo Alvarez that he’s ready to fight him in a trilogy contest this September on DAZN. Although GGG called out Canelo Alvarez the fight, Golden Boy Promotions promoter Oscar De La Hoya made it clear that the fight isn’t going to happen yet.

Golovkin made the mistake of not listening to Canelo and De La Hoya when they asked him to fight a world champion for a belt. With everyone tied up right now at middleweight, GGG would have had to move up to super middleweight to take on one of the champions in that weight class.

“I wanted a little more. A little bit more upbeat and a little bit more speed,” said trainer Johnathon Banks. “He got his rhythm at the end of the second round. I knew what was going to happen. If you don’t get in your rhythm, your opponent is going to getting his. I didn’t like the punches he was catching GGG with. Once he got in his rhythm, he started landing his shots. For the knockout, I give him an A, but for the performance, I give him a B plus.”

At this point, it’s hard to know who Golovkin is capable of beating in terms of champions. WBO middleweight champion Demetrius Andrade would be a real handful for GGG. It’s unlikely Golovkin will fight Andrade, even if Canelo chooses not to fight him in September.