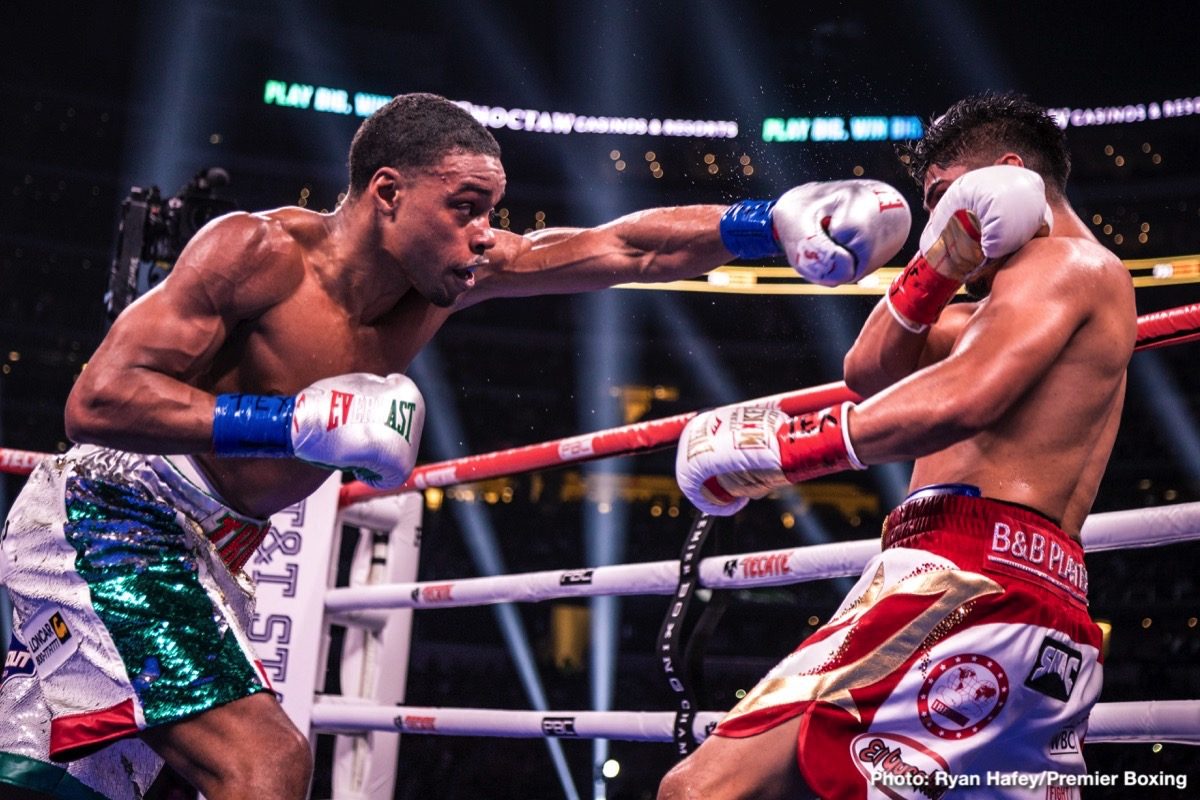 IBF welterweight champion Errol Spence Jr. (25-0, 21 KOs) put on a masterclass performance in decision the smaller Mikey Garcia (39-1, 30 KO) in handing him his first career defeat in beating him by a one-sided 12 round unanimous decision on Saturday night at the AT&T Stadium in Arlington, Texas.

This was supposed to be Mikey’s big moment, but he wasn’t up to the task, and looked like he didn’t put in the effort to shoot for a knockout, which was his only real chance of winning the fight due to his lack of size, power and reach. Mikey didn’t want to go out on his shield, so he stayed on the outside and ate punches all night long.

The scores were 120-107, 120-108, and 120-108. Those were more than fair scores. You can argue that Mikey fought well enough to lose by an 11 rounds to 1 score. But even giving Mikey one round was being kind, because he was out-punched in every round of the fight. Mikey’s shots looked slow and very, very weak. This wasn’t a surprise though, considering that Mikey looked weak in his first at 140 last year when he defeated IBF light welterweight champion Sergey Lipinets by a 12 round decision. Mikey’s punches had nothing on them in that fight. But tonight, Mikey looked like a pumped up featherweight, who didn’t belong in the ring with Spence.

Spence boxed Mike through the first three-fourths of the fight, but then turned it on starting in round nine. From the ninth on, Spence pummeled Mikey with countless shots. After each round, Mikey would raise his hand in a fist to get cheers from the boxing fans, as if to say, ‘I’m winning the fight.’ By the 11th round, it looked kind of pathetic to see Mikey still raising his fist after the round, when he was taking pure punishment from Spence.

After the fight, Spence called out WBA ‘regular’ welterweight champion Manny Pacquiao for his next match. Pacquiao said, “Why not?” Pacquiao was at ringside to watch the fight, and probably wasn’t too surprised to see Spence winning, because he had predicted before the fight that Spence would likely win. When Pacquiao was asked if he wanted to fight Spence, he could have said no. The fans wouldn’t blame Pacquiao if he said he wanted to go after one of the other welterweight champions, but he stuck to his guns, saying that he’s open to fight.

Mikey said after the fight that he would “probably go back down” to lightweight to resume defending his WBC title. If Mikey moved to 140, he would have a lot of tough outs in that weight class against the likes of Regis Prograis, Ivan Baranchyk, Jose Carlos Ramirez, Maurice Hooker and Kiryl Relikh. None of those guys would be easy fights for Mikey. The way that Mikey looked tonight, he’s too weak and flabby to fight at 140 or 147. He’s got to move back down to 135 if he knows what’s good for him.

In another slaughter on the card, former World Boxing Council super midleweight champion David Benavidez (21-0, 18 KOs) beat J’Leon Love (24-3-1, 13 KOs) by a second round knockout. Benavidez, 22, hurt Love with a left hook in round 1. In round 2, Benavidez boxed Love across the ring using his jab and right hand. Once Love ran out of real estate against the ropes, Benavidez hammered him with shots until the referee Lawrence Cole stepped in and stopped the fight. The fight was topped at 1:14 o round 2.

The WBC plan on having a vote with their governing body to decide whether to order a rematch between WBC super middleweight champion Anthony Dirrell and Avni Yildirim, or allow Dirrell to fight Benavidez.