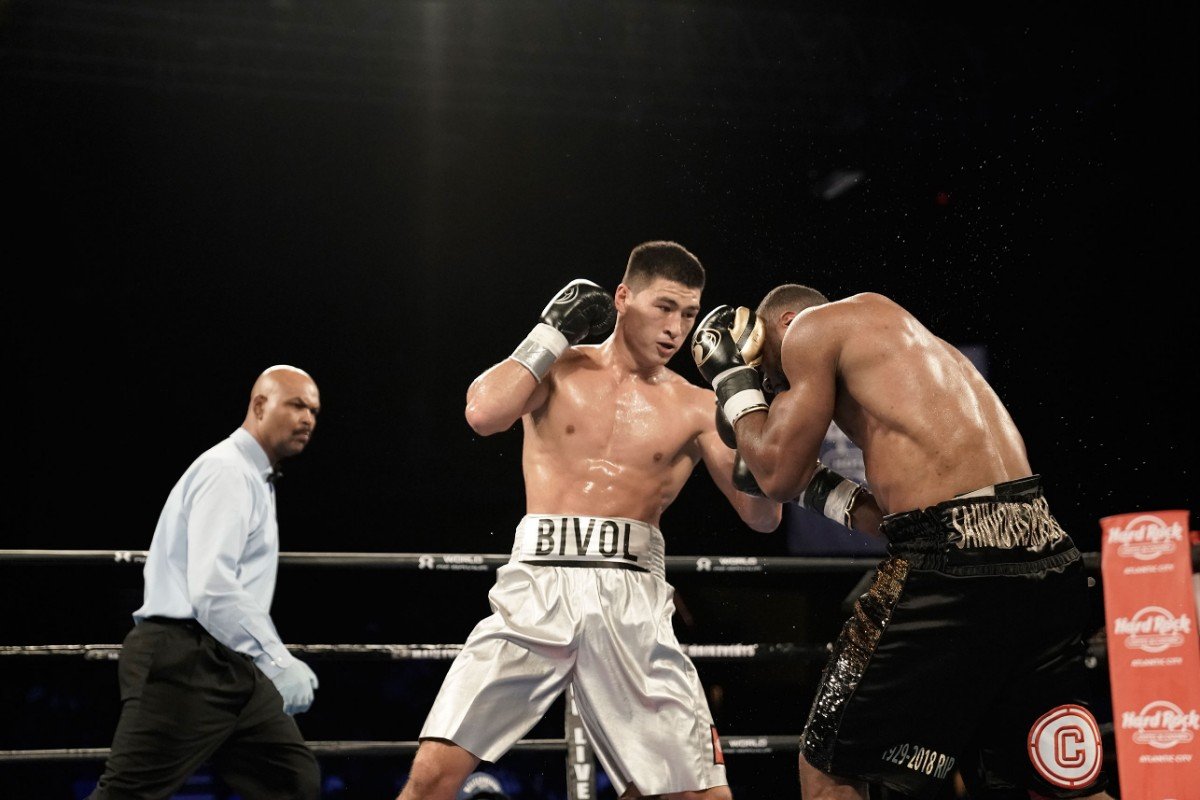 Early in the fight, Bivol’s powerful right hook found a home, repeatedly hitting Pascal and knocking him too off balance to counter punch. Once Bivol saw he could deliver, he became even more aggressive, delivering punches to the body and leaving Pascal will little to offer.

Pascal’s devoted Canadian fans did their best to cheer on their champion. He found a little success in Round 4 landing a few solid punches, but Bivol remained in control of the fight, continue to win rounds.

The former champion decided to marshal all his energy for one final flurry to start the eighth round. Pascal successfully landed several solid punches including a terrific right counterpunch as Bivol responded. But the clock was ticking and Pascal’s fatigue slowly began to build as Bivol wore him down, but he kept coming forward and trading punches with Bivol, thrilling fans at the Hard Rock Hotel & Casino’s Etess Arena in Atlantic City.

As Bivol and Pascal worked toward the final bell, Bivol unleashed one last effort, wobbling but not stopping Pascal. The contest went to the judges’ scorecards, with Bivol winning by scores of 119-109 on two cards, and 117-111 on the third.

“Every time we shoot for a knockout,” said Bivol. “I try to show my boxing skills also. I hope everyone was happy with the fight, and I thank everyone for coming out to watch.

“(Pascal) used his experience and he was powerful in this fight. I used all of my skills to win this fight,” added Bivol.

“Bivol is a great young champion and I take my hat off to him as the top guy at light heavyweight,” said Pascal following the fight. “I was focused and prepared for this challenge, and I gave it my all, but unfortunately it wasn’t enough for me tonight.

“Now I will go back to Montreal with my head held high, enjoy some time with my family, and then after I take some time off I will sit down with (manager) Greg Leon and the rest of my team to see what’s next.”

What does Bivol’s future hold in one of boxing’s most competitive divisions? He has made no secret of wanting to unify the division. “I’m ready to fight (Eleider) Alvarez, (Sergey) Kovalev, or (Badou) Jack. Let’s make the fight,” said Bivol. But he didn’t limit himself to the champions. “Now I’m ready to fight everyone. Either light heavyweight or super middleweight,” said Bivol, who says he can make the 168 pound limit for the right opponent

A decorated amateur and Olympic bronze medal winners now being trained by Joel Diaz, Ahkmadaliev delivers impressive combinations of power punches. He made Zarate eat hard shots to the head and the body round after round from all directions. But Zarate didn’t wobble and kept coming, forcing Ahkmadaliev to keep coming and work hard for the win.

The accumulated punishment from Ahkmadaliev finally convinced referee Eric Dali to step in and stop the fight at 1:17 of the ninth round. Zarate remained on his feet, but was in no position to win and didn’t argue the good call.

“It went almost exactly as we thought it would go,” said Ahkmadaliev. “(Zarate) is a crafty and durable fighter and has a lot of experience. I knew I was to going to go in there and knock him out.

“The game plan was to go to the body and wear him down. I knew I was going to take a lot of punches while doing that and to get the job done. I learned a lot of lessons from Zarate. Now, I only want to fight for belts in the future,” said Ahkmadaliev.

Israil “The Dream” Madrimov of Uzbekistan (1-0, 1 KO) put on an impressive display of power punching against Vladimir Hernandez of Durango, Mexico (10-3, 6 KOs) to win his professional debut by sixth round TKO. He won many new fans with his flashy. performance.

Madrimov scored a knockdown in Round 3, but Hernandez survived the round. Bleeding from a cut over the right eye, referee Harvey Dock kept a close watch on Hernandez, who continued to hang tough as Madrimov delivered accurate power shots from both right and left. Fans in the Etess Arena crowd came to its feet several times for Madrimov during the exciting action.

Dock finally decided Hernandez was too brave for his own good, and stopped the bout at 1:24 of round six. Madrimov picks up the vacant WBA Regional Super Welterweight title for his efforts.

Read:  Jermall Charlo on Dmitry Bivol: "I'm bigger than him"

“It was a debut for the title. The only time it happened in boxing history (before this) was (Vasyl) Lomachenko who fought for a title in his first fight,” said Madrimov. “I’m very pleased. The game plan was to do exactly what I did. I want to make history in boxing, and today was my first step.” Of his opponent Hernandez, Madrimov said, “I wasn’t surprised, we knew he is a very tough guy. When we kill the body, the head will fall.”

A decorated amateur who won the best boxer of the World Series of Boxing in 2017, and a gold medal at the 2018 Asian Olympic Games at middleweight, the 23-year-old Madrimov fought an unusual 10-round bout against a seasoned opponent for his first fight as a pro. Madrimov showed off his gymnastic skills with a roundoff and back somersault to celebrate his win.

Shakhram Giyasov of Uzbekistan (6-0, 5 KOs) wasted no time introducing himself to his opponent, Miguel Zamudio of Sinaloa, Mexico (41-12-1, 25 KOs), scoring a first round stoppage after two vicious knockdowns to remain undefeated. Referee David Fields called a halt to the bout at 2:41 of the round. Giyasov celebrated with a leap in the ring, and stopped for a selfie with his many fans who came to support him on his way out of the ring. It was Giyasov’s sixth fight of 2018.

“We watched the opponent a lot, we knew he was a serious opponent. He has almost 50 professional fights,” said Giyasov. “But we worked on certain things that worked in this fight. I was glad to defeat such a good and experienced opponent. I’m ready for any fight that is given to me, I’m ready for anything in the next fight.”

Sergiy Kuzmin of St. Petersburg, Russia (14-0, 11 KOs) stopped a determined but overwhelmed LaRon Mitchell of San Francisco, California (16-2, 14 KOs) with a sixth round TKO. The “Russian Bear” retains his WBA Intercontinental Heavyweight Title with the victory. Kuzmin scored four knockdowns across three different rounds. Mitchell got to his feet and soldiered on every time, but referee Eddie Claudio decided Mitchell had taken enough punishment at 2:37 of the sixth round.

“The fight was great, the fight went very good, as we planned,” said Kuzmin. Kuzmin said of Mitchell, “He was exciting, but he was more surprised by my punches.” Kuzmin says he will rest a little bit, “then get ready for the next fight, go to training camp and train, train, train.”

In his Atlantic City debut, Logan “Korican Kid” Yoon of Honolulu, Hawaii (14-0, 11 KOs) scored a fifth round TKO win over Hamzrah Sempewo of Mulago, Uganda (12-11, 6 KOs) to remain undefeated. The 20-year-old super lightweight knocked Sempewo down twice in the fourth round. After Yoon delivered more punishment, referee Eric Dali called a stop to the fight at 2:39 of the fifth round.

Despite the stoppage, Yoon was a tough grader. “My performance wasn’t the best, I can always do better. But overall, it was OK. I give it a B-minus,” said Yoon. His plans moving forward: “We’re going back to the gym, training hard, and whatever knowledge we get from God, my manager, and my father, and from inside, that’s what we’ll do.”

Karl Dargan scores a first round knockdown of Moises Delgadillo on the road to a unanimous decision win. Photo: David Spagnolo/Main Events

Karl “Dynamite” Dargan of Philadelphia (19-1, 9 KOs) notched his second victory since returning to the ring, winning by unanimous decision over Moises Delgadillo of Guadalajara, Mexico (17-18-2, 9 KOs). Scorecards were all 78-73.

Dargan inflicted the first damage with a straight right to the nose of Delgadillo at the end of the first round, scoring a knockdown at the bell. Delgadillo came out for round two and displayed his toughness as the pair continued to circle and trade through the end of their eight round lightweight bout.

Dargan said he’d hoped for a better performance. “My performance, it was OK, but not what I expected. I felt good, but I didn’t perform like I felt. Most important thing, he didn’t win and I did.” Dargan says he will make adjustments for his next fight. “It’s not anything I really have to change. Just things that need to be tuned up,” explained Dargan.

Heavyweight prospect and 2016 Rio Olympics gold medalist Evgeny Tishchenko of Russia (3-0, 2 KO) employed a solid body punching attack to lay the foundation for a right hook to the head, stopping Christian Mariscal of Tijuana, Mexico (11-2, 5 KOs) at 1:38 of the second round in the opening bout.

“I’m very pleased, I’m very happy that I had an opportunity to perform on such a big event on HBO Championship Boxing,” said Tishchenko. “One of the last shows, and I am pleased with my performance. I’m hoping to perform many more times here in the United States.” 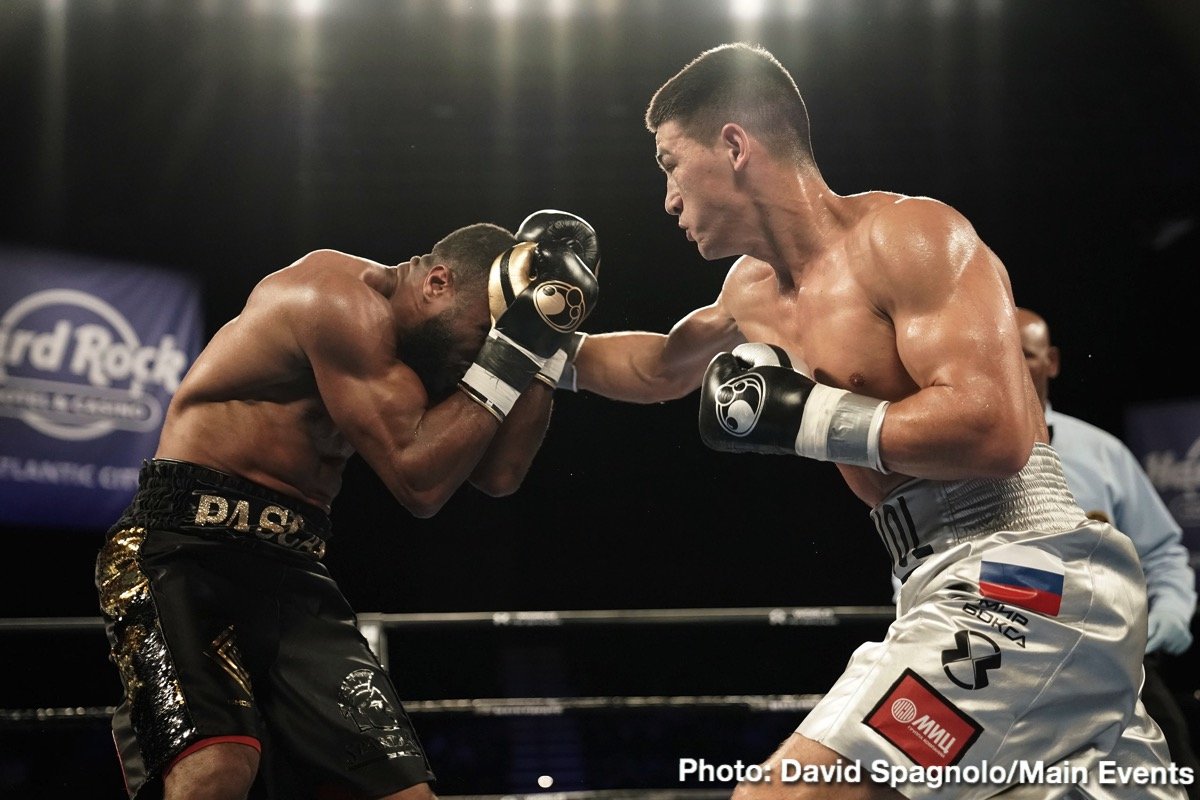 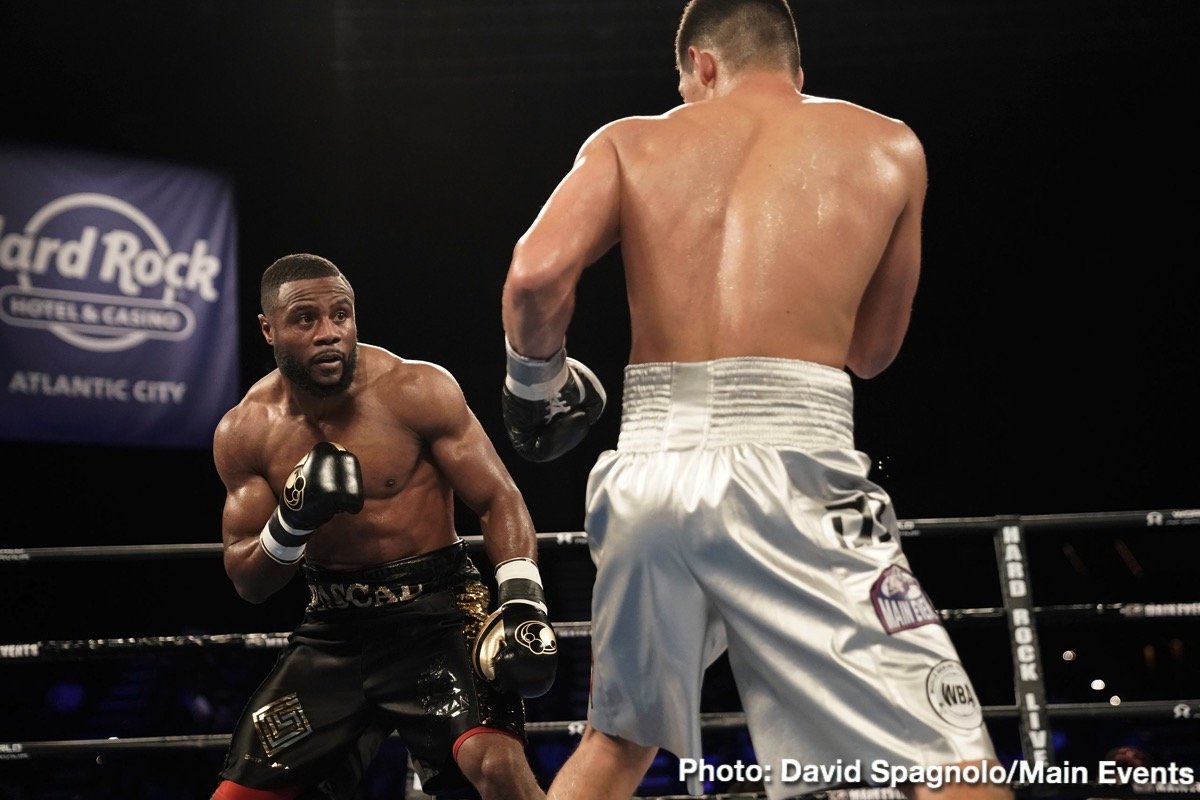 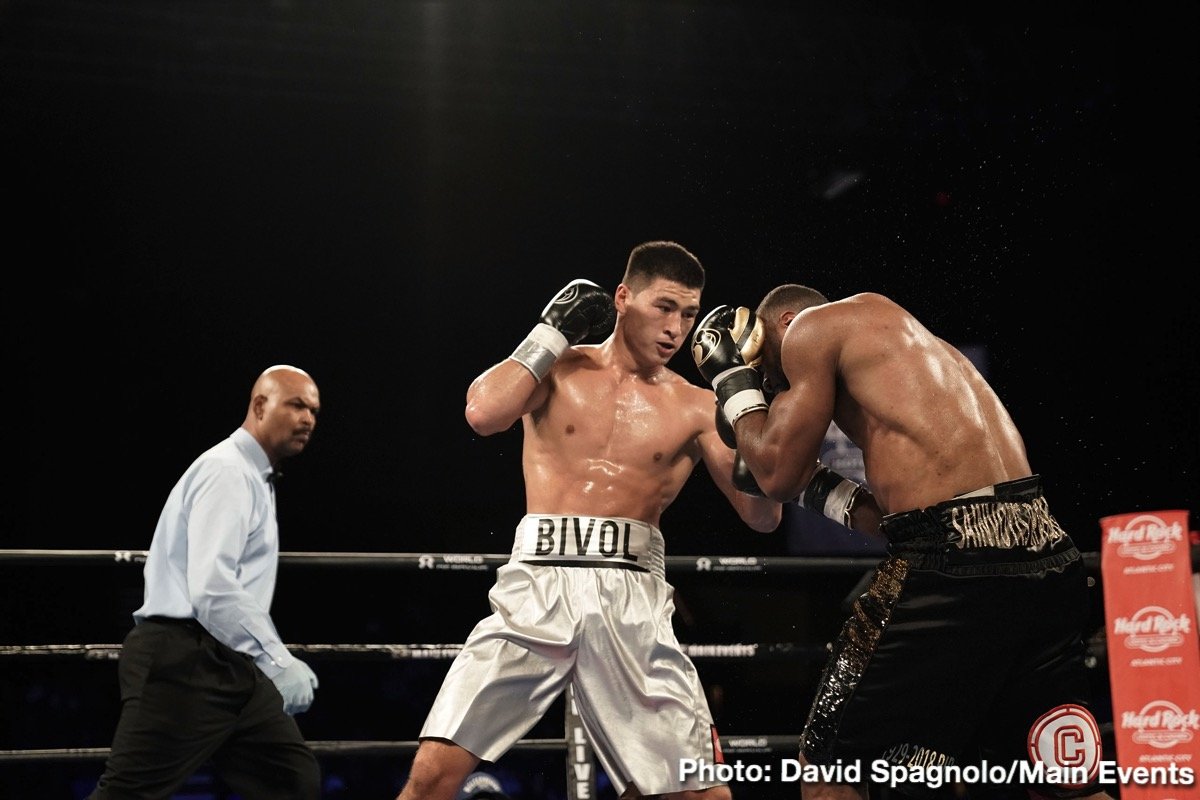 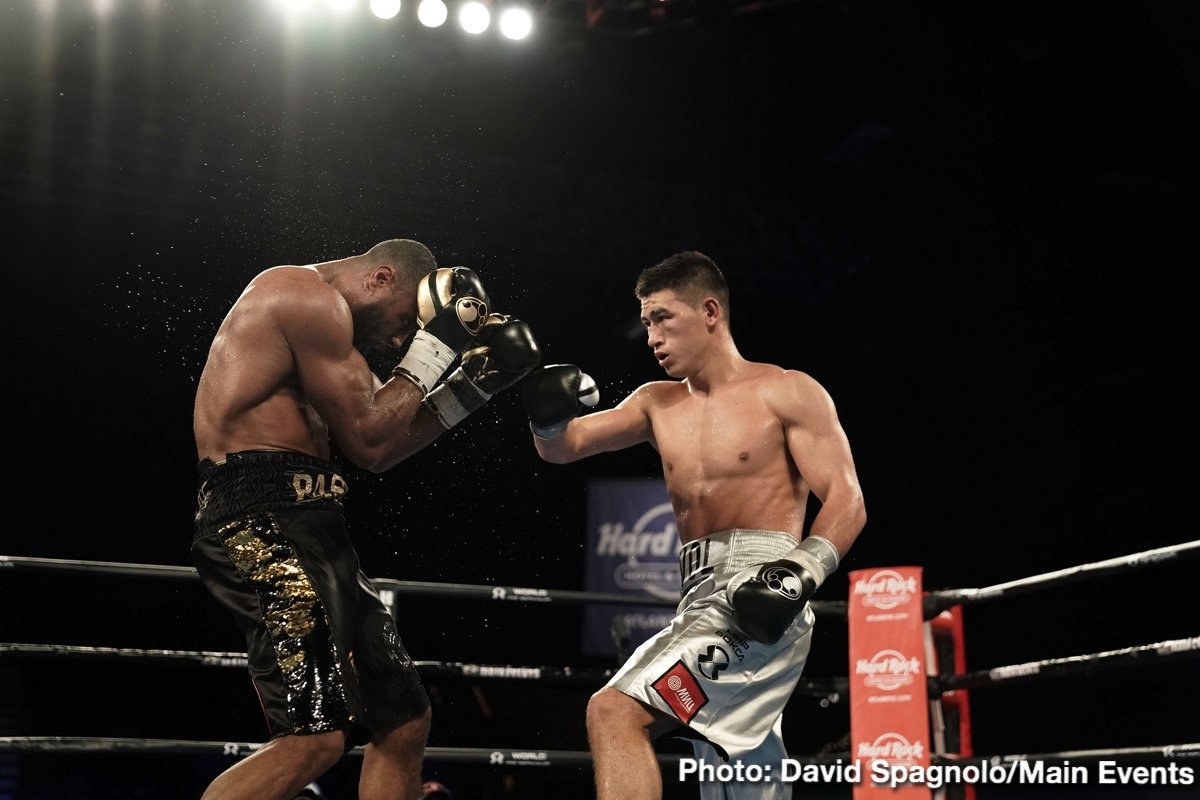 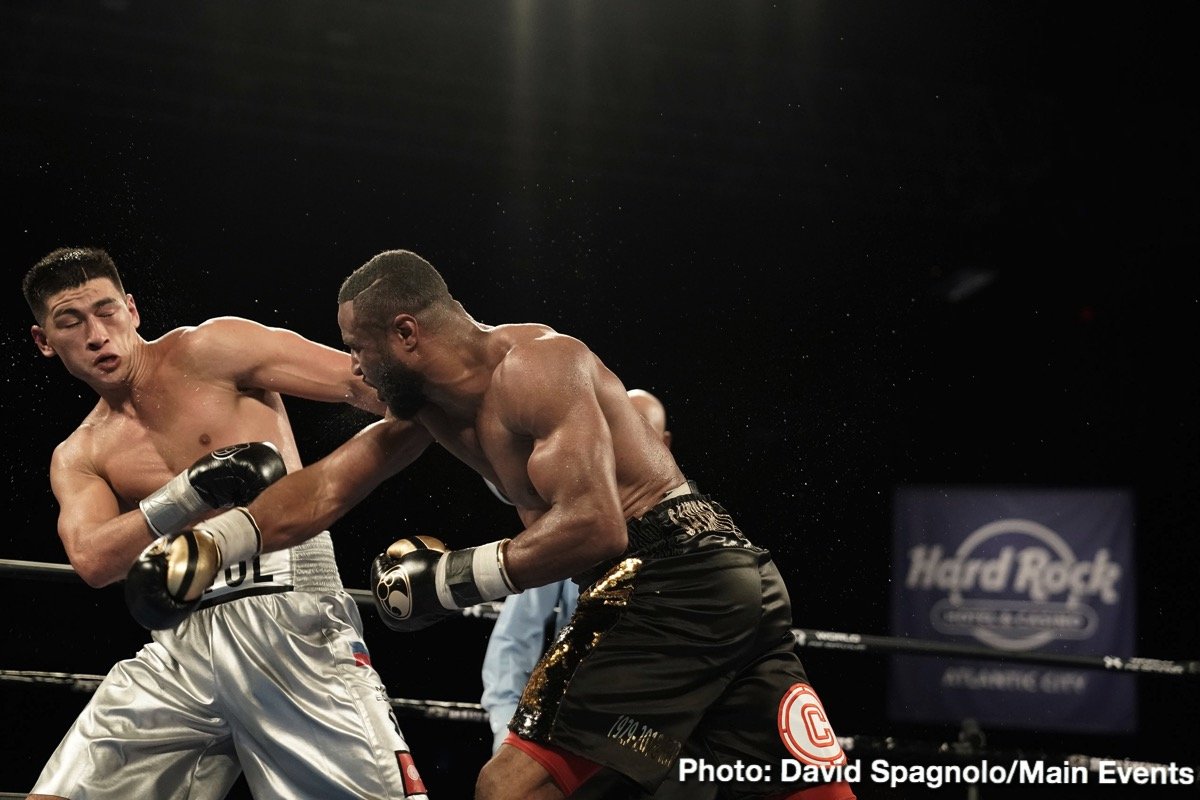