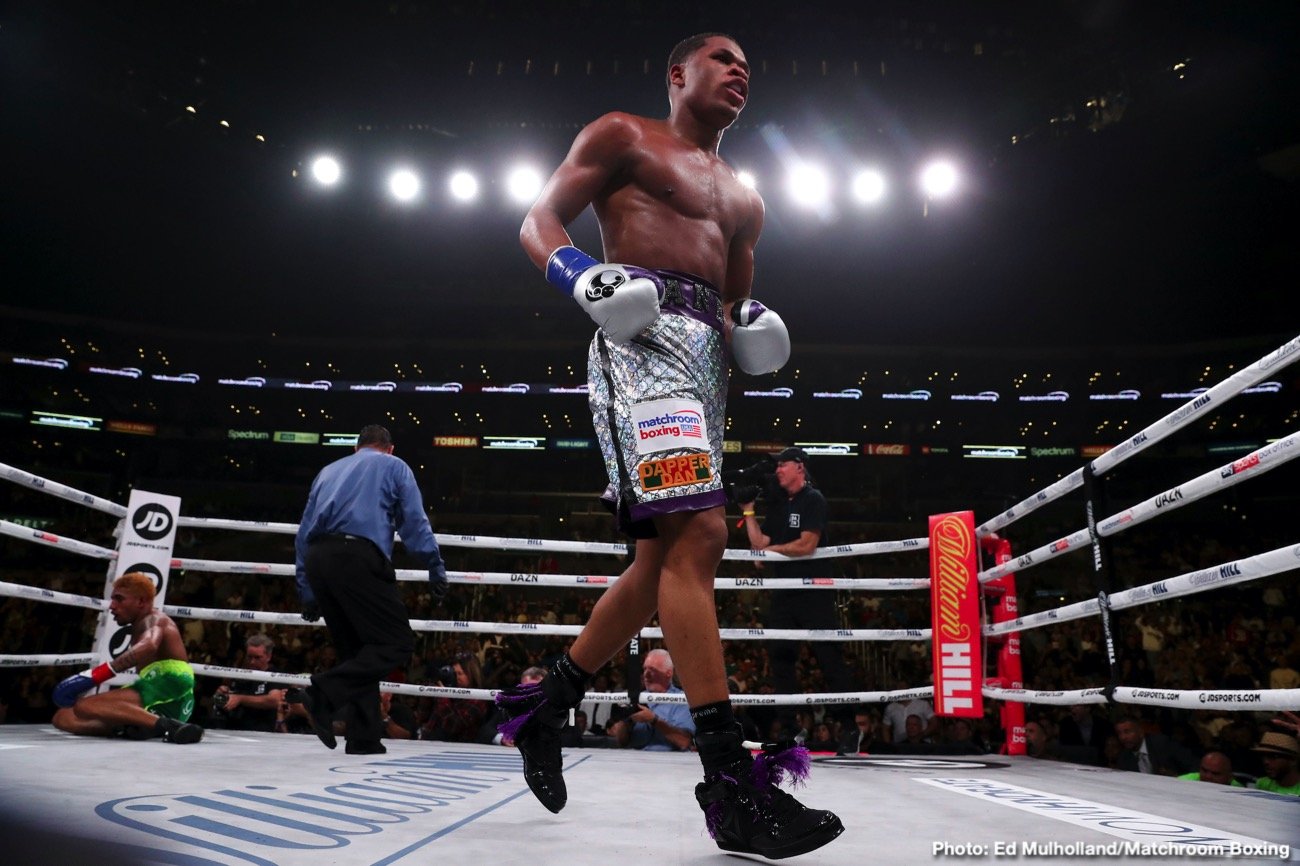 Lightweight world champion Devin Haney (24-0, 15 KOs) defended his belt with a dominating performance over Alfredo Santiago (12-1, 4 KOs) in a 12-round bout, and Billy Joe Saunders (29-0, 14 KOs) earned a stoppage victory over Marcelo Coceres (28-1-1, 15 KOs) in a tough battle during his United States debut.

“I feel alright. In one of the rounds I dislocated my right shoulder. I’m a true champion and still won every round. Not sure what round, but he was on the ropes, I threw a right and over extended. Like I said I’m a true champion, fight through everything. On to the next.

“He was very crafty. I went in there and was able to adjust. I got this opponent on week notice. I’m a true champion and can fight through everything. It’s all experience, and it all comes with the fight game. l got the win, on to the next.

On fight with Ryan Garcia: “I think that’s a big fight. Boxing fans would love to see that fight. Hope we can make it happen in 2020 or 2021. I’m ready to make that sooner rather than later.”

“There’s no excuses. The performance was not worthy Canelo or Jacobs, but I came here five days before. I knew in my head I had to get him out of here. My timing was off my, movement was off, everything was off. I wanted to impress the crowd. Hopefully you enjoyed the KO, all I could do tonight.

“I had a chest and cough, but no excuses. I was not 100% fighting mentally. I was tired, but needed to get him out in the ninth. I just needed to look calm and needed to let him gas. This is the experience I’ve had before. Had to let him gas. Continue to follow me, this wasn’t the best of me.

“Canelo if you want to become four-weight champion, take me now because this is the time to make it happen. I want Canelo. I respect you, you’ve done big things for the sport.”

In a thrilling back and forth affair, KSI (1-0) triumphed over Logan Paul (0-1) in front of a raucous crowd of 12,137 fans at the Staples Center in Los Angeles and live on DAZN. In the fourth round of their six-round bout, Paul knocked down KSI with an uppercut that was ruled illegal and resulted in a two-point deduction. KSI ultimately won by split decision to settle the score following their majority draw in August 2018.

“KSI last time was scared to fight, scared to touch him, scared to get close to him, I just kept going this time. I worked my ass off and kept going. I’m victorious! I’m a dog, I kept saying it. He just hit me in the back of head. It is what it was. I’m happy, happy days. It took about a minute to figure out how I was. I came back at it. That’s boxing, I didn’t stop. I’m going to keep fighting. I’ve never worked so hard. In the ring, in camp, it was tough, but kept going and going. I was on fire. He couldn’t deal with my jabs and he kept moving.’

On the knockdown: “It was a slip. I don’t think he won the round for that. The ref told me it wasn’t a knockdown.”

On this fight vs. the first: “I was more calm, I worked on my conditioning. The more I boxed the more comfortable I get. Boxing is a weird type of conditioning I guess.”

On the point deduction: “My emotions got the best of me. No warning, I got two points taken away from me that’s why I lost. If you do the math that’s I why I lost. I want to contest the commission. I should’ve only got a warning.”

On if he will fight again: “Yes these are the best moments of my life. Yeah you will definitely see me back. I’m going to commission on that.”

Find out more about Fight Season on DAZN ahead of the biggest rematch in a decade featuring Andy Ruiz vs. Anthony Joshua at www.DAZN.com.