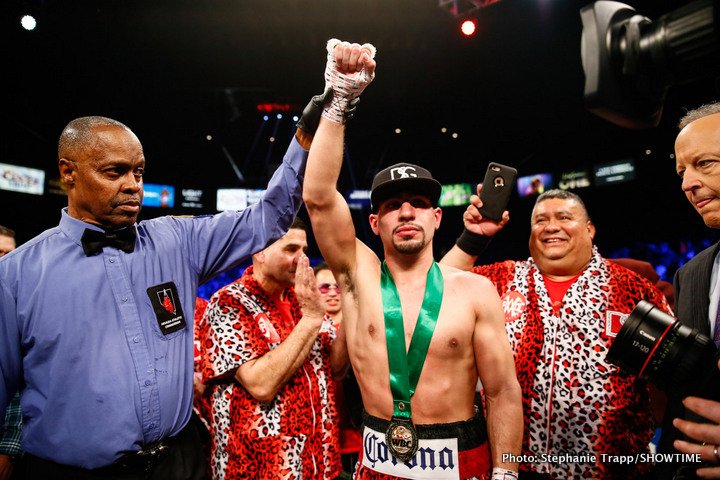 In a predictable outcome, former 2 division world champion Danny ‘Swift’ Garcia (34-1, 20 KOs) stopped a very slow and faded former WBA lightweight champion Brandon ‘Bam Bam’ Rios (34-4-1, 25 KOs) in a 9th round knockout at the Mandalay Bay in Las Vegas, Nevada. Garcia, 29, landed a right hand to the head of Rios in the 9th that put him down flat on his back.

The fight was halted at that point by referee Kenny Bayless. The official time of the stoppage was at 2:25 of round 9. This was the equivalent of a tune-up fight for Garcia, who was coming off of a loss to Keith ‘One Time’ Thurman and am 11 month layoff.

The loss for Rios was his 4th defeat in his last 7 fights. Rios should have had at least 2 more defeats to that list against Richard Abril and Diego Chaves. Those fights took place when Rios was still with Top Rank, and he lucked out in both of them to dodge losses that he clearly deserved. It’s clear that Rios is a journeyman at this point in his career. This was Rios’ second knockout defeat in his last 3 fights. Tim Bradley stopped Rios in the 9th round in November 2015. Danny Garcia equaled that with a 9th round knockout tonight. I think it’s time for Rios to retire before he gets hurt.

Showtime needs to be a little more discerning with the fights that they schedule for their main events because this was a bad one tonight. Rios looked like a punching bag all night. He was so slow, plodding around the ring for the entire fight. Rios was never face even during the prime of his career, but he’s gotten slower and he has no power for the welterweight division. If Rios was still fighting at lightweight then maybe his punches would pack a wallop, but at 147, they have no power on them at all. It would be good if Showtime starts turning down some of these mismatches so the boxing public don’t have to sit through one-sided fights like this.