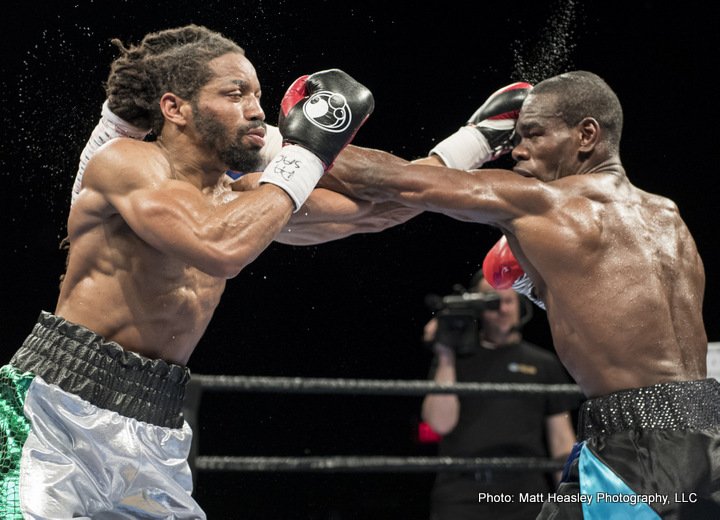 Cherry came out aggressive from the opening bell, landing a strong left hook and backing up Douglas early and often over the first few rounds. Douglas attempted to control the fight with his jab and movement and had some success moving his head to avoid many of the power punches from Cherry.

Douglas did well as he increased his attack to the body in the middle rounds and continued to move backward to avoid the power punches being thrown by Cherry. The differing styles left the judges with a decision to make in weighing the movement and technique of Douglas versus the aggression of Cherry.

In the end, the consistency of Cherry’s attack, who frequently targeted Douglas with combinations to the head, was more effective in the minds of the judges. The final score totals were 98-92 and 96-94 twice for Cherry.

Rosario was the more aggressive fighter in the early rounds, but it was Fulton who timed his opponent first and built up an early lead with a combination of check hooks and power punches. Fulton was patient against the attack-minded Rosario and was able to counter effectively while avoiding Rosario’s power punches.

Fulton continued to have success in the middle rounds as Rosario’s attack slowed, but the Puerto Rican fighter came out with an increased level of aggression in round seven and tagged Fulton during several exciting exchanges.

Despite the increasing pressure, Fulton was able to stay composed and fend off Rosario over the final two rounds on his way to winning a unanimous decision by scores of 78-74, 79-73 and 80-72.

The hometown fighter got off to a slow start as Kielczweski appeared to control the early rounds using his movement and tagging the southpaw with right hands. DeAlba began to work on the inside of his opponent and found more success starting in the fourth round.

Once he had closed the distance, DeAlba began to land hooks to the head and smothered much of Kielczweski’s offense. With an increased emphasis on body-punching in the late rounds, DeAlba turned the tide of the fight in the judges’ minds and earned a unanimous decision by scores of 77-75 twice and 80-72.

Here is what the fighters had to say Tuesday night:

“I take my hat off to Douglas. I thought I pulled out the victory. I tried to press for it but it was a back and forth fight.

“I’m excited to get the win. I beat a great young fighter. I hate when people say I’m old because I work harder than these young fighters. I drive an hour and a half to the gym every day to do this.

“I’m looking for big things. I want to be great and I want the biggest fights out there. I believe I’m going to get a significant fight.”

“I didn’t lose that fight. Period.

“The fight went how I expected it would in the ring. I’ve always been a fan of his. I feel like I fight great competition and I was able to out box him with my jab. He tried to bait me in and I showed I was the better boxer.”

“I feel good winning my first eight-round fight and televised bout. I feel great after that performance. The fight went exactly how I thought.

“I knew he would try to drop combinations on me, but I worked my jab and moved so I would not be in a straight line for his left hand.”

“Fulton is a good boxer. He did not want to fight man-to-man, but he moved well. He was shying away from exchanging with me.

“I thought it was a close fight that could have gone either way. I blocked a lot of his punches with my gloves.”

“It was a great fight. He is a tough fighter and I felt I did enough to get the decision. I out boxed him. He was just looking for one big shot.

“Hopefully this win gets me to another level. He has fought really good opponents, so a win over him gets me to fight bigger fights. I was in great shape. I saw he was tiring and I thought that was the difference.”

“It was a good fight for me and I stuck to my game plan. In the seventh round he hit me with a body shot and knocked the wind out of me.

“It was a close fight but I thought I won 5-3. I could have lived with a draw. He got the close rounds, but every round? Come on.”