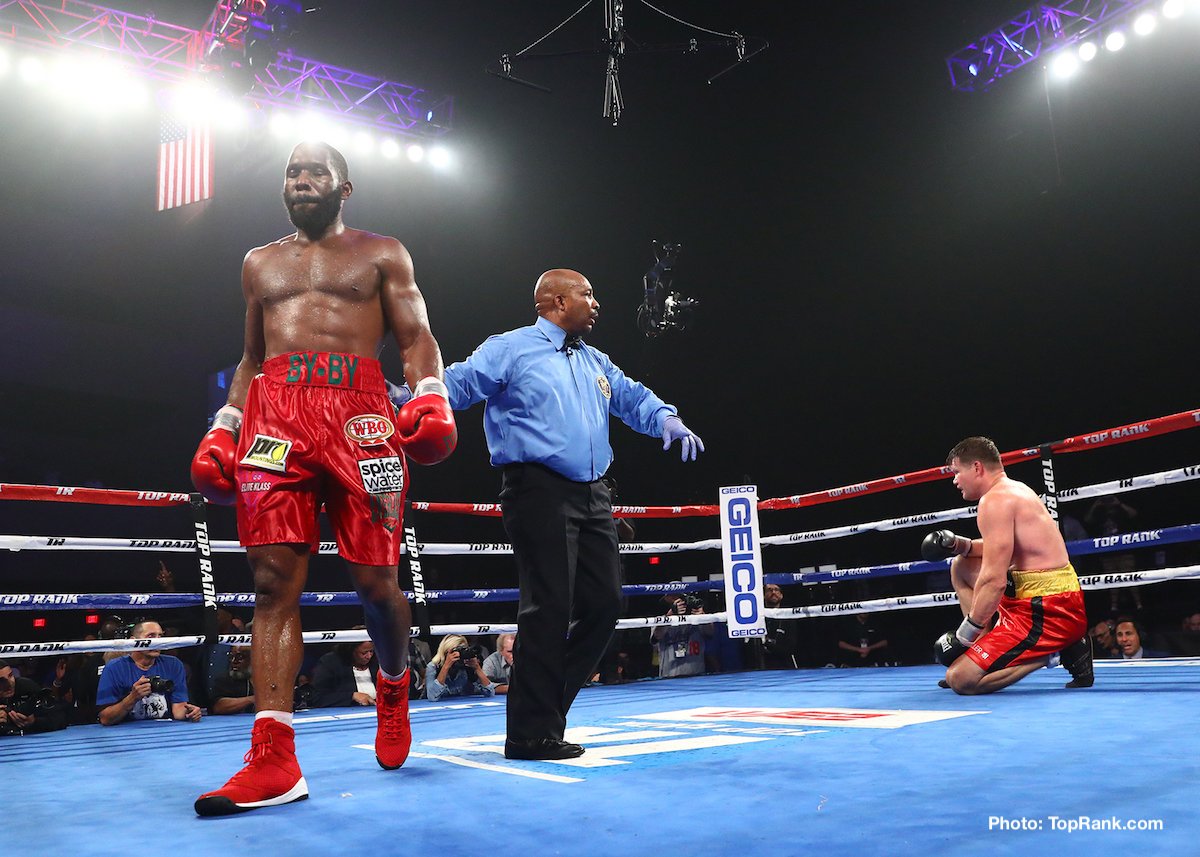 Bryant “B.Y.” Jennings’ climb up the heavyweight ladder continued, as the Philadelphia native got up off the deck to knock out Alexander “Sascha” Dimitrenko to win the vacant IBF International and NABO heavyweight titles in front of 2,543 fans at Ocean Resort Casino’s Ovation Hall.

Jennings (24-2, 14 KOs) was knocked down with a big right hand in the fourth round, but rebounded to knock down Dimitrenko (41-4, 26 KOs) twice in the eighth round. An uppercut in the ninth round sent Dimitrenko to the canvas again, and referee Allen Huggins immediately called a halt to the contest, much to Dimitrenko’s chagrin.

“I was prepared for a tough 12 rounds,” Jennings said. “I did what I had to do. I was in great shape. He’s a big dude. He’s not as slow as I thought. I made adjustments, and I got the job done.”

Said Dimitrenko: “I wanted to continue the fight. I don’t know why the referee stopped it.”

Jesse “Hollywood” Hart’s sledgehammer right hand spelled an early night for Mike Gavronski, as Hart notched a third-round stoppage in defense of his NABF super middleweight title. Hart knocked Gavronski down twice in the third round, with the official time of the stoppage coming at 52 seconds. The WBO No. 1 contender, Hart (25-1, 21 KOs) was not shy about calling out Gilberto “Zurdo” Ramirez for a rematch. Ramirez won a closely contested unanimous decision against Hart in September 2017.

“{Ramirez is} who I want. Give me a chance to redeem myself. He’s talking about going up to 175. Why? I’m right here! Come on, man. Stop with the excuses. I’m right here in front of you.”

READ:  30 Years Ago – When Donovan Ruddock Detonated His “Smash” On Michael Dokes
https://www.youtube.com/watch?v=MMCBhl-t4nk

2016 U.S. Olympic silver medalist Shakur Stevenson moved his record to 8-0 with an eight-round unanimous decision against the rugged Carlos Ruiz (16-5-2, 6 KOs). All three judges scored the bout a shutout, 80-72.

“It was a good performance against a tough guy,” Stevenson said. “I did what I had to do and made it easy. He showed me some things in there. I boxed him and didn’t take any unnecessary chances. We’re looking forward to the next one.”

Joseph Adorno made it nine for nine, stopping Agustine Mauras at 1:39 of the opening round. Adorno (9-0, 9 KOs) has seven first-round knockouts in his young career.

“I’ve been working for five weeks. We had a great game plan,” Adorno said. “He’s gone the distance with tough fighters, and we knew it would be a tough fight. The hard work showed tonight.”

“I was looking for {the knockout}, but it didn’t come,” Carto said. “Next time, I need to set shots up instead of loading up on one big one.”