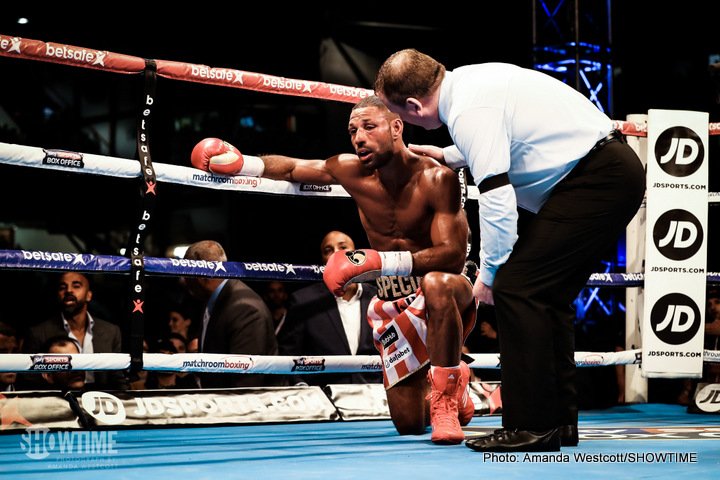 Errol Spence Jr. (22-0, 19 KOs) put in a workmanlike performance in wearing down Kell “Special K” Brook (36-2, 25 KOs) in stopping him in the 11th round to take his IBF welterweight title from him at Bramall Lane in Sheffield, England. Brook quit on in the 11th after taking knee for the second time in the fight.

Brook stayed down for the count as referee Howard John Foster counted him. Brook said that his left eye was giving him too many problems for him to continue. Brook’s trainer Dominic Ingle commented after the fight that Spence’s body shots didn’t have any effect on the outcome. Ingle said it was Brook’s left eye injury that caused the stoppage. In fact, Ingle says Shawn Porter was the harder fight for Brook than tonight’s fight. Never the less, Porter didn’t stop Brook, so it’s irrelevant which fight was harder. Spence won and he’s now the new IBF welterweight champion.

Brook took a knee in round 10 after he hit with a salvo of big shots from Spence. Those punches looked very hard. It’s not surprising that Brook wanted to get a brief respite from the sledgehammer blows from the 27-year-old Spence.

Brook did fight well through the first 6 to 7 rounds. He was making Spence miss with his shots, and keeping him bottled up by holding him a lot. Things fell apart for Brook after the 7th, as he looked tired by that point in the fight and his left eye began to swell up.

The fight was stopped at 1:47 of round 11. Brook might have been able to make it the full distance if not for the eye injury. We’ll never know for sure though. Brook did look tired from the pace and the body shots. Brook’s trainer Ingle wasn’t ready to give Spence much credit for the win, but body work had to have had some kind of impact on the outside, because Brook did not look nearly as sharp in rounds 8 through 11 compared to in rounds 1 through 7.

Spence, a southpaw, had success, jabbing Brook’s left eye all night long. In the first 6 rounds, Spence’s jab was his most effective weapon in the fight. He wasn’t able to land his left hand power shots because Brook was moving his head a lot from the outside to dodge the punches. When Brook would come in close, he would immediately tie Spence up to keep him from getting his shots off. A lot of the time, Spence was forced to throw his body shots while he was being held by Brook.

Brook was controlling the contest through the first 6 rounds. Spence started showing signs of more determination in round 7, as he sat down on his body shots a lot more than he had in the first half of the fight. When the two fighters were tied up, Spence was hitting Brook hard to the body to get him to let go. Those punches seemed to wear Brook down. Brook wasn’t moving well and didn’t look nearly as sharp in rounds 8 through 11.

“Oh, there were no doubts at all, but I have to give myself a B-minus,” Spence said. “I didn’t think I did too good. I think I was a little off on my offense and my defense. I felt like I was behind and I wasn’t as sharp as I wanted to be. I decided to press the action and come forward more and basically break him down and press him out.”

Spence would have done well if he’s started pressing the attack a lot earlier in the fight than the 7th. Gennady Golovkin started applying a great deal of pressure on Brook in the 3rd round of their fight last September, and he had him quitting by the 5th. Carson Jones gave Brook problems in their first fight when he went after him from the 6th round and wore him down almost stopped him in the 12th round. Spence might have been able to knock Brook out quicker if he’d put pressure on him from the start. Spence wasted a lot of time in waiting and fighting at a close pace, which is what Brook likes to fight at.

“I watched some of his fights and he likes to fight at a certain pace,” said Spence. ”Once you pick up the pace on him, he kind of breaks down a bit and he can’t throw a lot of punches. I decided to press the action, make him fight at a pace he didn’t want to fight at. He started breathing hard and slowing down and I knew I had him.”