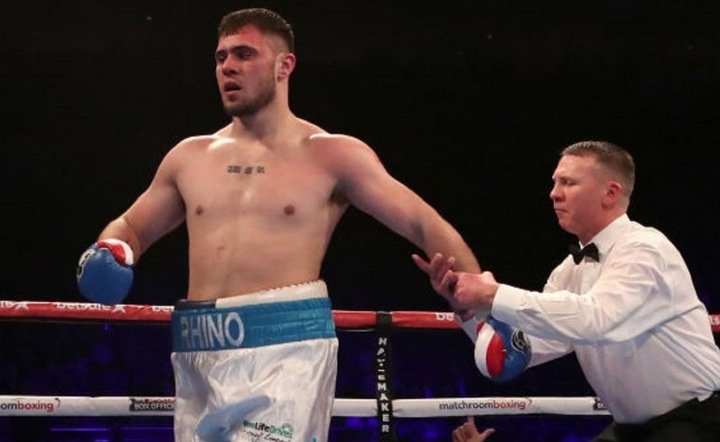 Tonight on the big Sheffield bill, Jamaica’s Lenroy Thomas boxed his way to a very close, even debatable 12 round split decision win over crowd favourite David Allen. Winning by scores of 115-114 twice, the third judge scoring it 115-113 for Allen, Thomas won the vacant Commonwealth heavyweight title.

Now 21-4(10) the 32 year old southpaw boxed on the backfoot throughout, using his nice right jab as well as his sharp counter punching skills. Allen, now 11-2-1(8) was fighting his usual trundle-forward fight, forcing Thomas to work hard and a good number of people – Sky Sports pundit Carl Froch included – felt the 25 year old did more work and was deserving of the verdict.

Factor in the point Thomas was deducted for a low blow in round eight (this point being taken after a number of warnings by the referee) and it was indeed quite a surprise Thomas got the win. Still, a classy Allen had no complaints and both fighters praised the other. A rematch could be a possibility.

A talented fighter, Thomas has been around a while but he has fought quite sporadically – just seven fights since 2010. Tall, athletic and pretty fast, the Saint Petersburg based fighter has been stopped before, three times in all, but he could prove to be something of a late bloomer. Now a belt holder, “TNT” as Thomas is known, can perhaps look forward to a few nice pay days.

An interesting side story to tonight’s fight was how Kenny Porter, father and trainer of Shawn Porter of course, stepped in to work Thomas’ corner after his usual trainer was unable to fly to the UK. Porter was originally on vacation here in the UK, present with his son to scout tonight’s Brook-Spence title fight, but he ended up working instead.

Thomas made the most of his unexpected assistance, winning the biggest fight of his career. In a nice touch, Thomas dedicated his win to the victims of last Monday’s horrific terrorist attack in Manchester.