“I am delighted with this victory – it feels great to conclude the year with this knockout win to defend my NABF Welterweight Title,” said Raul Curiel. “My opponent was strong, but I’m glad we were calm, didn’t rush, and got him with the left uppercut.” 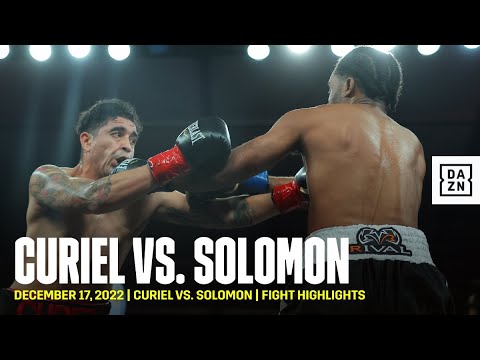 “I respect them as fighters and consider them my friends. However, business is business, and they are just as hungry to become world champions as I am. So, if the opportunity presents itself and I must fight them to become a world champion, I will take it.

Providing chief support to the card, Mexicali, Mexico’s Diego De La Hoya (24-1, 11 KOs) defeated Jose “El Torito” Gonzalez (23-11-1, 13 KOs) of Guadalajara, Mexico via eighth-round technical decision with unanimous scores of 80-70. De La Hoya rocked the tough Gonzalez several times throughout the bout, sending him to the canvas once in the third round and then again in the fifth round. Scheduled for 10-rounds, the bout went to the judges’ scorecards at the eighth-round after an accidental head-butt prevented Gonzalez from continuing due to a laceration over the eye.

“I am happy to have closed out the year with this victory,” said Diego De La Hoya. “He was a good rival, and he was able to withstand a lot of my punches – I almost had him a couple of times. I hope this fight sets us up for a great 2023.”

Golden Boy’s most recently signed blue-chip prospect, Aaron Silva (11-0, 8 KOs) of Monterrey, Mexico showed up and impressed inside the ring, knocking out tough challenger of Guaymas, Mexico Alan Campa (18-7, 12 KOs) in the fifth-round. The two fighters went toe-to-toe, exchanging heavy blows throughout the scheduled six-rounder, Silva rocking Campa in round two by catching him on the ropes with a flurry of punches.

“I am very happy and content with this win,” said Aaron Silva. “I wanted the knockout in the second round, but the fifth round isn’t too bad! My opponent was very strong and had a tough punch. People can expect more spectacular knockouts from me in the future.”

A Golden Boy fan-favorite, Jousce “Tito” Gonzalez (14-0-1, 12 KOs) of Glendora, California participated in a 10-round super lightweight fight against Ivan “Macanon” Cano (26-11-2, 16 KOs) of Mexico City, Mexico. The fight went the distance, Gonzalez standing strong against Cano’s headbutting, holding, and hitting behind the head that resulted in a cut over Gonzalez’s right eye. The judges unanimously scored the bout in favor of Gonzalez with scores of 97-93, 98-92, and 98-92.

“It was a tough and ugly fight,” said Jousce Gonzalez. “He kept head-butting and gave me a cut over my right eye. But that’s boxing – you have tough it out to secure the win.”

In a battle of undefeated prospects, Rio Colorado, Mexico’s Angel “Chocolatito” Vazquez (12-0, 6 KOs) won via unanimous decision against Nick “Slicknick” Sullivan (6-1, 1 KO) of Norfolk, Virginia in a six-round lightweight matchup. Sullivan took a knee in the second round and was given an eight count in the sixth round. Vazquez lost a point in the fifth round for continuously pushing down Sullivan’s head after several warnings from the referee. All three judges scored the bout 55-57 in favor of Vazquez.

Culiacán, Mexico’s Martin Leon (15-2, 10 KOs) participated in an eight-round lightweight scrap against Ricardo “Conejo” Quiroz (12-1, 6 KOs) of Oxnard, California. Quiroz pulled the upset, with judges unanimously scoring in his favor with scorecards of 74-78, 73-79, and 73-79.