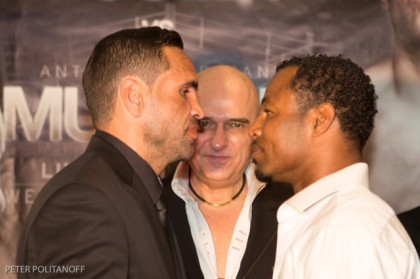 SYDNEY, AUSTRALIA (September 18, 2013)—On Wednesday night October 23rd, It will be an historic night of boxing at the Sydney Entertainment Center in Sydney, Australia when former three world champion Anthony Mundine (44-5, 26 KO’s) battles six-time world champion and future Hall of Famer “Sugar” Shane Mosley in a twelve round Jr. Middleweight bout for the WBA International championship.

The fight is promoted by Vlad Warton’s Millennium Events and Golden Boy Promotions.

Warton, who has promoted big fights all over the world, believes that this fight will be undoubtedly one of the biggest fights in the history of Australia.

That’s a big statement considering fights that fights such as the 1992 rematch between Jeff Fenech and Azumah Nelson as well as a fight that Warton promoted in 2003 between the great Kostya Tszyu and Jesse James Leija drew 40,000 spectators to the Telstra Dome in Melbourne

“This is a fight fan’s dream fight for Australia”, said Warton.

“Because of a legend like Shane Mosley, it will excite the fans of Australia. Because of what he has done in his career, Mosley will have as much support as Mundine on October 23rd. He has fought no one but the best and has beaten a lot of great fighters so to say Anthony has his work cut out for him is an understatement”

“Given the styles and Mosley’s championship experience, I would say he has an edge.”

The promoter points out there are similarities and the differences that will make this an interesting fight.

“While Mundine is slightly younger and taller, Mosley is stronger. You have Mundine coming down from Middleweight and Mosley is coming up from Welterweight. This fight considering the styles will provide huge excitement”

Not since Roy Jones Jr. fought Danny Green in 2009, has a fighter with the superstar pedigree of a Shane Mosley traveled to Australia for a big fight.

“This is a great opportunity to see someone as great as Shane Mosley on these shores. He maybe 42 years old, but he is coming off a great win over a future world champion in Pablo Cesar Cano so we know he still has a ton of gas left in his tank”

Neither fighter can afford a loss at this stage in their career as it will be an extremely tough road back for the loser, yet the winner will get the opportunity for one more high profile fight.

“The winner will get a high profile fight back in the United States while the loser will go back to zero. Anthony knows that this could be his last great opportunity. He is more mature and even though he is a three-time world champion, this could be a career defining fight.”

An American Television partner will be announced shortly.