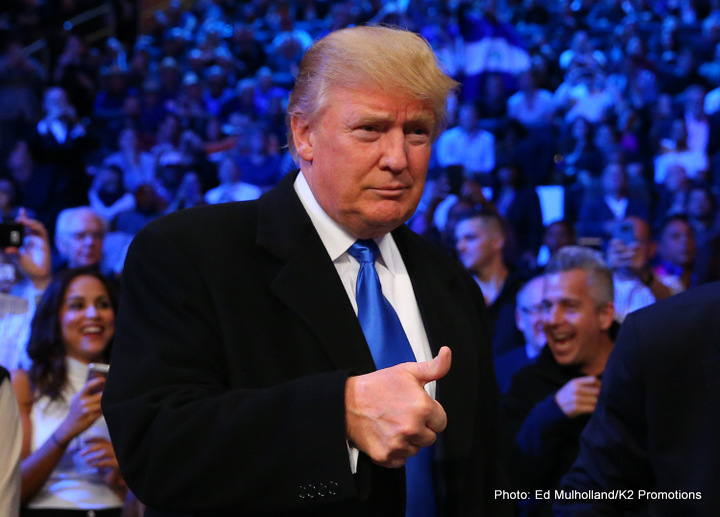 “I am taking this very righteous step, I believe, to correct a wrong that occurred in our history and to honor a truly legendary boxing champion,” said President Trump. “It is my honor to do it. It is about time.”

The brash and outspoken Johnson was convicted of the Mann Act in 1913, a law that broadly made it illegal to transport women across state lines for immoral purposes. He was charged with transporting an alleged white prostitute, Belle Sabreiber who also happened to be his girlfriend, and later his wife. After being convicted for violating the Mann Act by an all-white jury in less than two hours in June 1913, Johnson fled the United States. He returned in 1920 to serve out his one-year and one-day federal prison sentence, which got reduced to ten-months.

Johnson was only convicted because of the racially motivated injustice that took place in America at this time, when people discriminated against African-Americans, especially ones that were dating white women and doing so in public, which was considered a major taboo.

He became the world heavyweight champion and one of the first African-American sports celebrities when he scored a fourteenth-round technical knockout victory over heavyweight titleholder, Tommy Burns in December 1908.

Johnson gained additional notoriety when he defeated James J. Jeffries nicknamed “The Great White Hope”. Johnson proved to be too much for the older and slower Jeffries and scored a fifteenth-round technical knockout in the infamous “Fight of the Century” in July 1910, which lead to deadly race riots across the country. After nine title defenses, Johnson lost his belt to Jess Willard in April 1915 in the twenty-sixth round, which he claimed he took a dive in the fight. Johnson never regained the heavyweight world title.

He finished his career with a 73-13-10 record, which included victories over Hall of Famers, Sam Langford, Bob Fitzsimmons, and Stanley Ketchel. He was inducted into the International Boxing Hall of Fame in 1990.

Johnson, who died in North Carolina in 1946 at the age of sixty-eight from a motor vehicle accident, is considered by most boxing historians a top fifty pound-for-pound boxer and a top ten heavyweight of all-time. His career most likely would have been even better if he was allowed to fight the best boxers in his division and given an opportunity to fight for the world title earlier in his career, which did not happen because of racism.

Finally after 105-years, justice was rightfully granted to Johnson, however, it appeared that this moment would never happen. Despite the strong public support that continued to grow each year and the heavy campaigning on Johnson’s behalf by Senator John McCain of Arizona, Representative Pete King of New York, filmmaker Ken Burns, and actor Sylvester Stallone, United States presidents, who hold the power to issue a pardon for federal crimes, would not do it.

Even when the Senate and the House of Representatives passed a bipartisan resolution in 2016 that strongly urged President Barack Obama to remove Johnson’s criminal conviction, he refused.

Hearn On Saunders And His Chances Of Beating Canelo: He Has No Fear, He's A Bit Crazy
Follow @eastsideboxing