“Like the great John Wayne said, iron and steel, baby,” Fury said. “I give God the glory for the victory. [Wilder] is a tough man. He took some big shots tonight. And I want to say that if it wasn’t for SugarHill, America and Detroit’s own, I wouldn’t have gotten through that fight tonight.  He said, ‘get your jab working, big guy, and throw that right hand down the middle.  That’s how the big dogs do it.’”

“I did my best, but it wasn’t good enough,” said Wilder afterwards. “I’m not sure what happened. I know that in training he did certain things, and I also knew that he didn’t come in at 277 to be a ballet dancer. He came to lean on me, try to rough me up and he succeeded.”

Fury got off to a hot start in the first round, landing quick one-two’s while Wilder worked the jab to the body. A hard right toward the end of the round punctuated it for Fury, as did another in the second.

The action heated up in the third when a big Fury right sent Wilder tumbling to the canvas. The game slugger from Tuscaloosa, Alabama rose to his feet, surviving the follow-up until the bell rang moments later.

With Wilder (42-2-1, 41 KOs) on unsteady legs in the fourth, Fury pounced, looking to finish him off. But just when it appeared that the fight was about to end, the “Bronze Bomber” uncorked a perfect short right followed by another, driving Fury to the mat.

Fury made it to his feet but was down again moments later when another Wilder flurry floored him. The bell rang seconds after he got up.

Wilder started strong in the fifth, blasting Fury with more rights. The “Gypsy King” maintained his composure, digging to the body in close quarters.

The inside work slowly wore Wilder down. He was dropped again in the tenth from another Fury right and then a third and final time in the eleventh via a crunching right cross. Referee Russell Mora mercifully rescued the brave warrior, ending the fight at 1:10 of the round.

“It was a great fight tonight, as good as any trilogy in history,” said Fury. “October 9, 2021, will go down in history, I hope. I always said I was the best in the world and he was the second-best. Don’t ever doubt me.  When the chips are down, I will always deliver.”

In the co-main event battle between two unbeaten heavyweights, Frank Sanchez (19-0, 13 KOs) scored one knockdown on his way to a comfortable, 10-round unanimous decision win over Efe Ajagba.

Sanchez used his superior boxing skills to keep the hard-hitting Ajagba (15-1, 12 KOs) off-balance for the entire fight. The “Cuban Flash” displayed his power as well, flooring Ajagba with a hard right in the seventh. A follow-up left hook which landed a tick after Ajagba’s knee hit the canvas

Ajagba made it to his feet and survived the round but never seriously threatened on his way to the first defeat of his career.

Sanchez said, “I knew I was going to win all the rounds because I’m much better than him technically. I knew that if I connected, he would fall and he did fall. My game plan was always to frustrate him and go in for the attack.”

Robert Helenius was even better against Adam Kownacki this time. In a rematch of their March 2020 slugfest which Helenius won via fourth-round TKO, Helenius battered Kownacki throughout to induce a stoppage at 2:38 of the sixth round.

“I expected [this win] because, what does he have?” Helenius said. “Don’t get me wrong. He’s a good brawler, but I’ve been fighting brawlers for 20 years. I know how to deal with them, even if they are hitting me low or behind the head. That doesn’t bother me.”

Helenius used his height and length to box in the first, working the jab up and downstairs and briefly buckling Kownacki with a right toward the end of the stanza.

Kownacki came alive in the second and third, throwing punches in bunches but earned a warning for two low blows that sank Helenius to his knees. The “Nordic Nightmare” took over from that point on, bloodying Kownacki’s nose and closing his left eye with thudding power shots.

The steady hammering continued until the sixth, when Kownacki landing another low blow. Referee Celestino Ruiz examined Kownacki as he warned him and decide to halt the action.

“Right now, I want to go home to my family,” Helenius said. “I’ve been away from them for four weeks. Then we can worry about what’s next.”

Read:  Arum Feels Tyson Fury's Next Fight Should Be In UK; Whyte, Joyce Both Options

“I was a little anxious in the opening round,” Anderson said. “My first pay-per-view card and all that. But I settled in and gave a great performance. I practiced what my coaches preached. On to the next one.”

Anderson dominated from the opening bell, landing at will. In the second, a series of well-placed power shots drove Tereshkin toward the ropes where Anderson unloaded on his defenseless opponent until referee Kenny Bayless mercifully stopped the fight.

“I got great work in the gym with Tyson Fury,” Anderson said. “Iron sharpens iron. Shout out to Toledo, my home. I hope I made the fans back home proud.”

Berlanga controlled the first half of the bout, flashing his prodigious power which ultimately closed Coceres’ right eye shut. Coceres began opening up in the sixth, catching Berlanga with a stiff left hook. He continued to enjoy pockets of success despite being outgunned.

Coceres’ best moment came in the ninth, when he countered a Berlanga left with a beautiful overhand right. Berlanga crashed to the canvas but the Brooklyn, New York gamely rose to his feet, pressing the action until bout’s end.

Williams got off to a strong start, countering the aggressive Hernández with well-timed counters and opening a cut over his right eye. Hernández never stopped coming forward, utilizing a dedicated body attack to gradually wear down. The non-stop assault culminated in a big 10th round for Hernández, who rocked Williams with a straight left that frame. The round was the margin of victory for Hernández.

Two-time Olympic gold medalist Robeisy “El Tren” Ramirez (8-1, 4 KOs) picked up the most significant win of his young career, using his southpaw stance to befuddle the previously undefeated Orlando “Capu” Gonzalez (17-1, 10 KOs) over 10 rounds in a featherweight contest. Scores were 99-91 2x and 97-93.

Heavyweight upstart Viktor Faust (8-0, 6 KOs) knocked down Mike Marshall (6-2-1, 4 KOs) twice  and finished off the Connecticut native in the third round. 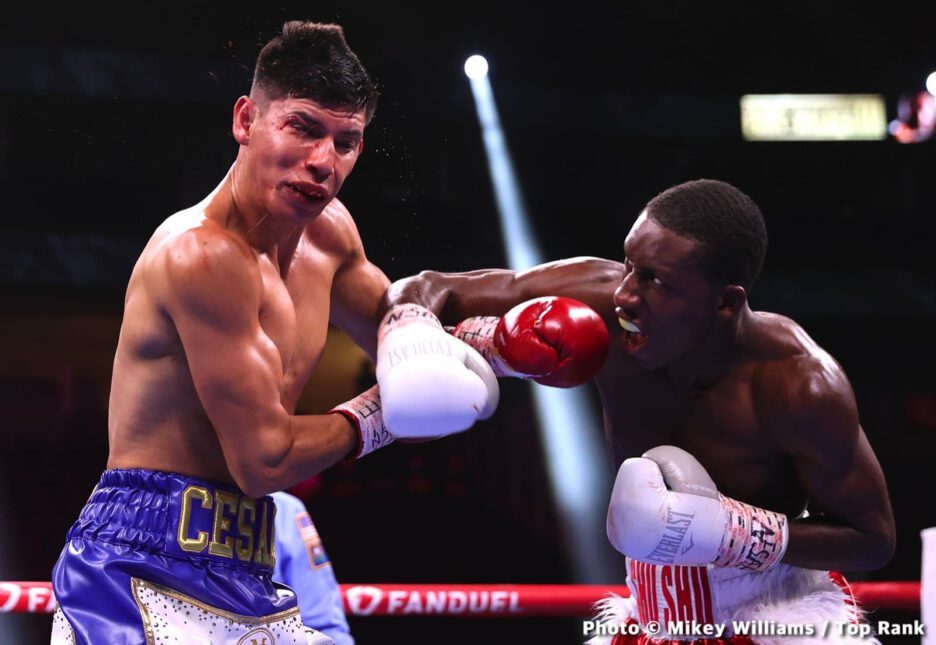 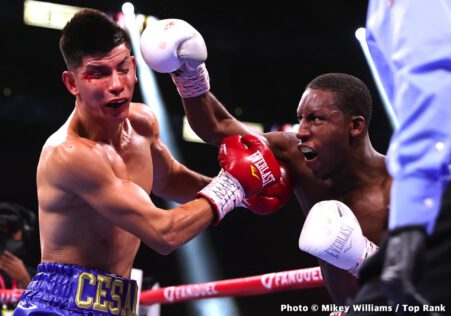 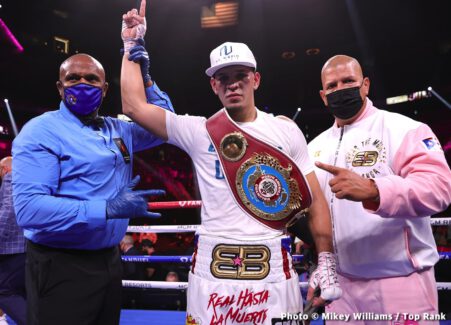 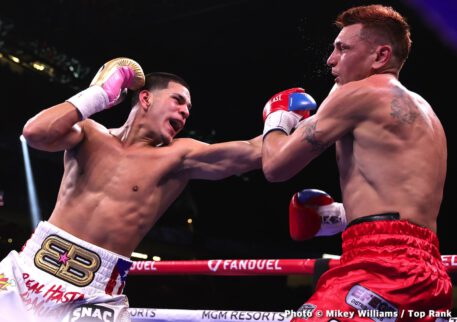 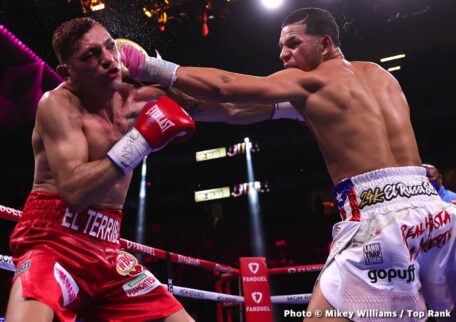 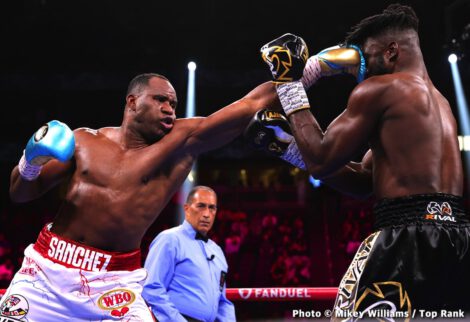 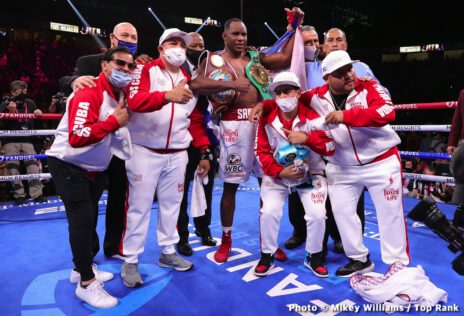 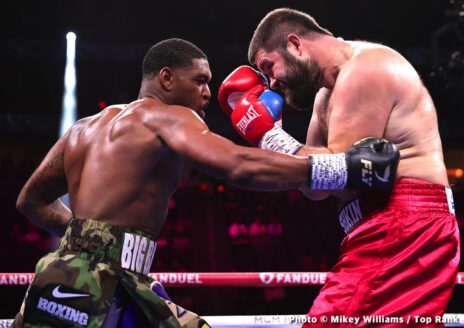 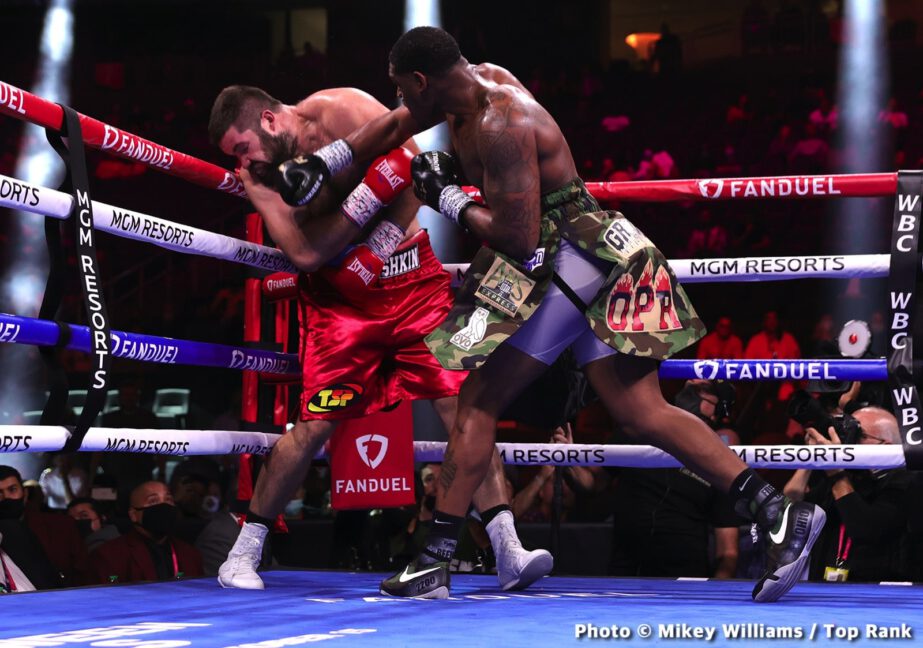 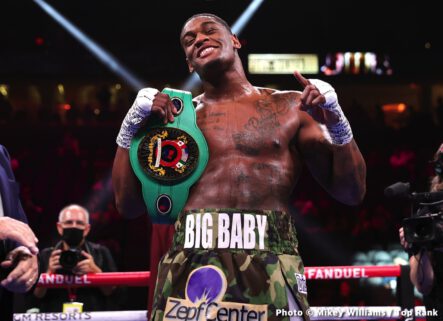 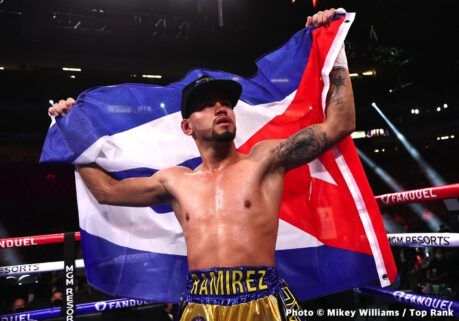 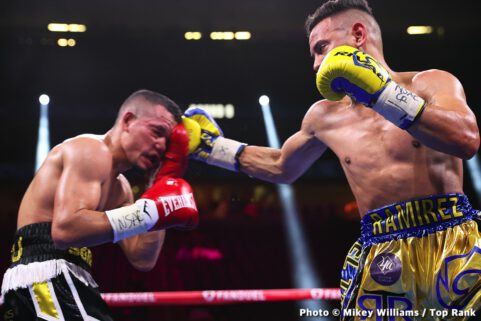 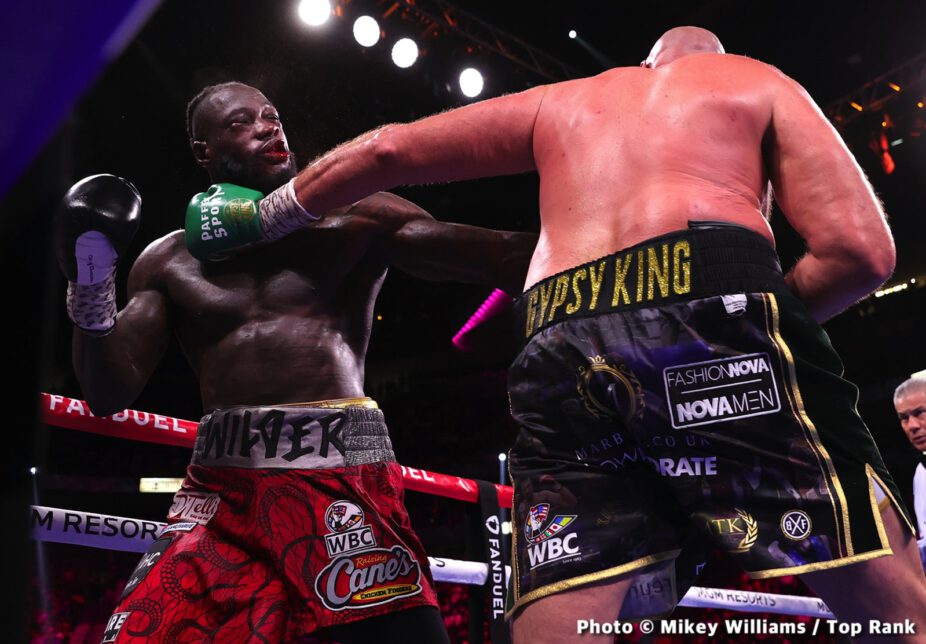 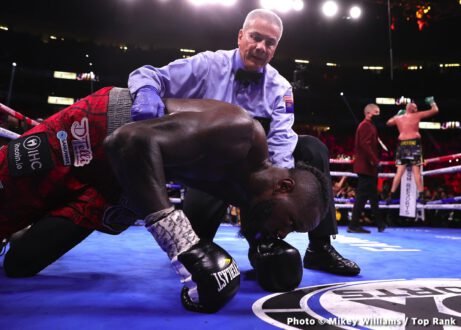 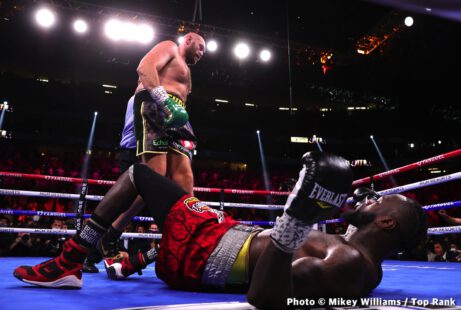 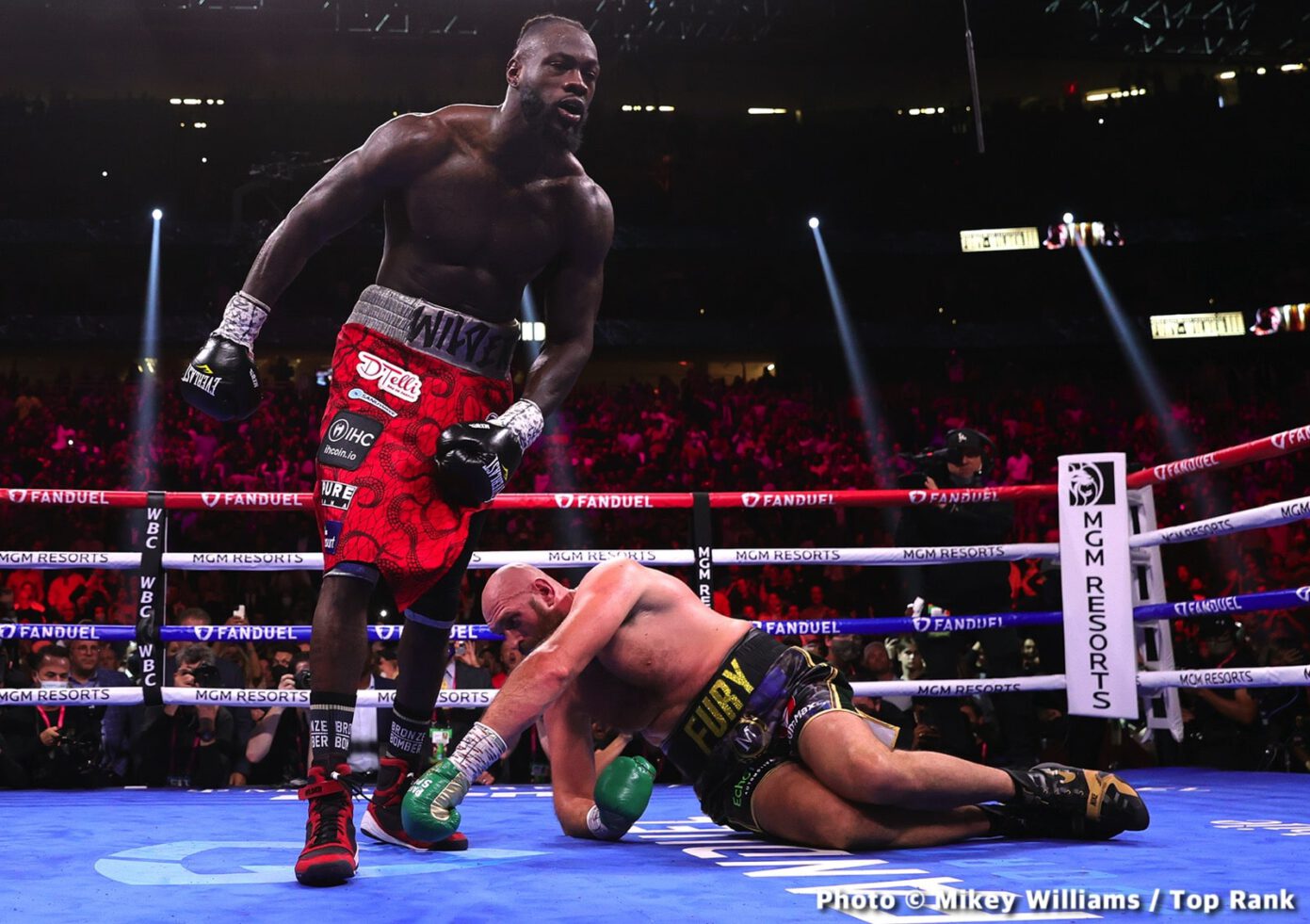