Bruised and cut, referee Mark Nelson stopped the fight with Stevenson pitching a shutout on two of the three cards.

“Around the fifth round, I was landing everything and then he started trying to come on,” Stevenson said. “I smelled blood. I saw he was bleeding and was like, ‘OK, I have to attack the cut. I was trying to touch the cut to make the doctor try and stop it.”

Said Top Rank chairman Bob Arum, “A sensational performance from Shakur Stevenson, who showed why so many think he’s the future pound-for-pound king. Jamel Herring displayed the heart of a champion, but he was in there with an incredible fighter tonight.”

Herring (23-3, 11 KOs) has made a career off of upsetting the odds, bouncing back from a pair of lightweight defeats to become a world champion. He defended his title three times and had designs on derailing a potential pound-for-pound superstar.

“He’s sharp and slick. His hand-eye coordination is very good,” Herring said. “No excuses. He was just the better man tonight.”

Stevenson (17-0, 9 KOs), from Newark, New Jersey, has been destined for stardom since capturing a silver medal at the 2016 Rio Olympics. He had a brief run as a featherweight champion, but had never faced an established world champion until Herring. Stevenson picked Herring apart at mid range, while Herring tried in vain to ugly things up on the inside.

As soon as the fight ended, talk began about Stevenson’s next foe. The top name on his list is the WBC champion at 130 pounds, Mexican star Oscar Valdez.

Junior middleweight Xander Zayas (11-0, 8 KOs) is starting to run away with the 2021 Prospect of the Year. The Puerto Rican sensation won his fifth fight of the year, battering Dan Karpency (9-4-1, 4 KOs) until Karpency’s corner stopped the slaughter after the fourth round. Zayas landed nearly 50 percent of his power shots (81/166) and became the first man to knock out Karpency, who has been a pro for eight years.

Zayas said, “My debut on ESPN, I feel amazing. I stopped a guy that had not been stopped in eight years {as a pro}. I’m blessed to be here. I hope everybody enjoyed the show, and now it’s just back to the gym. Hopefully, I can get on that December 11 show in New York.

“In my last fight in September, we noticed that my left hand was a low a little too much, so this camp we kept the elbows and shoulders up and tried to avoid that right hand. We knew he was going to come with those hooks, so we stayed low. Overall, I think I made an improvement. I showed I could adjust, and I hope everyone enjoyed it today.”

2 Up, 2 Down: Ali Walsh Victorious Again

Nico Ali Walsh (2-0, 2 KOs) had to go a little longer than his one-round August pro debut, but the grandson of “The Greatest” was dominant in knocking out James Westley II (1-1) in the third round of a middleweight special attraction. Ali Walsh ate a couple hard right hands in the first round, and he then knocked down Westley with a straight right hand shortly before the bell sounded to end the second. Westley’s corner stopped the fight following a knockdown early in the third round.

Ali Walsh said, “I’m happy that my pro debut went the way it did. There’s stuff, of course, I have to work on.

“I know the crowd got excited seeing him land a punch, but I did not feel the punch. Maybe it was my energy, my adrenaline, but my hat’s off to him and his team. Mutual respect both ways, and it was a very good fight.

“I’m blessed that I’m following the legacy of my grandfather. I think everyone who loves my grandfather who’s watching me… I love this legacy that I’m continuing.”

Atlanta native Evan Holyfield (8-0, 6 KOs) — following in the footstep of his famous father— knocked out Charles Stanford (6-4, 3 KOs) in the second round of a scheduled six-round junior middleweight contest. Holyfield connected with a looping left hook that staggered Stanford. After a right hand for good measure, Stanford was on the deck and in no position to continue.

In his first fight since representing the United States at the Tokyo Olympics, middleweight Troy Isley (3-0, 2 KOs) made quick work of Nicholi Navarro (2-2, 2 KOs), knocking out his overmatched foe in 2:48. At the end of the round, Isley connected with a three-punch combination that sent Navarro to the mat.

The identical 40-36 cards did not tell the entire story. Featherweight prospect Haven Brady Jr. (4-0, 3 KOs), from Albany, Georgia, withstood the right hand barrage of Roberto Negrete (3-1, 1 KO) to win the four-round battle of unbeatens. Negrete had his moments pushing Brady to the ropes, but the judges preferred Brady’s cleaner punching.

Welcome to the pro game, Antoine Cobb. The junior welterweight from Chicago needed only 58 seconds to win his professional debut, as an overhand right sent Jerrion Campbell (2-2) tumbling into the ropes.

Brooklyn-born lightweight prospect Harley Mederos (2-0, 1 KO) went the distance for the first time in his career, shutting out the game Deljerro Revello (0-2) over four rounds by identical scores of 40-35. Mederos knocked down Revello in the opening round. 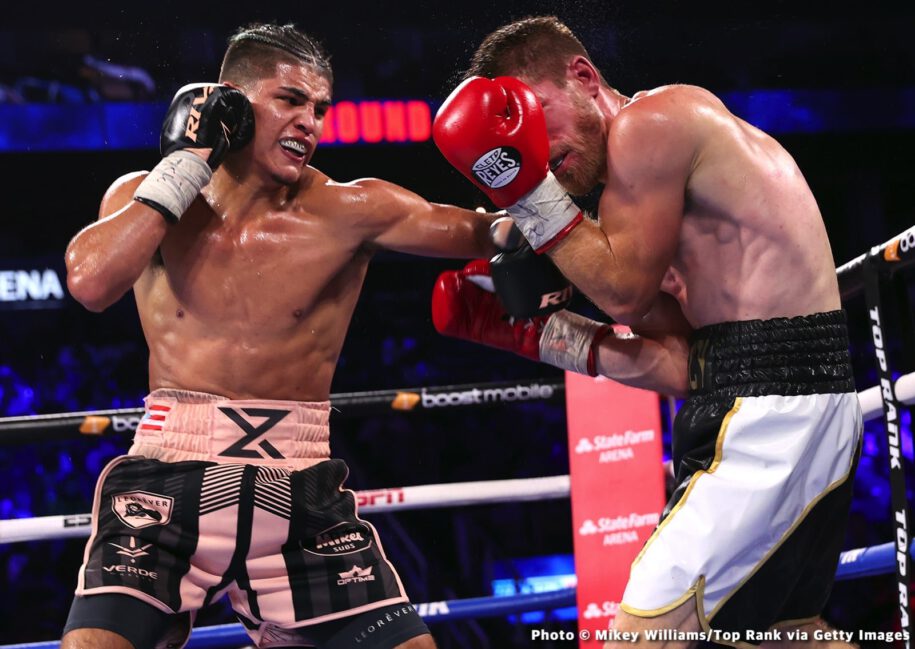 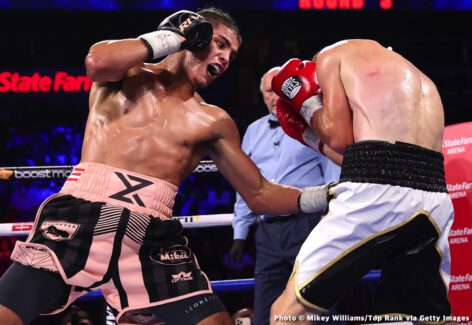 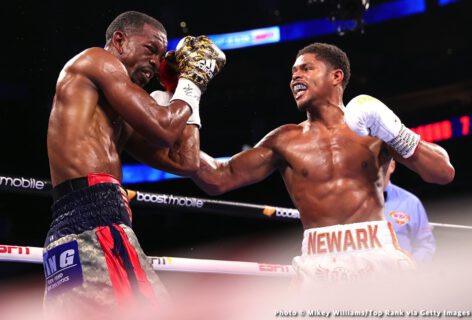 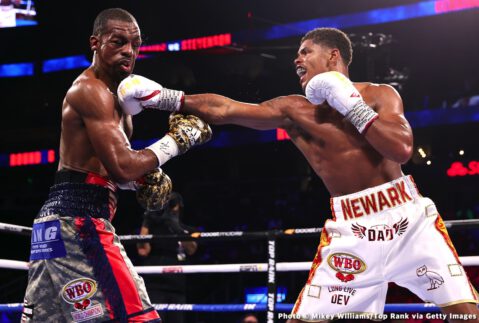 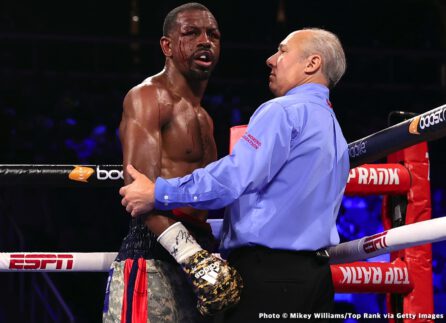 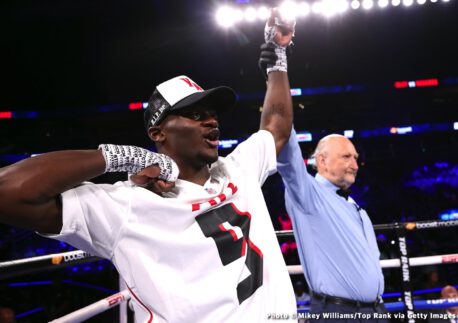 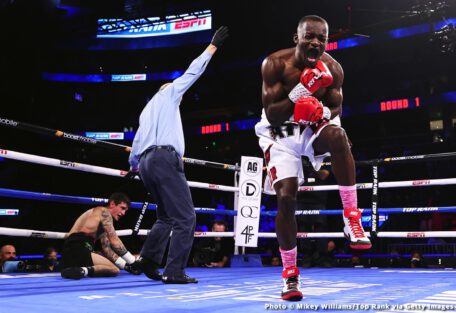 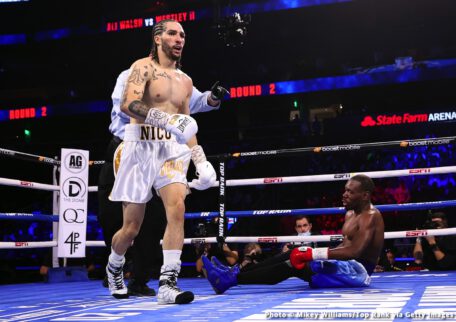 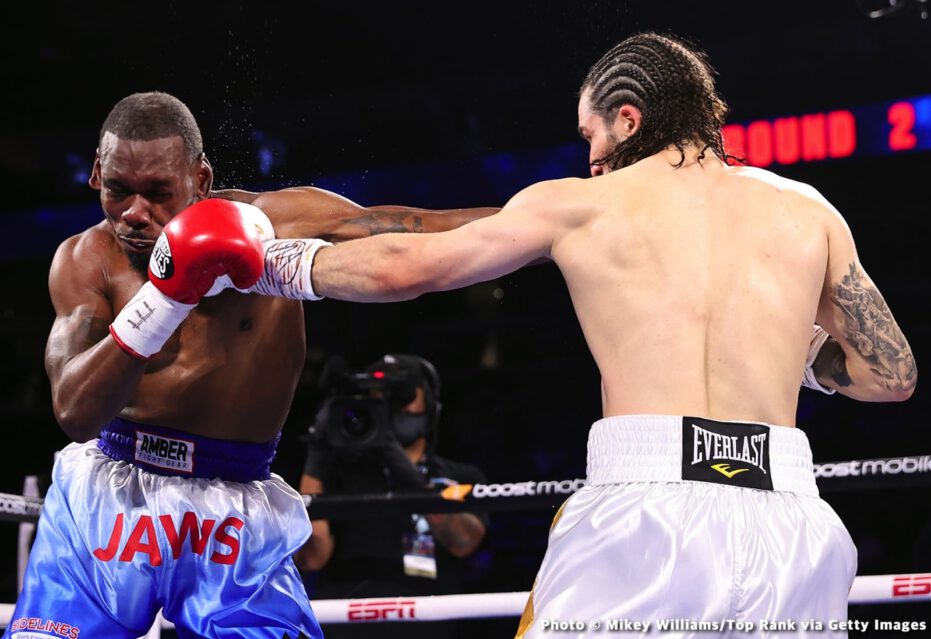 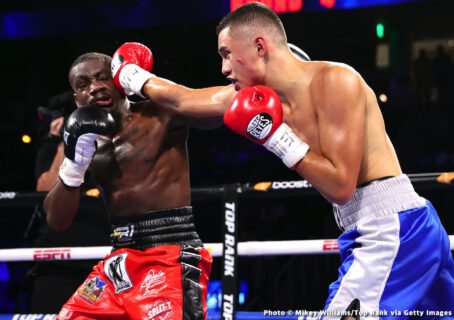 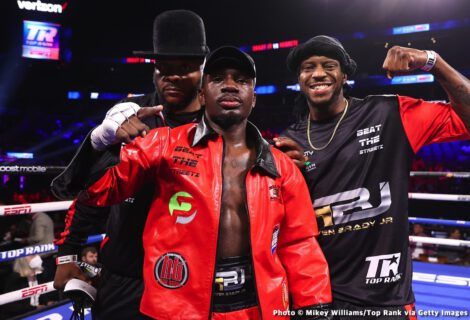 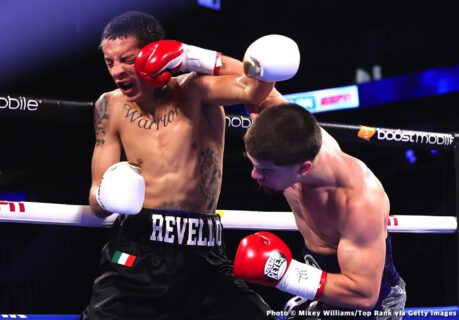 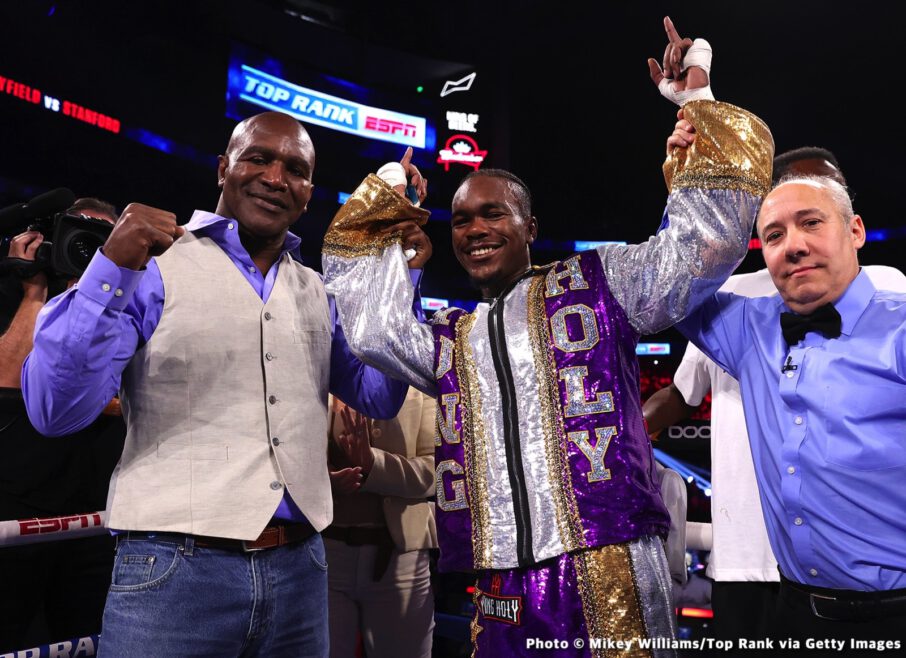 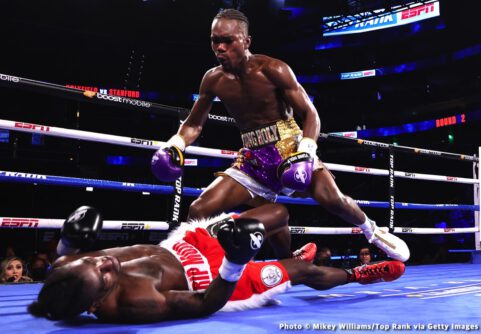 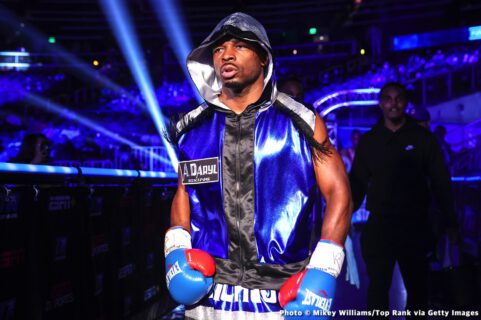 ATLANTA, GEORGIA – OCTOBER 23: Antoine Cobb walking to the ring before his fight against Jerrion Campbell at State Farm Arena on October 23, 2021 in Atlanta, Georgia.(Photo by Mikey Williams/Top Rank Inc via Getty Images) 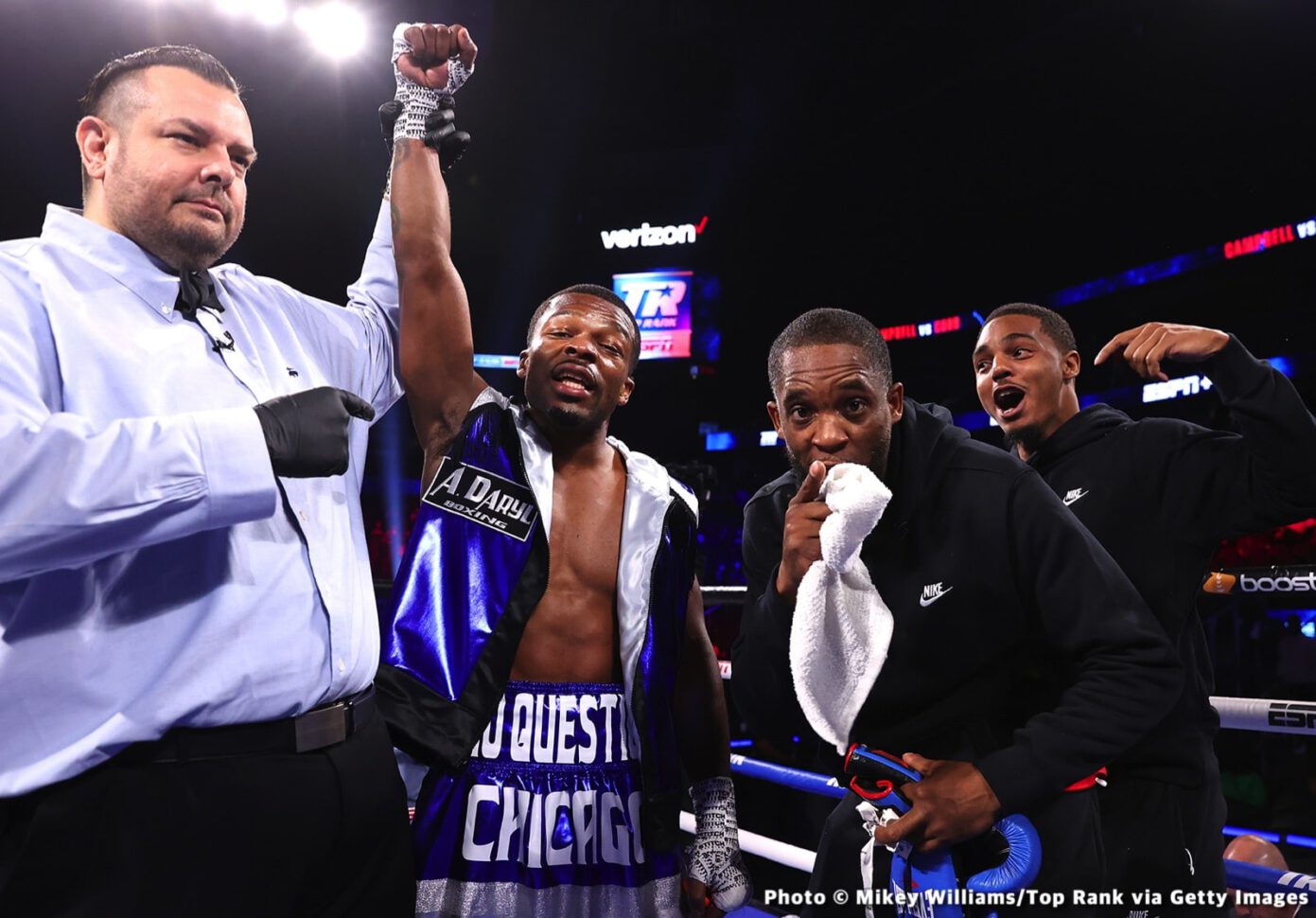