“It feels amazing, this is a dream come true,” said Figueroa. “I know everyone doubted me, but here I am with the belt. It’s all thanks to hard work and dedication.”

The fight between undefeated champions lived up to its billing with Figueroa (22-0-1, 17 KOs) implementing his smothering strategy early, forcing a firefight with Nery (31-1, 24 KOs) from the opening bell. Nery appeared to control much of the early action, owning edges in punches landed (209 to 177) and punch accuracy (34% to 27%) throughout the fight, according to CompuBox.

But it was the 24-year-old Figueroa’s persistence in coming forward that eventually began to wear on Nery. Better fourth and sixth rounds for Figueroa showed cracks in Nery’s armor and were a harbinger for what would come soon after.

“The plan was to break him,” said Figueroa. “My corner told me to pressure him and that he wouldn’t last. That’s exactly what happened. I knew he was getting tired, he was trying to box me. I saw him breathing heavy. My team just said it was time to go get him.”

In the seventh round, Figueroa appeared to hurt Nery early with a series of powerful hooks, as Nery altered his strategy and began to clinch. Continuing to press inside, Figueroa was eventually able to land the decisive punches in the form of a combination punctuated by a left hook to the body.

“You saw tonight what I can do,” said Figueroa. “I brought it to him and the hard work paid off. We did our homework. We did a great job in the gym and just took it to him.”

Nery had a delayed reaction to the powerful body shot, but once he hit the canvas, he was unable to beat referee Thomas Taylor’s count, ending the fight 2:18 into the round. Figueroa’s triumph sets him up for a unification showdown on Saturday, September 11 on SHOWTIME against WBO 122-pound champion Stephen Fulton Jr., who joined Figueroa in the ring after the fight.

“We’ve been waiting for this fight against Fulton and it’s finally going to happen,” said Figueroa. “I knew I had to get through Luis Nery first. Everything has its time. I envisioned that I was going to beat Nery and now I see myself beating Fulton. I know he’s coming with everything he’s got and that we’re going to give the fans a hell of a show.”

Naoya Inoue Is “Happy To Be A Monster”

“Great performance by Brandon tonight,” said Fulton. “That’s what I predicted would happen. This is my time now though. I’ve been waiting for this moment to finally fight Brandon. I knew that Brandon would fight how he always fights. I’m just ready for my time against him. We’re going to put on a hell of a performance. Congratulations to him tonight, but I’m coming next.”

In the co-main event, former super bantamweight unified world champion Danny Roman (29-3-1, 10 KOs) dominated the second half of the fight to win a 10-round unanimous decision over Ricardo Espinoza (25-4, 21 KOs).

“This win is a step closer to getting back on top and getting a world title once again,” said Roman. “I knew he was a tough fighter who hit hard, so I had to fight smart and make adjustments.”

After a close first half of the fight, the Los Angeles native Roman began to figure out the awkward and hard-charging attack of Mexico’s Espinoza. In round seven, Roman connected on a vicious combination of double left uppercuts, punctuated by a sweeping left hook, that bloodied the nose of Espinoza.

“I felt good overall in there,” said Espinoza. “I could have pressured him a bit more and closed his angles, but it was a good fight. Danny is a tough fighter who withstood a lot of shots to the head. He’s a quality fighter.”

Espinoza had actually out landed Roman 124 to 119 across the first six rounds of the fight before Roman’s adjustments led to a 101 to 66 edge in punches landed in his favor across the final four frames.

“I started to get my distance and started fighting my fight and controlling the ring,” said Roman. “Once I did that, everything started to fall into place. I was surprised he went the distance, but he has a lot of heart. He’s a tough fighter.”

The bloodied nose immediately became a target for Roman, as Espinoza had to be checked by the doctor before beginning the ninth round before continuing to take the brunt of the punishment in the fight. Roman’s performance in the second half of the duel was enough to give him the victory, as he prevailed on all three judges’ scorecards with tallies of 97-92 and 98-92 twice. All three judges gave Roman the final six rounds of the fight.

“I’m the mandatory so I want a title shot now,” added Roman after his victory. “I want the winner of the main event.”

“I could have boxed him more but I wanted to give the fans action,” said Martinez. “There’s nothing to complain about – I got the victory. I made it tougher on myself but I will learn from it. It’s back to the drawing board but it’s a great victory.”

“I am happy and excited to put on a good show,” said Burgos. “All in all, I am just glad that the fans enjoyed the fight.”

The veteran Burgos looked to press his opponent from the outset, but Martinez was up to the task and found spots to land counter left hooks early and often. Martinez rode his counterpunching success to a 294 to 245 advantage in power shots landed throughout a fight that was dominated by power punches.

“I wasn’t surprised he came forward,” said Martinez. “He’s a tough competitor. I thank him for taking the fight, he was tough as hell. These kind of fights are going to help me get better.”

Martinez also held the edge in accuracy, landing 37% of his punches to his opponent’s 31% connect rate. It was the body attack that kept Burgos in the fight, as his best moments came when racking up his 54 to 44 lead in body shots landed.

“He was a great opponent,” said Burgos. “I was brought in on late notice just two weeks in advance. That’s not an excuse but just the reality. Martinez fought a hell of a fight. He is definitely one of the best opponents I have ever faced.”

The two men punctuated their action fight with wild exchanges in the 10th round, as Martinez landed big shots that seemed to only make Burgos more eager to continue pushing forward. After the final bell, all three judges saw the fight in favor of Martinez, by the score of 99-91 three times. Unofficial ringside scorer Steve Farhood scored the fight 98-92.

“I was surprised by the scores,” said Burgos. “I did not think I only won one round. The public opinion and the fact that the fans were booing is what I take with me today. The fans spoke louder than the cards. I am glad to have given them an exciting fight.”

“It was a fun fight,” said Martinez. “I know the fans enjoyed the fight. I thought I could have done better, but I was landing clean, hard shots throughout. Even when he was throwing, I was slipping a lot of them and catching him. I showed I can hang in there with tough fighters.”

Saturday’s SHOWTIME CHAMPIONSHIP BOXING telecast will replay Sunday, May 16 at 9 a.m. ET/PT and Monday, May 17 at 10 p.m. ET/PT on SHOWTIME EXTREME. 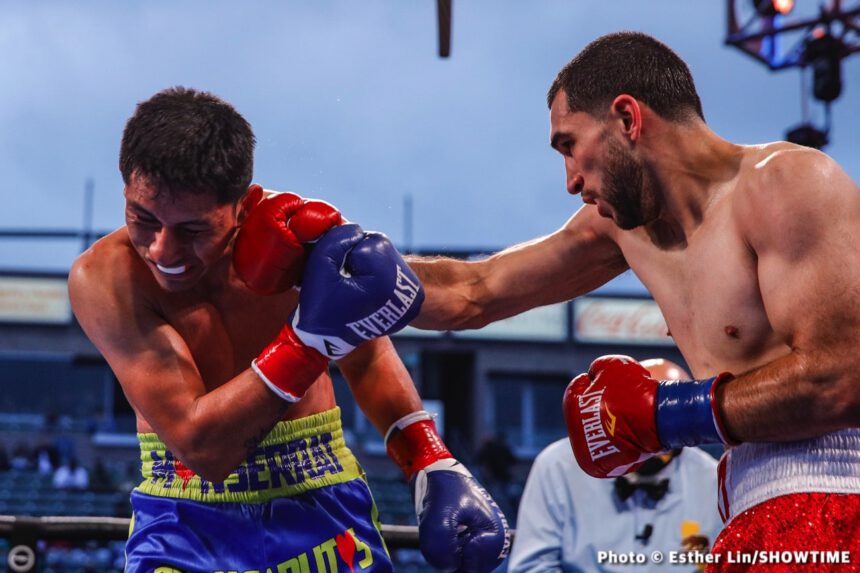 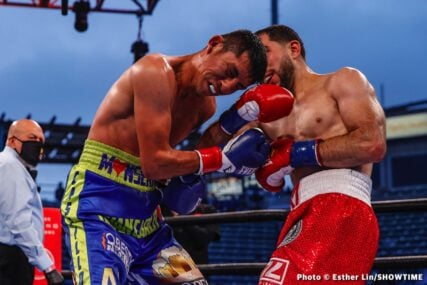 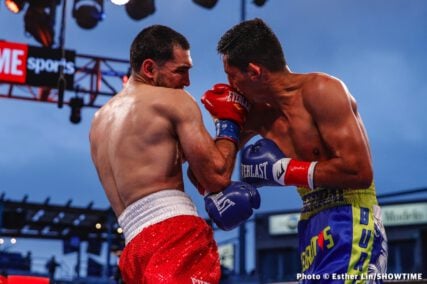 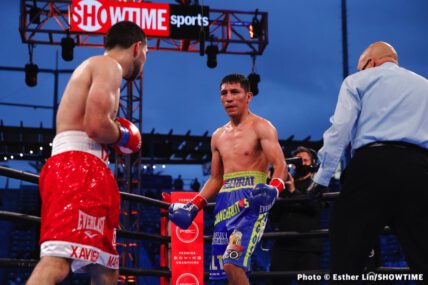 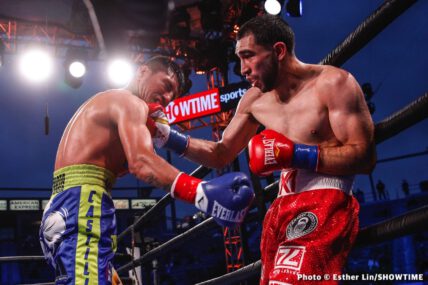 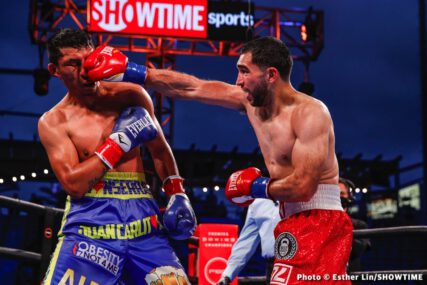 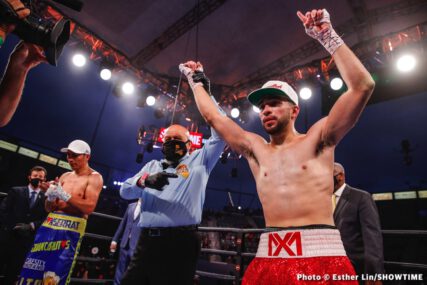 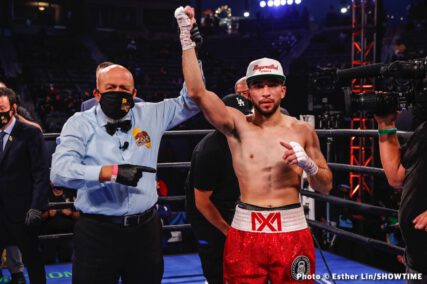 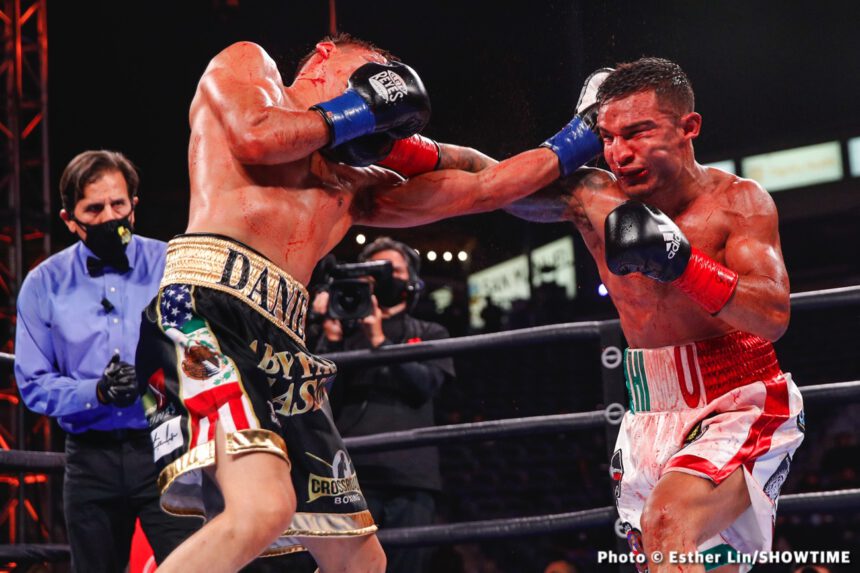 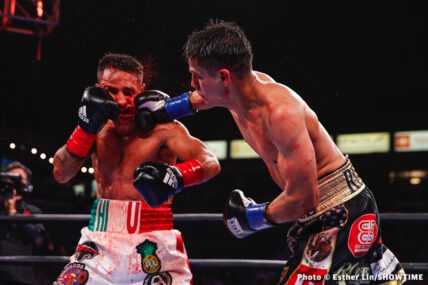 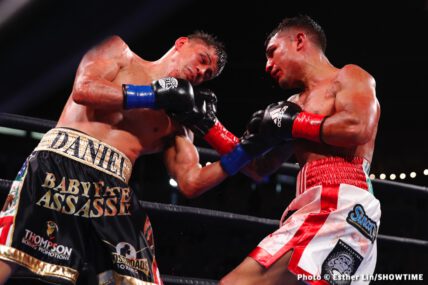 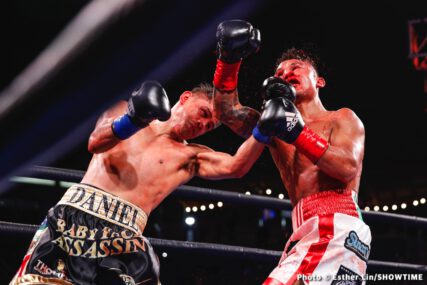 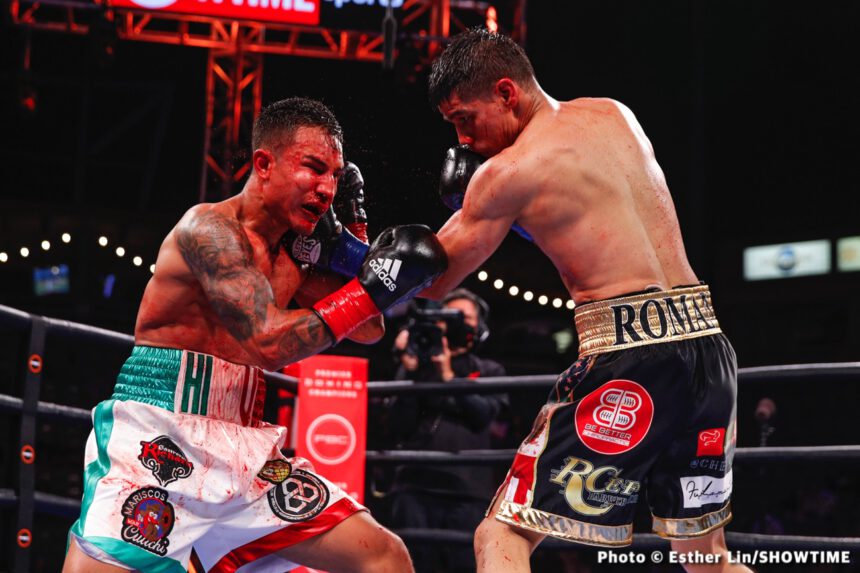 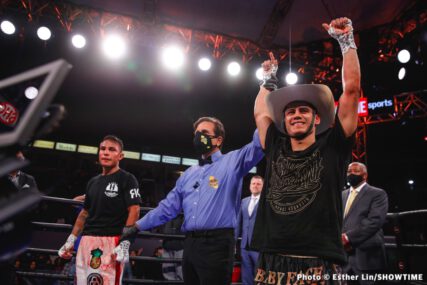 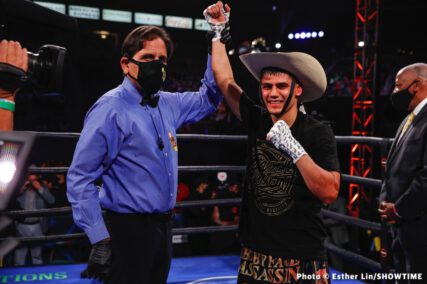 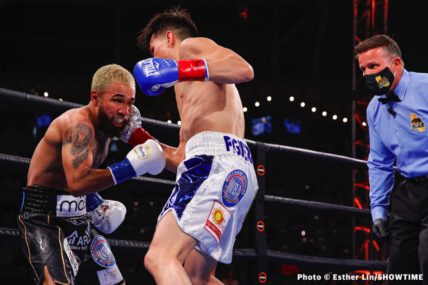 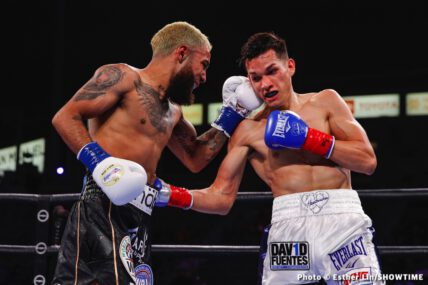 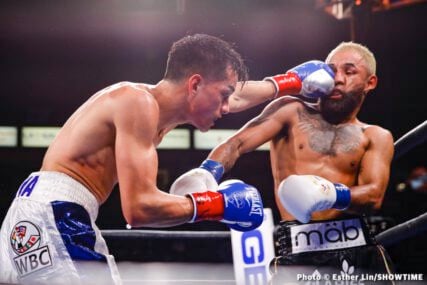 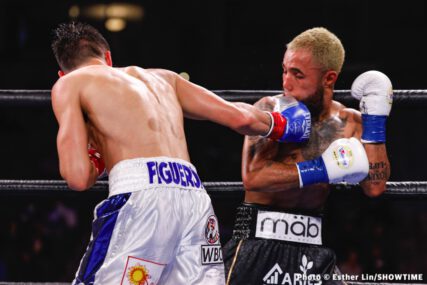 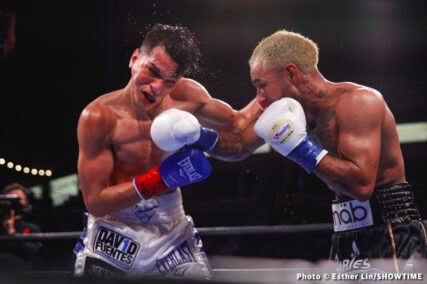 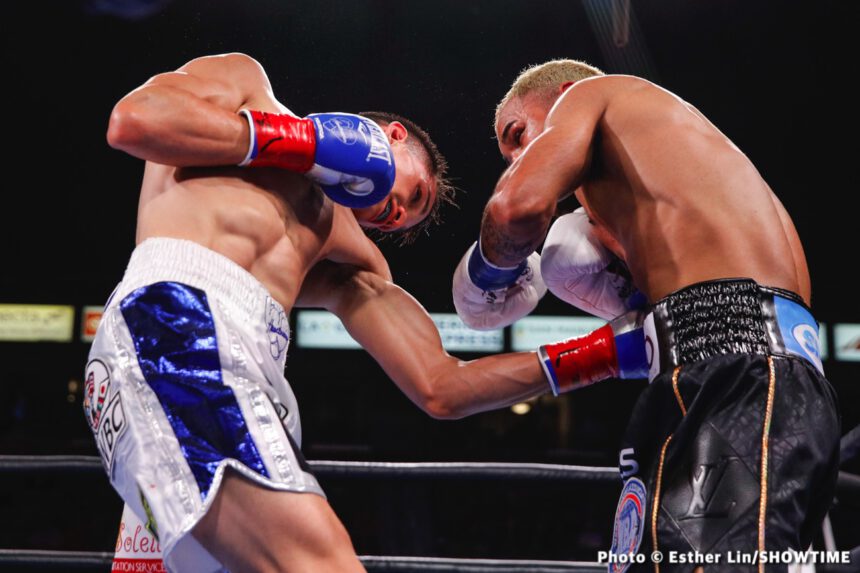 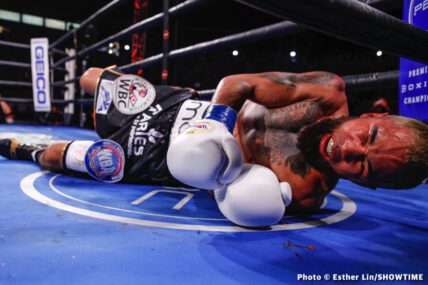 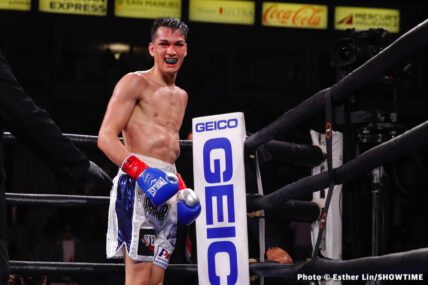 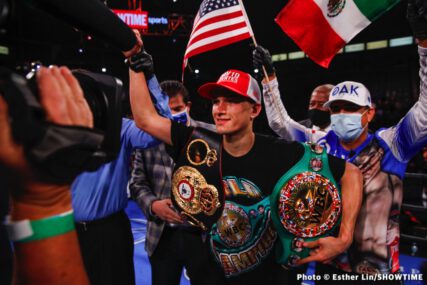