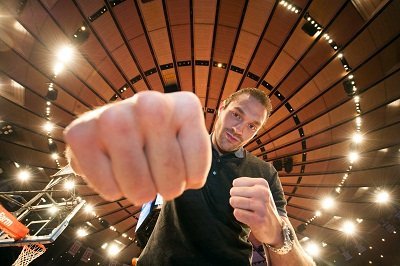 Tyson Fury could beat Dereck Chisora right now according to his trainer and uncle Peter even though the fight is still 16 weeks away.

The bitter rivals collide in the biggest domestic heavyweight rematch in recent years at the Phones 4 U Arena in Manchester on Saturday 26th July, with the winner getting a shot at WBO World Heavyweight Champion Wladimir Klitschko and the European and Vacant British titles are also on the line.

“I’m so impressed with the way Tyson is looking right now, I’ve never seen him looking so dedicated, focused and determined for a fight. He’s in unbelievable shape, his mind is razor shape and he’s ready to fight,” Said Fury.

“I’d certainly let Tyson in the ring with Chisora right now, it would be like putting a lion and a gazelle in a cage together, it would be a massacre.”

“We’re still a while off the fight and it might be a concern for some that he’s peaked too earlier, but I know Tyson and his fighting make up. He knows what’s on the line against Chisora, pride and history. His pride will never let him lose to Chisora, and he wants to make history and become the first world champion from the travelling community,”

Even though Fury won the first encounter on points in July 2011, Team Fury are not taking anything for granted and are preparing for a grade A Chisora.

He added,“Tyson’s got a totally different focus from the first fight. The first time around he was younger and inexperienced, but he still did enough to beat Chisora and made him look very ordinary,”

“That was three years ago, though, and Tyson’s improved all-round into a top heavyweight contender since then, gaining experience, maturity and physical strength,”

“Chisora’s done well and we respect his achievements and what he’s done since his loss to Tyson, we’re sure he’s going to be fit and ready, but he’ll be no match for Tyson,”

“Not only is Tyson too good for Chisora, he’s too good for any heavyweight out there. You’re looking at the new world champion.”