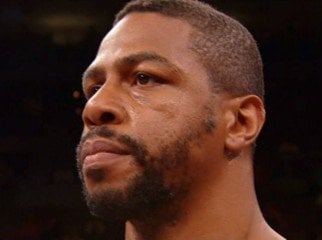 Barrett didn’t always get the win, but he sure gave his all in trying. The one time this writer was able to watch Barrett from ringside was when he gave cruiserweight champ Haye his first heavyweight test. Once again, Monte went down swinging, his big heart allowing him to force Haye to taste the canvas in the thrilling battle.

Long after that war (at least in boxing terms) Barrett rejuvenated his career with a draw with the lethal-punching David Tua. A rematch followed the draw that saw Tua hit the mat for the only time in his career, this time the Samoan lost.

Now, after losses to Shane Cameron over a year ago and to Ortiz last night, “Two Gunz” knows he has fired all his bullets.

Walking away with a deceptively average-looking record, Barrett is safe in the knowledge that he more than paid his dues in the toughest sport in the world.

East Side Boxing would like to wish Monte all the best in his hard earned retirement.