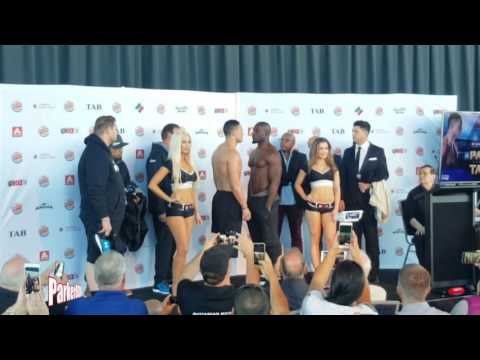 If not exactly playing the outright bad guy Carlos Takam has presented himself during his various media obligations in Auckland, as sullen, withdrawn and taciturn. Takam’s answers to even the most routine of questions posed to him could best be described as monosyllabic, although this may due to his tenuous grasp of the English language, Takam clearly preferring that any dialogue and discourse be conducted in French.

Having accepted a lucrative offer to travel to New Zealand for this IBF title eliminator, the energy around the Takam camp could well be summed up as one of mild paranoia. Offers of water, unless it is of the bottled variety, have been declined and after a member of Parker’s team was spotted passing the gym Takam was due to train at, sparring was abruptly shut down with Takam returning to the sanctuary of his hotel suite. 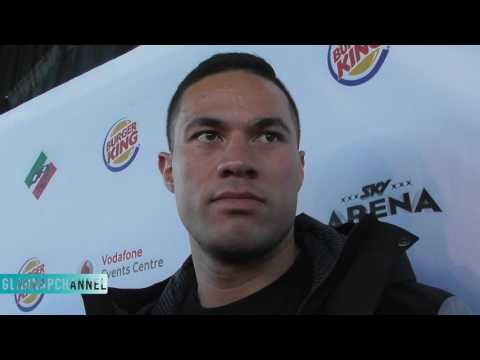 Right now Carlos Takam personifies a guy that would like to just get on with the job at hand and fight; no more talk, no more promotional duties, just a desire to lace up gloves and let his fists do the talking. Despite his less than affable manner Takam hasn’t been totally devoid of humour. When asked how to pronounce his surname by a Kiwi journalist, Takam just smiled and replied, ‘T-K-O.’ 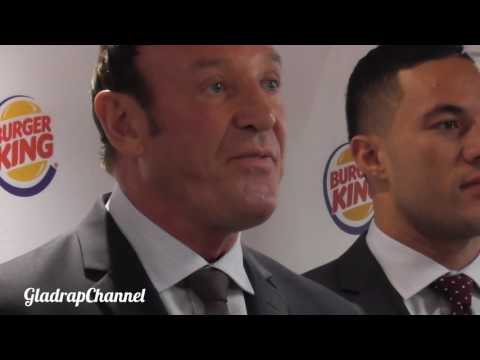 The merits of Takam’s brooding demeanour aside it only takes one look at his cuboid physique to fully appreciate just how much hard work the Cameroonian fighter has put in ahead of his bout with Parker. Takam sports the healthy and muscular sheen of a fighter whose training has been nothing short of A class. And with it the confidence of a fighter who knows he has left no stone unturned in his preparation. 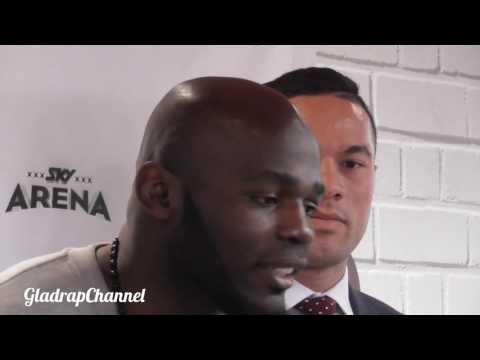 Where Takam represents a dark cloud looming so Joseph Parker has brought enjoyment and light to proceedings. Sitting in his trainer’s suite at the Pullman hotel the young Kiwi prospect hums away and jokes as he gets down to the business of signing dozens of posters and photographs, meeting his various media commitments with the enthusiasm of a fighter arriving on the big stage.

If you hadn’t seen Parker fight, nor been privy to his previous preparations you could be forgiven for thinking he is almost too relaxed, but this is the Joseph Parker way, something which has been instilled in him by his trainer Kevin Barry right from the very beginning of their partnership. Their training camps have always involved a lot of laughter and sense of fun, the idea that the journey is one to be enjoyed rather than endured.
I ask Kevin Barry how camp has gone and what he sees as the keys to victory. 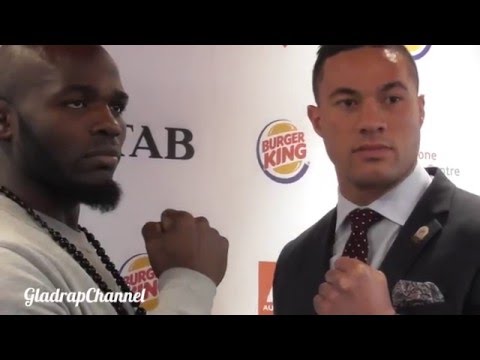 ‘Focus and intensity has been very important for us this camp. This is a fight where Joseph is going to have to concentrate for every minute of every round.’

I ask how you train for intensity and focus. 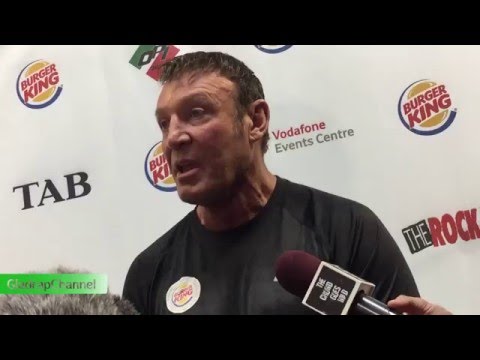 ‘It comes down to teaching Joseph to focus and watch every component of a fighter’s physiology. His chest, his feet, his hands. There have been times in this camp where a gun could have gone off and he wouldn’t have noticed he’s been so tuned in. I know some trainer’s prefer their fighter’s to concentrate on the opponent’s chest and shoulders but I like Joseph to be aware of everything.’

And with Parker’s improved intensity, how has that manifested itself?

‘I think it’s been a combination of Joseph doing everything well and being that extra bit more disciplined. Going to bed that little bit earlier, being very strict with his diet, maybe not spending quite as much time calling home. Just staying very dialled in to what we are doing every day in camp.’

Watching Parker hit the pads and move through his drills it certainly looks like the most prime version of Joseph Parker to date. It’s something that Barry readily agrees with. 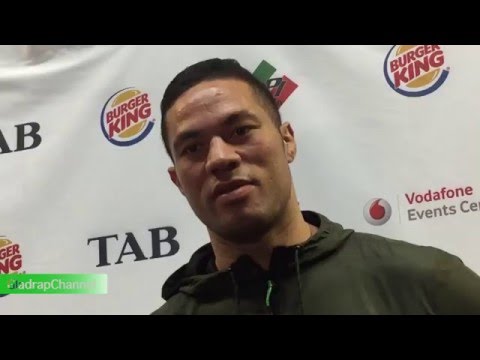 Far from being nervous though, Barry exudes an excitement that comes from the belief that this is the type of fight in which Parker can deliver a signature statement to the rest of the division.

‘As I said several times before, Joseph Parker has been fighting well within himself and I believe that Carlos Takam is exactly the type of opponent that will bring the best out of Joseph. He may have watched a lot of tape on Joseph but let’s see how well he copes with the speed when he’s actually in the ring and gets punched in the face. Even under pressure we have to fight at our pace, not Takam’s.’ 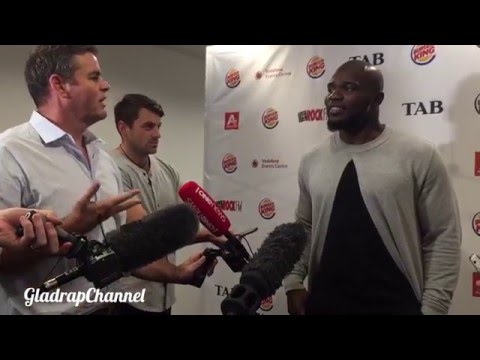 Looking at Barry put Parker through his paces over a couple of days in the gym it’s clear to see why he feels so bullish and optimistic heading into the fight. Still growing into his heavyweight body Parker has clearly added muscle, but unlike potential future rival Anthony Joshua the muscle still looks lean and fast twitch. But more than that the focus that Barry alludes to is clearly there as Parker hits the mitts with a speed and accuracy that hasn’t been seen before.

Sitting down with Parker I ask him what he makes of Takam now he has had the opportunity to size his opponent up in the flesh.

‘He looks in great shape; he’s done the hard work like we’ve done. He’s got good size, but size doesn’t really matter,’ (Laughs) ‘well actually it does matter, but we know how to combat that.’

Although fond of his right hand I suggest to Joseph that this is a fight where he’ll have to utilize both hands to keep a hard charging fighter like Takam at bay.

‘Yeah for sure. I’ve picked up a lot with every camp. It’s not like I’ve picked up everything in one camp, there has been a steady and gradual improvement, which is why we feel we’re ready for Takam now. It’s a fight where we’re going to have to utilize every weapon in our arsenal.’

And without giving too much of the game plan away I wonder what the key takeaway from this camp has been?

‘Controlling and focussing on distance. Keep good lateral movement, move from side to side, keep turning the opponent. It’s all just part of trying to fight cleverly and show our ring IQ. We have to fight this guy in a very very smart fashion. We have the physical advantages, now it’s about using those advantages.’

Being that it is a title eliminator with the winner getting a guaranteed shot at the IBF heavyweight title I put it to Parker that it must be challenging at times to not look too far ahead, being that everyone in boxing sees a showdown with he and Joshua as an inevitable super fight.

‘Of course it’s there and its unavoidable but the other reality is until we beat Takam all that talk means nothing. It’s the fight you look past that is the one that gets you. But hey, after the Takam fight, if we’re victorious let’s discuss it again!’

The reality is interest in Parker and Joshua is beginning to grow to the extent that his fight with Takam is being broadcast on Sky TV in England. I wonder if Joseph receives much feedback from fans in the UK?

‘Actually we do, we get a lot of people from Great Britain messaging us as to when we are coming over to fight. We hope it will be soon.’

Of course any such future plans are predicated on Parker winning his very next fight, no easy task when that fighter is Carlos Takam. Its been an interesting study in contrasts, observing the moods of the two camps, firstly Takam withdrawn and introspective. Perhaps that comes with years on the job, with miles on the clock and often being cast as the unfancied fighter. Perhaps it is the realisation that this really is it, that lose this fight there probably is no more tomorrows. Parker on the other hand is approaching the challenge with the relish of youth, full of excited energy and anticipation. 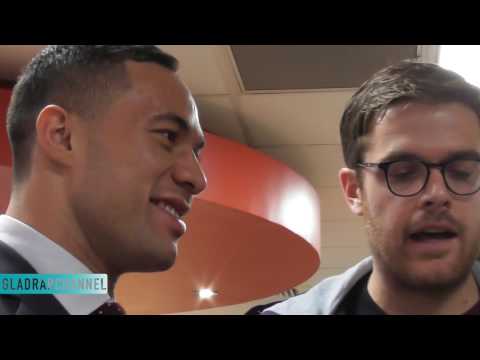 And as much as their preparations have differed then so do their styles. For Takam, the shorter man with the lesser reach, the key to the fight lies on the inside. Victory rests on his ability to neutralize Parker’s jab and make this a fight fought in the trenches, to take the younger less experienced man into deep waters and drown him with relentless pressure.

Experience aside all the measurements lie in Parker’s favour. He is the taller, quicker man, a fighter who possesses the kind of jab that could make this a very long night for Carlos Takam. One suspects that this fight is going to come down to Parker. If he is good enough to implement what will no doubt be a sound strategy, then it could well be the dominant breakout type of performance that will herald him as the real deal. However, should he lose the intensity and focus that Barry has spoken about then one knows that an experienced fighter with the type of pedigree that Takam possesses will take every opening presented to him. If the fight breaks down into a war of attrition it could well favour the highly rated veteran. 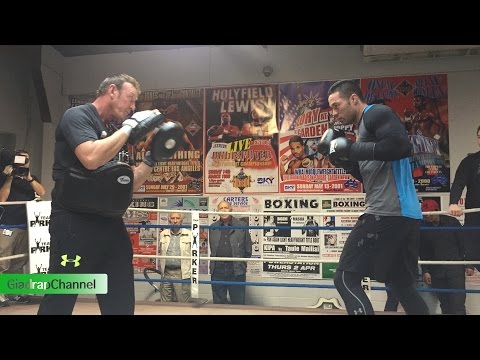 Weighing up the abilities of both fighters the eyeball test says Parker should be good enough to pass what looks set to be the sternest of examinations that a young fighter can be set. Expect Parker to set a fast pace and deliver a highly technical and methodical performance built upon a lightening jab and thundering body shots. If Parker can execute his game plan he could well stop Takam late to deliver a commanding victory that puts the rest of the division on notice. If Parker deviates from the plan in any way it could turn into a long night for the Kiwi heavyweight; a brawling mauling type fight would suit Takam down to a tee and push the odds in his favor.

Either way a memorable night at the Vodafone Events Centre lies ahead, with the victor guaranteed a truly meaningful fight in the future with the loser being consigned back to the drawing board and back to the pack in a fast heating division.