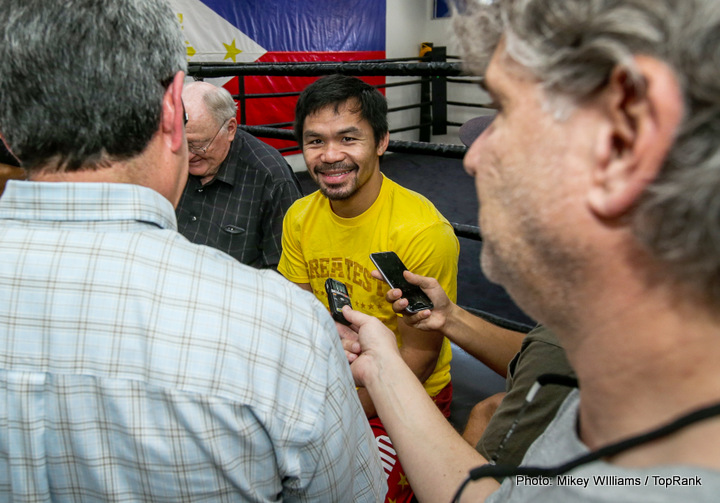 Though recently crowned WBO welterweight champ Jeff Horn recently told The Sydney Telegraph that his in-the-works rematch with Manny Pacquiao will very likely take place in Australia, the superstar former champ says he very much wants the return bout to take place in his homeland of the Philippines, or failing that in Dubai or in the US.

Speaking with The Manila Times yesterday, Pac Man said that so far he has not formally talked with Horn or his team. The 38 year old all-time great also said that whether the Horn rematch is his final fight or not, his career finale will take place in the Philippines.

“I really want to have a rematch against Horn. Although I haven’t formally talked with them yet, there is a rematch clause in our contract and there is a possibility I am going to exercise that,” Manny said. “We will do our best to bring the fight here in the Philippines as we look also for sponsors. If not here, we are considering to bring the fight to Dubai or possibly in the United States. I want my last fight to be held here in the Philippines and that fight will be under the MP Promotion.”

Again, Pacquiao has not yet decided if the Horn return will be his final fight, but according to The Manila Times piece, Pac Man has said he wants to have a say in who the scoring judges will be in a return bout with Horn; the man who shockingly and controversially out-pointed him back on July 2.

But will Horn want to travel to either Dubai, the Philippines or to America? Will the unbeaten champ have any choice? It would be fair enough if the return fight took place somewhere other than Australia, the scene of the first fight. After all, Horn has enjoyed home advantage once, now it’s Pacquiao’s turn.

Wherever this rematch takes place though, fight fans the world over want to see to see it. Is Pac Man finished, or can he avenge the seventh loss of his great career? If he does manage to do so, a redeeming win over Horn would surely be the ideal farewell fight for Manny.