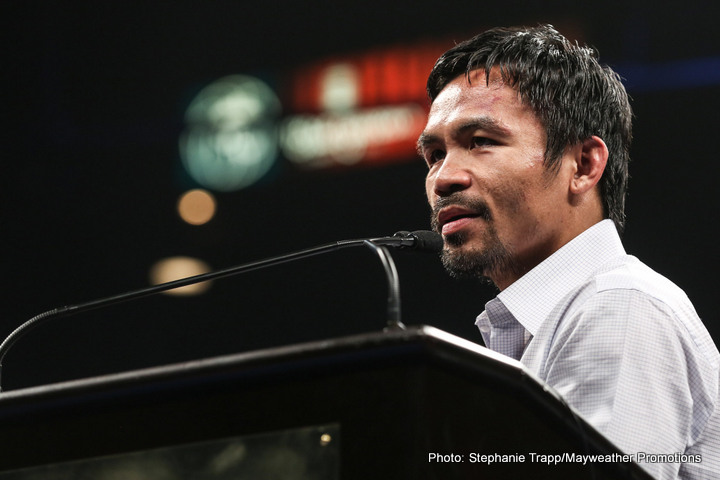 Why Timothy Bradley and not Terence Crawford or Amir Khan like boxing fans were asking? Why do you think you need a third fight with Bradley when you (and the boxing world) believe you won the first two matchups?

“This is not the same Tim Bradley I fought before. His new trainer has transformed him into a powerful and entertaining fighter. He knocked out Brandon Rios in his last fight. Rios had never been stopped before that fight. I think we will give the fans an exciting fight. I am really looking forward to it.”

“The time feels right for winding down my boxing career. We will see. I am training like it is my last fight. I want to give everyone a memorable fight. I am all about the here and now…the present. I am sure some day I will look back at my career but right now I am only focused on my fight against Tim Bradley.”

What are your five favorite fights of your career? Why? Can you explain how you felt before or after each one?

“Oscar De La Hoya was the fight that changed my life and elevated my career to a new level I never dreamed possible. I think because I jumped up two weight divisions, no one gave me a chance and Oscar was the most popular fighter of our era, my victory was also considered the upset of the year.

“My first fight against Marco Antonio Barerra was my breakthrough fight in the U.S. Marco was considered the best pound for pound fighter in boxing. He had victories over Naseem Hamed, Erik Morales and Johnny Tapia as well as most of the featherweight belts. It was my best fight. I had never been in better shape and I was in total control.

“Miguel Cotto was the ultimate test for me. Like Barrera, he was considered a top pound for pound fighter. It was such a physical battle. He’s a fierce competitor. I became the first fighter to win world titles in seven divisions. It was such an accomplishment for me and for the Philippines.

“My second fight with Erik Morales not only avenged the previous loss it was also the beginning of a rebuilding program with Freddie Roach, where I began my transformation from only using my left to becoming a more complete fighter and having the confidence to use my right effectively.

“Lehlo Ledwaba was special because it was my first fight in the U.S. and my first fight with Freddie. No one even knew how to pronounce my name. We surprised everyone with that victory.”

In what ways do you expect Bradley’s style will be different under the tutelage of Teddy Atlas?

“After seeing Tim knock out Brandon Rios I expect Bradley to engage more instead of running like he did before when we fought. He has improved a lot and has become a very powerful puncher. It’s going to be a great fight.”

Pacquiao vs. Bradley takes place Saturday, April 9 at the MGM Grand Garden Arena in Las Vegas and will be produced and distributed live by HBO Pay-Per-View beginning at 9:00 p.m. ET/ 6:00 p.m. PT.