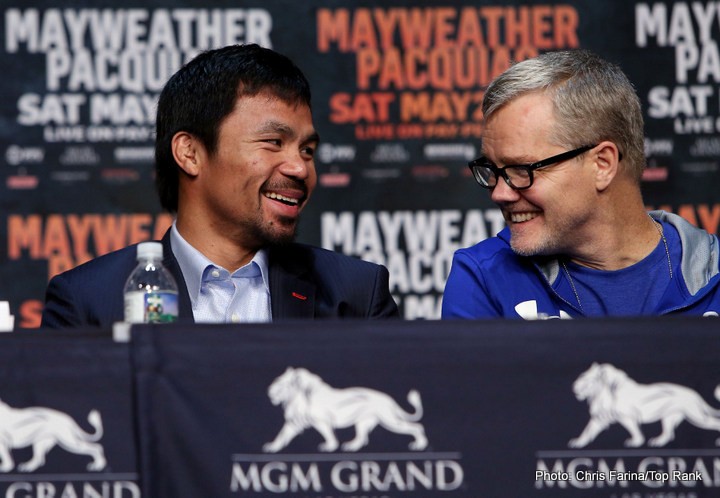 Does Manny Pacquiao want a knockout victory on July 2 when he will defend his WBO welterweight title against Australia’s Jeff Horn? Freddie Roach sure does. As fight fans know, Pac-Man has not registered a KO or stoppage over a foe since way, way back in November of 2009, when he halted an immeasurably brave and determined Miguel Cotto in the 12th and final round of their welterweight showdown in Las Vegas.

Since then, Pacquiao, 59-6-2(38) has seen just one of his fights end inside the distance: the fight he lost by sensational KO at the hands of Juan Manuel Marquez in their fourth (and seemingly final) meeting in December of 2012. Roach wants to see an end to the KO drought, and he has told The Courier Mail that the plan is for it to be ended at the expense of the unbeaten Horn in Brisbane.

“Manny hasn’t scored a knockout in a long time, and it’s time that changed,” Roach told Grantlee Kieza. “He is working his ass off for this fight and we will be keeping the world title. Manny doesn’t underestimate anyone. He knows upsets can happen in boxing and that Horn is a good puncher but we are prepared for anything. No fighter in the world has Manny’s work ethic. He runs for an hour in the morning and does 65 rounds of training in the gym every day. And he loves nothing more than entertaining big crowds.”

Roach added how there are “some big fights coming up for Manny in the near future,” and that Horn is “just the kind of opponent Manny needs to prepare for those.” Roach repeated, “we’re going for the knockout.”

Horn, 16-0-1(11) can punch himself some as Roach said, but the Australian warrior has been put on the canvas a couple of times himself – can Pac-Man put him down and keep him there? It really would be great to see Pacquiao return once more as the southpaw dynamo he once was, the unstoppable monster puncher who went through everything in his path.

The Australian fans won’t be thrilled by it, but for one night at least, Pacquiao the KO machine will indeed reappear on July 2.

Read: Lomachenko’s Pound for Pound Path
Read: Exclusive interview with Olanrewaju Durodola: “The Kudryashov rematch is a must-win fight for both of us”
Follow @boxingnews24