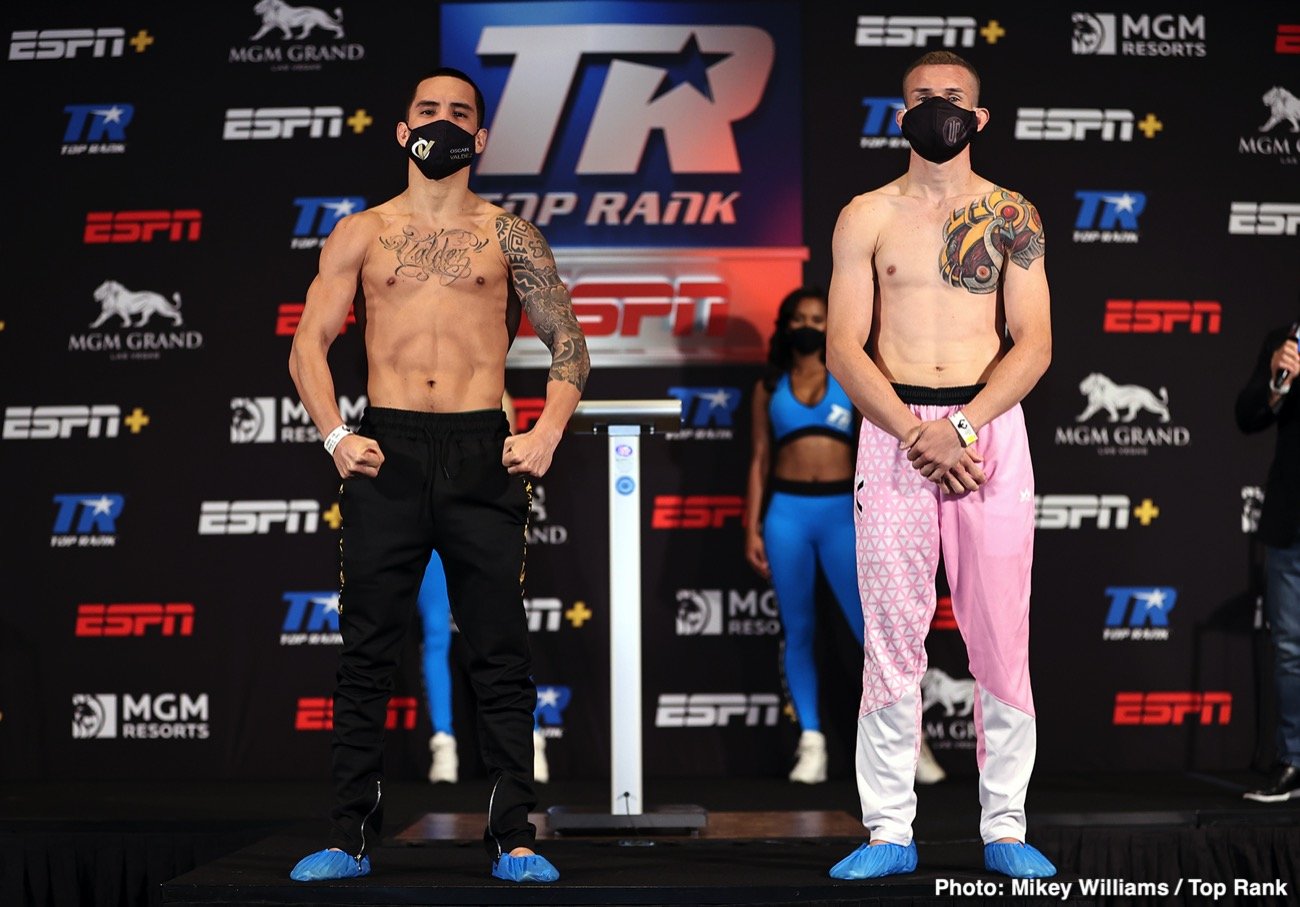 The first run of Top Rank on ESPN shows inside the MGM Grand “Bubble” will conclude with a certified boxing action hero ready for another toe-to-toe tussle.

In the eight-round co-feature, super middleweight knockout sensation Edgar Berlanga (13-0, 13 KOs), who has knocked out 13 consecutive foes in the first round to begin his pro career, will look to extend the streak against Eric Moon (11-2, 6 KOs).

The card also will highlight the long-awaited return of Kim Clavel, the undefeated light flyweight who won the 2020 Pat Tillman Award for Service at the ESPYs for her work as an elder care nurse in Montreal during the COVID-19 pandemic. Clavel, who is promoted by Groupe Yvon Michel (GYM), will fight fellow unbeaten Natalie Gonzalez in an eight-rounder.

“Oscar Valdez wants to fight WBC world champion Miguel Berchelt, and I know Miguel wants nothing more than to fight Oscar,” said Top Rank chairman Bob Arum. “Oscar knows Jayson Velez is a serious challenge that he cannot overlook. This is a great main event, and an incredible deep card, to close out our first round of shows inside the ‘Bubble.’”

Valdez (27-0, 21 KOs) has won three fights since his March 2018 war of attrition against Scott Quigg, when his jaw was shattered in the fifth round of a 12-round championship bout. He took nearly one year off following the Quigg fight and moved up to the junior lightweight ranks last year. In his last outing, November 30 in Las Vegas, he survived a second-round knockdown to knock out Adam Lopez in the seventh.

Velez (29-6-1, 21 KOs), from Juncos, Puerto Rico, nearly won the IBF featherweight world title from Evgeny Gradovich in November 2014, but he was held to a controversial draw. He has fought from featherweight to lightweight in recent years and March 2018 knockout victory over former world champion Juan Manuel Lopez. Velez was one half of a Fight of the Year Contender in February, as he knocked down Jaime Arboleda in the 12th round, only to lose a split decision verdict by a single point on two of the judges’ scorecards. He has never been knocked out in a career that’s spanned nearly 13 years.

Valdez said, “I’m ready for the best of the division. I want to be a two-division world champion, and the only way to do that is to beat tough fighters like Jayson Velez, who has challenged for a world title and possesses a lot of experience. Also, I’m very thankful to be fighting during this critical time where the sport of boxing is getting attention again.”

“We know there have been discussions about me challenging Miguel Berchelt for his WBC super featherweight world title, but Velez is first. I need to beat Velez first if I want to fight Berchelt, and I’m expecting a very tough fight. I want to dedicate this fight to all of the nurses and doctors who are working hard on this pandemic and to my father, Top Rank, and my manager, Frank Espinoza. I can’t wait to return to the ring.”

Said Velez, “Oscar Valdez is the greatest name I have ever had the opportunity to face. He is a young, undefeated fighter who was already a world champion and is hungry for another world title. At this stage of my career, I see each fight as if it were the last chance to achieve my dream. It’s now or never. We are going to make that dream come true.”

Berlanga, the brash Brooklynite nicknamed “The Chosen One,” took care of Cesar Nunez in 2:45 last December on the Terence Crawford-Egidijus Kavaliauskas undercard at Madison Square Garden. Moon has won four of his last five and has been knocked out only once since turning pro in July 2016. He has fought eight or more rounds five times.

Said Berlanga, “I’ve not really changed much about training because of the knockout streak. Training is all about improving as a boxer. I had a good amateur career, and that comes from being a good technical boxer. My focus in training has been to continue to improve my skills under my trainer, Andre Rozier, and Team Havoc.”

Clavel (11-0, 2 KOs) is coming off a career-best win last December, a decision over Esmeralda Gaona Sagahon that earned her the NABF light flyweight belt. The belt won’t be on the line against Gonzalez (6-0, 1 KO), a native of New Rochelle, New York, who was a two-time New York Golden Gloves champion as an amateur.

Elvis “The Dominican Kid” Rodriguez (7-0-1, 7 KOs), who is coming off a highlight-reel first-round KO July 2 against Danny Murray, will face Kenyan veteran Dennis Okoth (4-3-1, 2 KOs) in a six-rounder at junior welterweight.

Italian heavyweight destroyer Guido “The Gladiator” Vianello (7-0, 7 KOs) will aim to make it eight knockouts in as many fights against an opponent to be named in a six-rounder. Vianello, a 2016 Olympian, knocked out Don Haynesworth in one round June 9.