Superstar Oscar De La Hoya boxed just one time at the Staples Centre in Los Angeles. And he lost. It was in June of 2000, when “The Golden Boy” played his part in a superb fight with “Sugar” Shane Mosley.

De La Hoya dropped a close decision in the modern-day welterweight epic, he and Mosley giving their all over 12 thrilling rounds. Now, it has been confirmed that De La Hoya, aged 48, will make his ring return at Staples, on September 11, when he will face MMA great Vitor Belfort.

De La Hoya will obviously be hoping for a better result this time (although the bout, an exhibition, will not nearly have as much at stake as the world title showdown had).

Some fans are still unsure on whether the De La Hoya comeback will get off the ground, but the word from ESPN is that the date and now the venue are set. Who knows how many fans De La Hoya-Belfort will bring into the building, or how many P-P-V buys their bout will generate?

De La Hoya truly was the Box-Office king back when he was in his prime; with so many of De La Hoya’s fights being huge, can’t-miss affairs, for both hardcore and casual boxing fans alike. 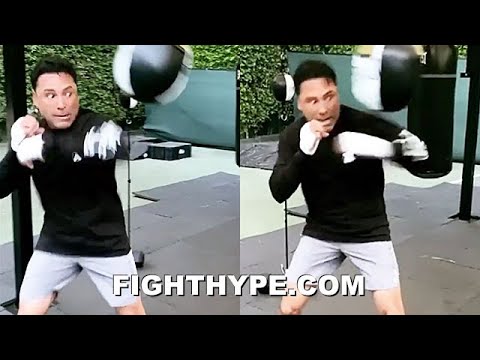 De La Hoya Vs. Belfort will go out on Triller and if the same fan nostalgia that made the Mike Tyson-Roy Jones exhibition such a smash (1.6 million P-P-V buys) is in effect, the numbers will be big.

De La Hoya said a while back how he “doesn’t know what he got himself into.”

“He’s a big guy,” De La Hoya said of 44-year-old Belfort when speaking with Fight Hype. “So we’ll see, I’ve got a good chin so I have to work the body, I have to use my speed and then be on my toes and stick the jab. I got a nice game-plan for him, so we’ll see.”

Will we see? Do YOU think this fight, this exhibition, will go ahead? Do you want it to, and will you be buying it if it does take place? Pretty much anything could happen in this one, despite Oscar’s nice game-plan.