For some, he ranks as the greatest fighter of them all. For many more, Harry Greb ranks in the Top-five, at least. It was on this day in 1926 when Greb died on an operating table, his heart – one of the most astonishing fighting hearts in boxing history – failing as the result of an attack brought on by the effects of the anesthesia. Greb, who had been blind in one eye for some time, had crashed his car, and he was being surgically repaired. The former middleweight king, who also fought heavyweights (this despite the fact that he never went much above 170 pounds), was gone at age 32.

Greb was a relentless, terrifying ring lion or tiger. Capable of throwing non-stop punches for as long as it took to get the job done, Greb was also a non-stop moving target; his speed and agility were as amazing as his stamina and punch output. Greb, too, liked to bend the rules, often slinging in low blows, headbutts, and elbows. While Greb was, like a number of prominent fighters of the time, proficient at using his thumb or thumbs to hinder a rival’s eyesight.

Records vary but including newspaper decisions, Greb had around 300 pro fights, of which he lost just 18. Greb fought at a rapid rate, with the unofficial “King of The Roaring Twenties” (in terms of boxing, above even Jack Dempsey) averaging over 20 fights a year! This is truly incredible, as well as one huge indication of just how much the sport has changed. And just look at some of the names Greb went to battle with Gene Tunney (Greb being the only man to ever defeat Tunney), Kid Norfolk, Tiger Flowers, Mickey Walker, Tommy Loughran, Gunboat Smith, Maxie Rosenbloom, and so many others.

Greb loved to fight. He also loved drinking, he loved fast cars, and sharp suits and the good-looking Greb was also a womanizer. Greb really did live fast and die young. Greb’s legend has done nothing but grows over the years, over the decades since his death. Yet some smartarses dare to frown on the legend. You know the kind of person – those who are fooled into believing fighters from today are better than the likes of Greb, this because “they benefit from better nutrition, they are so much more skilled than crude swingers like Greb, Stanley Ketchel and other old-timers, and they would have made such fighters look foolish as well as crude.”

Yet Tunney, who was a scientific fighter of the highest order, and whose skills would have seen him either dominate or at the very least live with today’s best light-heavyweights, said Greb was the fastest, greatest fighter he ever met.

“He was never in one spot for more than half a second,” Gene once said of Greb. “All my punches were aimed and timed properly, but they always wound up hitting empty air. He’d jump in and out, slamming me with a left and then whirling me around with his right or the other way around.”

Indeed. Wouldn’t it be fantastic to see today’s best at 160 or 175 in there with the absolute fighting machine that was Harry Greb? Greb, as fine a boxer as he was a puncher (Tunney said neither description ever really suited Greb), was as fast as he was lethal. He was as clever as he was savage. And to cap it all off, Greb fought – we will never know for how long – a good deal of his career whilst blind in one eye. Really, there is no modern-day fighter capable of matching Greb’s combination of skill, zest, heart, desire, and longevity despite his insane activity levels (a pro for 13 years) and sheer toughness.

Greb was stopped just twice – once in his eighth pro bout, the other time in December of 1915 when Greb completely fractured the radius of his left arm, this in his fight with Kid Graves – and he certainly deserved the decision in a number of fights that went against him (his final fight, with Flowers, for example).

Sadly, tragically even, no footage of Greb’s pro-fights exists. But the old-timers know. So should we. Greb might have been the greatest fighter who ever lived.

The Fearless Harry Greb: Biography of a Tragic Hero of Boxing, by Bill Paxton. 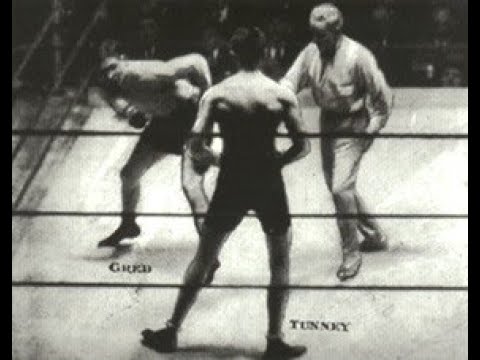