In many ways, the great Roberto Duran is the comeback king of boxing. Duran, who we know enjoyed many incarnations in the ring, had done so much by the start of the 1980s – he had been world lightweight king for years (some says THE best ever at 135), he had both electrified and frightened fans as well as opponents with his ferocious fighting style and approach, and the Panamanian legend had scored a magnificent win over new superstar Sugar Ray Leonard, this in the summer of 1980. Duran was a hugely impressive 72-1 at this time.

But then the unthinkable happened. It wasn’t that Duran lost a fight – he had been beaten by the excellent Esteban De Jesus in the first of a savagely contested trilogy – it was HOW Duran lost. It was in New Orleans November of 1980 when Duran uttered the now infamous words of “No Mas” (or did he, some say Duran never said the words that signalled his surrender, but the surrender came in any case) and then quit in the return with Sugar Ray. 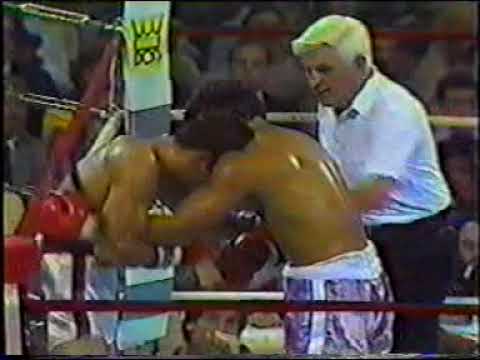 For many people, there was no way back for Duran; a hero turned villain overnight, a warrior turned coward. Duran’s millions of supporters in Panama turned on him, his home being showered with graffiti. But Duran was not done, in fact he was far from finished. It was on this day, August 9 in 1981, some nine months after the shocking loss to Leonard, when Duran returned to the ring.

Now fighting at 154 pounds and looking slower as well as heavier, Duran managed to pound out a tough ten round decision win over a game Nino Gonzalez, a once-beaten, never stopped fighter from Bayonne, New Jersey. Duran, not knowing what kind of a welcome he would receive, heard boos as well as cheers as he stepped into the ring in Cleveland, Ohio. Trained now by Panama Lewis, who would himself be described as infamous in due course, Duran was unable to put a dent in Gonzalez, even though he hit him with numerous power shots to both head and body. Gonzalez’ eyes swelled up but he didn’t go anywhere when Duran’s once devastating blows landed clean.

It would be a long road back for 30 year old Roberto, and after the fight, Gonzalez and his team insisted they had won – the scores instead going to Duran at 48-44, 48-45 and 47-43. Duran was now an amazing 73-2 and he was calling for a third fight with nemesis Leonard, who Duran said at the time, “owes me.”

Instead, Duran had another rust-removing bout – this a decision win over Luigi Minchillo – before he challenged WBC super-welterweight champ Wilfred Benitez in January of 1982. Duran lost a wide UD and once again he looked finished. Instead, Duran would have a further 42 fights! And Duran would rule the world again – first at 154 when he brutalised Davey Moore, and then at middleweight, when he stunned Iran Barkley in a classic fight.

Duran lost again after losing to Benitez, when Kirkland Laing upset him in ’82, and then Duran lost to Marvin Hagler (L15) and to Thomas Hearns (LKO2) this soon after his fine win over Moore. This time the calls for Duran’s retirement were deafening, yet on the great one marched, with “Hands of Stone” beating Barkley almost five years after Hearns had iced him.

Yes, Duran really does have to be looked at as one of the genuine comeback kings of boxing. It was only in 2001, this after a car crash forced his hand, when Duran finally retired, his final ledger an epic 103-16(70).