Forced Back Into The Ring In An Effort To Clear His Debts, The Great Joe Louis Is Badly Beaten By Ezzard Charles

Thirty years before the shell of Muhammad Ali was lured back into the ring by a combination of vanity and a need for money, the great Joe Louis was forced back into the ring due to the debts he had somehow ran up. Louis wasn’t as shot as Ali was when he was sadly and badly beaten by Larry Holmes, yet “The Brown Bomber” was nothing like the magnificent fighter he had been when he was soundly thrashed by Ezzard Charles. 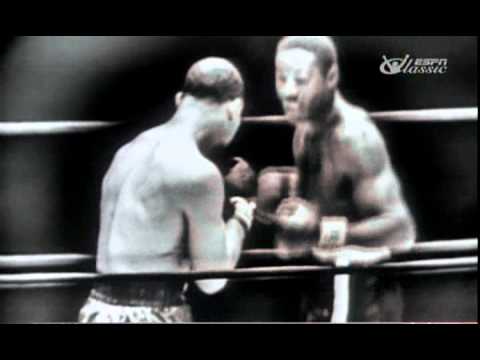 But Louis – treated unimaginably shoddily by the IRS, who plagued him for years, this to demand the back-taxes Louis had not paid on the two fights he had generously fought for free during WWII – had no choice but to fight again. It was the only way he could come close to making the kind of money the vultures hovering around him would not write off (as they so easily could have done and should have done).

Charles, a magnificent fighter himself, was to feel as badly as Holmes would feel three decades later. Like Holmes would do in fighting Ali, Ezzard was fighting his hero in Louis. But, also like Holmes, Charles had no choice – he had to beat Louis to be recognised as THE heavyweight champion. Charles had won the NBA title with a decision win over regular dance partner Jersey Joe Walcott and against Louis he was making his fourth defence. A win would see him universally recognised as heavyweight champion.

Louis had of course retired as heavyweight king in 1949, this after having made an astonishing 25 title defences. Now, a little over two years after his KO win over Walcott in his “final” fight, Joe was back, this at age 36 to Charles’ 29.

The fight, held at Yankee Stadium, saw Louis pick up a $100,00 payday, all of it handed over to the waiting IRS. Charles was paid a little over half as much as the beloved former champ. Louis was actually a slight favourite to win the fight. Instead, Charles outboxed, outmanoeuvred, out-punched and outfought Louis all night. Louis couldn’t cope with Charles’ fast feet, with the one-time untouchable champion often falling off-balance. Any big punches Joe did throw were easily slipped by the man known as “The Cincinnati Cobra.” Charles came close to closing the show by almost taking Louis out in round 14, when the ex-champ took quite a battering and was on the verge of being knocked out. Joe still had heart and courage, though, and he held on.

In the end, in doing something no man had ever done, and that’s defeat Louis via decision, Charles was rightfully awarded a wide unanimous decision victory, the scores being 10-5, 13-2 and 12-3.

Charles did not gloat about his win; he was instead saddened over having had to fight his idol. Charles would go on to make four further title retentions, before old rival Walcott sensationally knocked him out with a sweet left hook in their third battle. Louis didn’t go back into retirement after losing so clearly to Charles, he instead fought an additional nine bouts, winning eight before running into a rampaging Rocky Marciano in October of 1951.

It was a sad end to a great champion’s career. And the sadness would have been avoided were it not for the unspeakable treatment Joe was afforded by the IRS.