Has there ever been a tougher, more frighteningly durable heavyweight than Canadian legend George Chuvalo? In modern terms, it seems unlikely. Yet as fans of Chuvalo know, his toughness, his desire, and his celebrated chin (some say it’s the finest, most eternally reliable jaw in heavyweight history) were not enough to see him to the world title.

Chuvalo got two shots at the world title, and on both occasions, he went home with a 15 round decision loss. As far as the Canadian title, George won it no less than five times. In terms of big names, Chuvalo really did fight a who’s who of heavyweight stars: Muhammad Ali, Joe Frazier, George Foreman, Floyd Patterson, Ernie Terrell, Zora Folley, Doug Jones, Oscar Bonavena, Buster Mathis, Jerry Quarry, Jimmy Ellis, and Cleveland Williams. Phew.

Chuvalo went pro 65 long years ago today when he actually fought four times on the same night. Boxing in ‘The Jack Dempsey Tournament,’ in Toronto, Canada, a teenage Chuvalo KO’d all four opponents. Managed by Irv Ungerman, Chuvalo was to fight at what would today be called a breakneck pace – four more fights in 1956, six fights in 1957, five fights in 1958, and so on. But George was not always victorious. In fact, by March of 1961, he was 19-5-1. Going down on points grew to become an unfortunate habit for Chuvalo.

George sat out in 1962. Returning with vigor in March of 1963, Chuvalo reeled off five straight wins. He then boxed a draw, he then dropped a decision to Zora Folley before picking one up against Doug Jones, and then Chuvalo lost the 1965 FOTY with Floyd Patterson, also by decision. Chuvalo could fight, no doubt, but would he ever become world champion?

In November of 1965, George finally got a shot. Facing Ernie Terrell for the WBA heavyweight title that had been stripped from Muhammad Ali, Chuvalo lost another decision. Another bigger chance came in March of the following year. Ali, a permanent ban from boxing hanging over him, defended the world crown against Chuvalo at Maple Leaf Gardens in Toronto. It was Bob Arum’s first fight as a boxing promoter. 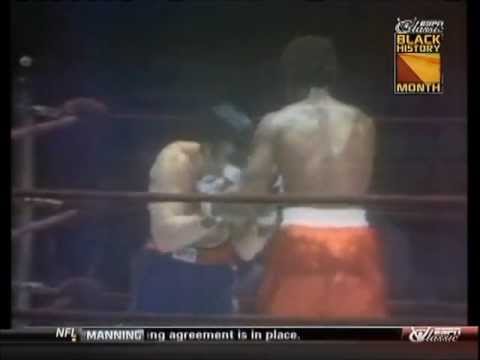 Chuvalo fought with grit and integrity, going down by, yes, another decision. All these years later, and this is the fight Chuvalo is best known for (in-the-ring fight, that is – George’s incredible inner strength, in somehow being able to cope with the unimaginably unfair and cruel hand dealt to him, with three of his sons losing their lives through drugs and guns, being his most admirable winning battle).

Chuvalo earned the champ’s respect, but he was still a contender, one who might never get another shot. As it turned out, Chuvalo never did get another world title chance, although he did battle two all-time great heavyweight champions in Joe Frazier and George Foreman. Both men stopped him, but Chuvalo never went down. In fact, in 93 pro bouts, Chuvalo was never once knocked down. “I kissed a lot of pretty girls, but I never kissed the canvas,” Chuvalo was fond of saying in retirement.

Chuvalo fought, on and off, until 1978. Finally retiring with an incredibly hard-earned 73-18-2(64) record, Chuvalo, for three decades, seemed to have escaped any real damage, this despite the often sickening amount of punishment he had taken during the course of that 22-year pro career. Chuvalo tried his hand at acting, he wrote his autobiography, and, most importantly to him, George fought a one-man war against drugs.

Sadly, in 2017, Chuvalo was diagnosed with dementia, the reports describing him as suffering from having a “significant cognitive impairment.” The tough fights, the monster shots from the likes of Foreman and Frazier, had caught up with George. Reports say Chuvalo can still enjoy the occasional day of lucidity; he is “sharp” if you catch him at the right time. But this mental battle, one 83-year-old Chuvalo cannot win, is the final cheap shot Lady Luck has slung his way.

Chuvalo is not only on many a writer’s ‘Best Chins’ list, but he is also present on many lists compiling the greatest heavyweights never to have become world champion. Chuvalo gave his all in the ring.