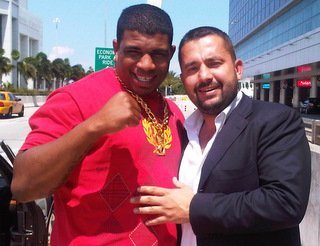 By James Slater – His promoter, Ahmet Oner insists he is the most talented heavyweight out there today, as well as being the biggest threat to the Klitschkos (Vitali especially) and a number of fans agree that an in-shape Odlanier Solis would give any fighter a hard time. The well documented problem, however, is getting Cuba’s Solis in shape!

An exceptional amateur, who won a gold medal at the 2004 Olympics, Solis has had a tough time getting below the 250-pound mark ever since his defection from his homeland. “La Sombra” did get down to 246 for his disastrous WBC title challenge of Vitali Klitschko, but a knee injury felled him in a massively disappointing 2 minutes and 59-seconds. David Haye, for one critic, put the knee injury down to the excess weight Solis’ joints had been forced to carry.

Since the humiliating loss (and the surgery and subsequent recuperation that came after), Solis has kept a low profile; leaving Oner to do the tough talking. Winning just one fight since the March 2011 loss to “Dr. Iron Fist” (a workman-like 12-round UD victory over Konstantin Airich this past May), the 32-year-old gets back in the ring in September, on the Tomasz Adamek-Travis Walker card in Newark, New Jersey.

Solis, 18-1(12) will face durable journeyman Willie Herring over a scheduled eight rounds. 33-year-old Herring, 14-11-3(5) has a poor-looking record yet he is usually durable, having been stopped just once (by Emmanuel Nwodo, on a corner retirement forced by an ankle injury, back in 2004). The problem is, Herring is really nothing but a blown up cruiserweight. The Floridian weighed-in at just 196-pounds for his first fight of this year, and he came in at 226 last time out, in July. Herring won that one, a 1st-round TKO over a 11-21-1 Joseph Rabotte, but he had lost eight of his previous ten outings. Indeed, every time he has stepped up in class – to guys like Matt Godfrey, Bermane Stiverne and Elisio Castillo – Herring has lost (he does hold a draw with Shaun George).

Herring, depending on what kind of shape he’s in on Sept. 8th, may last the distance, giving Solis an opportunity to shed more ring-rust. Solis’ physical condition will be under far greater scrutiny, though.

Look for Solis to pound out a wide decision, and then look for a bigger, more significant fight, hopefully later this year. Oner still believes in his fighter. So too do some fans.