WBC bantamweight champion Nonito Donaire says he went “completely blank” after getting tagged hard by a right hand from IBF/WBA champion Naoya ‘Monster’ Inoue (23-0, 20 KOs) in the first round of their fight last Tuesday night. The shot dropped the 39-year-old Donaire hard on the canvas.

Donaire said when he got to his feet. His corner screamed at him to put his hands up when the referee was checking him out. He was temporarily out of it still.

The former four-division world champion Donaire (42-7, 28 KOs) confesses that he never saw the right hand from Inoue that hit him because he was throwing a left hook counter. Inoue’s shot got there first and knocked him down.

Donaire never recovered from the knockdown, as he was easy prey for Inoue in the second round. The Japanese star attacked Donaire relentlessly in the second, going after him with big shots and showing no fear of what was coming back at him.

“I would probably say that was the hardest punch I’ve been hit with,” said Nonito Donaire on Twitter about being hit by Naoya Inoue in the first round that put him on the canvas.

“I came out completely blank. It was fortunate the referee stopped the fight because I would have kept going,” Donaire said about the punch from ‘Monster’ Inoue that hurt him. “The punch you don’t see is the one that really hurts,” said Donaire.

What made things worse for Donaire was his lack of hand speed for this fight. He looked considerably slower than Inoue compared to their first fight in 2019, and his physique wasn’t nearly as toned as it was back then.

The way that Donaire was wolfing down potato chips in the dressing room one after another, you have to wonder if he’d been eating junk food like that during the last three years. Potato chips aren’t something you want to be eating if you’re a professional athlete.

Donaire said afterward that he made the mistake of electing to brawl with Inoue after getting dropped in the first round. The knockdown turned on a switch in his brain, causing him to start slugging instead of fighting smart the way he needed to.

“That’s what got me. I didn’t see that punch coming at all,” said Donaire. “We came in with a good game plan, in tremendous shape. I got so caught up with wanting to brawl, and that was my biggest flaw. I love brawling,” said Donaire on where things fell apart for him.

Donaire can still accomplish big things at 118, but he needs to stay away from ‘Monster’ Inoue because he’s too fast and powerful for him.

Once Inoue vacates his bantamweight titles to move up to 122, Donaire can pick up one of the straps. In the meantime, it would be good to see Donaire lose a little weight and drop down to 115 to take on Roman ‘Chocolatito’ Gonzalez or Juan Estrada. 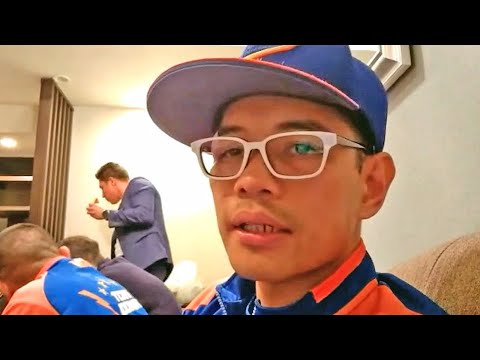