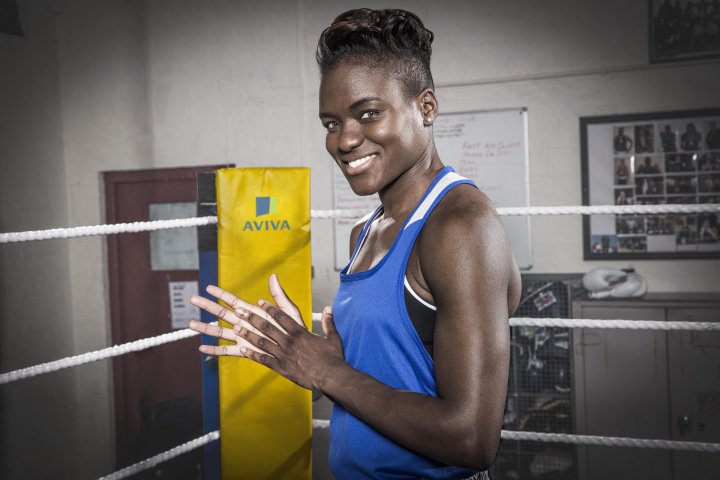 Double Olympic champion Nicola Adams is out to emulate her hero Muhammad Ali when she makes her debut this Saturday night.

The British star enters the professional ranks as part of a stacked card live on BoxNation headlined by world champion Terry Flanagan defending his lightweight world title against Petr Petrov, plus a thrilling clash between Liam Smith and the undefeated Liam Williams.

34-year-old Adams has already taken a leaf out of Ali’s book by breaking down barriers, in her case around women’s boxing, and she is keen to follow the cultural icon by going from an Olympic champion to a world champion.

“To become a world champion would mean everything to me. My hero is Muhammad Ali and he went from being an Olympic champion to a world champion as a professional and that’s exactly what I want to do as well,” said Adams.

“I’m hoping to become a world champion next year. I’m coming for every title. If I stay in the flyweight division I’ll be going for Ava Knight, she’s got all the titles at the moment, so she’s the one I’m aiming for,” she said.

Adams has always been very driven and clear in her ambitions.

As an amateur she won countless accolades and in 2012 became the first ever women’s Olympic champion when she won flyweight gold.

There were calls for her to turn professional right after London 2012 but she was determined to win even more and set new records that had never been achieved before.

“After 2012 I said I wanted to become a Commonwealth Games champion and then win a World Championship and complete the full set of titles,” Adams said.

“We’ve never had anyone do that in amateur boxing – male or female – and I wanted to be able to achieve that, as well as becoming a double Olympic champion by winning again in 2016.

“After achieving my goals in amateur boxing I want to make some new ones and become a world champion as a professional,” she said.

An impressive win this weekend against Argentina’s Virginia Noemi Carcamo will set her well on the way to attaining that goal as she looks to steal the show on a fantastic night of boxing.

BoxNation will broadcast the brilliant bill from the Manchester Arena from 5.30pm, with the full undercard action exclusively live as part of the brand new ‘Premium Pass’.

Attention will then switch to the main events at 8.30pm which will be topped by Flanagan’s defence of his WBO crown against the rugged Russian Petrov.

He hopes to look good in his outing before trying to unify the 135-pound division later this year.

The standout fight on the card, however, which is set to produce fireworks, is the impending battle between former super-welterweight world champion Smith and Welshman Williams.

The clash is for the interim WBO World super-welterweight title, with the winner eyeing the chance of world title glory.

28-year-old Smith carries the experience and has fought some leading names including Canelo Alvarez but Williams is forming a reputation as a big puncher having stopped 11 of his opponents in his 16 wins.

As the younger man at 24-years-old Williams will be looking to grab his opportunity against Smith and emerge as one of Britain’s finest talents.

Also set to feature on the card is another debutant in 19-year-old heavyweight sensation ‘Dangerous’ Daniel Dubois who will be aiming to devastate his opponent Marcus Kelly.

From Manchester, BoxNation will then move Stateside when one of the world’s elite fighters Vasyl Lomachenko defends his WBO super-featherweight world title against the tough 29-year-old Jason Sosa.

Pound-for-pound star Lomachenko knows Sosa will be looking to cause the upset and has also humbly dismissed claims made by many that he is the best fighter on the planet.

“Jason Sosa is very strong, is motivated, wants to win and he can fight all of the twelve rounds. It will be a hard fight. That I know,” said Lomachenko.

“My top three pound for pound list is; GGG, Sergey Kovalev and Terence Crawford. I don’t want to be number one until I deserve it. That means fighting and winning against two or three world champions. After that I may be number one but for sure not now,” he said.

Top unbeaten cruiserweight Oleksandr Usyk is also on the card and faces a tough test against the undefeated American Michael Hunter.

New BoxNation subscribers on the Sky platform will also be able to join the channel without a registration fee (normally £8) until Saturday midnight by entering promo code FREEBOXING.

Not only will subscribers be able to enjoy this weekend’s marathon night of live boxing but the first month will also include the scintillating showdown between Mexican rivals Canelo and Julio Cesar Chavez on May 6th from the T-Mobile Arena in Las Vegas.

Taking place at the Manchester Arena, Terry Flanagan is headlining the event when he puts his 32 fight unbeaten record on the line for his WBO World Lightweight Championship fight against the dangerous Russian Petr Petrov. A win for Flanagan, this Saturday, 8 April, in his native city could then result in a mouth-watering unification clash against WBA Lightweight Champion Jorge Linares.

The first World Championship fight of the night will see the eagerly anticipated meeting between Liverpudlian Liam Smith and Welshman and current British Champion, Liam Williams. Smith, the former WBO World Super-Welterweight Champion will be bidding to reclaim the interim version of his crown, having lost his one and only fight against the Mexican Canelo Alvarez last year.

Starting at 8:30pm on BT Sport 1 HD and BT Sport 4K UHD, the first fight night will be presented by Paul Dempsey who will be joined by former world champion, Richie Woodhall and Steve Bunce. John Rawling will be commentating alongside Richie and Ronald McIntosh will be ringside as roving reporter.

Elsewhere on the undercard, southpaw and unbeaten Lancastrian, Jack Catterall will battle it out against his fellow Englishman Martin Gethin as they enter the ring for the WBO Intercontinental Super-Lightweight Championship.

The first fight of the night will see the exciting and highly rated Daniel Dubois also make his professional debut when he takes on Marcus Kelly.

In the lead up to the fights, BT Sport will be showing a brand new preview show, No Filter Boxing, on its digital channels, giving fans a fresh and intimate insight into a boxer’s preparations for fight night. This will include Liam Smith talking fighting and football with Steven Gerrard at Liverpool’s Anfield, Nicola Adams letting the cameras into her San Francisco training camp and Terry Flanagan showing the cameras around his native Manchester.

BT Sport’s live coverage will be a world first as the sport will be shown in Ultra High Definition with Dolby Atmos. Virtual Reality highlights of the fight footage will be published near live through BT Sport’s social media.

Simon Green, head of BT Sport, said: “I am really excited that after months of build-up BT Sport is counting down the days until the first fight night to be shown on the network and online. We have some great fights on the first night, with two world title fights, Nicola Adams debut and Daniel Dubois making his professional bow.”

“We have an exciting line-up of highly experienced and respected presenters, commentators and pundits who won’t miss a punch nor pull a punch in making sure we capture all the action and the stories of each and every fight.”

“Innovation is at the forefront of everything we do at BT Sport and our new digital series ‘No filter Boxing’ will reach out and engage an entirely new boxing audience providing them with unique behind the scenes content in the build-up to all our big fights.”

You can watch Fight Night Live on Saturday 8th April at 8.30pm on BT Sport 1HD and on BT Sport 4k UHD. To watch the preview shows, No Filter Boxing, visit btsport.com.

During what can be considered one of the most successful ever amateur careers for any female or male boxer, Adams secured a clean sweep of amateur titles winning every available accolade.

After a breath-taking amateur career, the hugely popular Double Olympic Gold Medallist will now embark on the next chapter of her remarkable story under the guidance of Hall of Fame promoter Frank Warren; starting with a four round Flyweight contest against Carcamo on Saturday 8th April.

Carcamo, 32, has won four of her seven bouts, losing two and drawing one. Nicknamed ‘La Tigresa’, she has racked up 32 rounds under her belt since making her professional debut against Silvia Moreno in 2015. This will be her first time fighting outside of her homeland.

“Now that my first opponent has been announced, all I want to do is get in the ring – I’m so excited for my first fight,” said Adams. “Training with Virgil Hunter has been amazing, he’s taught me some great new things for my professional debut.

“All my focus is on Saturday 8th April and the road to becoming a World Champion. Together with Frank Warren, BT Sport and BoxNation we’re going to take women’s boxing to the next level”