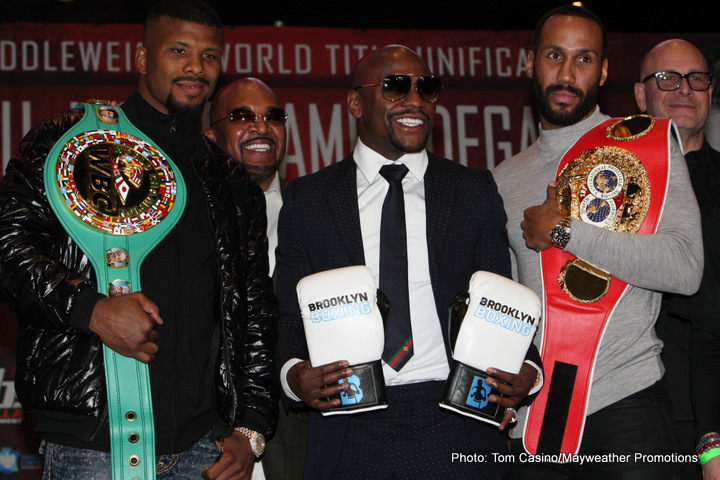 The way things stand right now, 2017 promises to be a big year for boxing; with blockbusters such as Klitschko-Joshua, Golovkin-Jacobs, Thurman-Garcia, Haye-Bellew all set and others, such as GGG-Canelo and Wilder-Joshua possibilities.

But will 2017 provide fight fans with everything they want? Here are a few things this writer wishes for over the coming 12 months:

The James DeGale-Badou Jack super-middleweight clash set for January 13 to have a clear, deserving winner – this winner to go on to try and unify all of the belts at 168.

The Carl Frampton-Leo Santa Cruz rematch, also set for January, to be as good as the first fight between these two, two of the very best featherweights on the planet.

The Haye-Bellew fight to last at least three rounds.

The Joshua-Klitschko fight to, A: go ahead as scheduled (no injury postponements) and, B: end in a KO, one way or the other.

Tyson Fury to get back in shape, mentally as well as physically, and fight again on a regular basis.

Bernard Hopkins to keep his word and stay retired.

Roy Jones Junior to retire, win or lose against Bobby Gunn in February.

The Miguel Cotto-James Kirkland fight to surprise us all and actually be a pay-per-view worthy battle.

Amir Khan and Kell Brook to FINALLY get it on.

Floyd Mayweather and Conor McGregor to NOT fight. Moreover, an end to any further talk of this bogus “super-fight.”

Hughie Fury to get his title shot.

Vasyl Lomachenko and Orlando Salido to have their rematch.

Yuriorkis Gamboa to get a big, big fight.

Manny Pacquiao to fight Adrien Broner and Terence Crawford and then call it quits on a brilliant career.

Guillermo Rigondeaux to get himself a meaningful – and wholly deserved – big fight.

Chris Eubank Junior to fight either Billy Joe Saunders in a return, GGG or anyone else more deserving than Renold Quinlan.

ITV’s return to boxing to feature far, far better value for money fights than the above bout in their pay-per-view adventure.

Artur Beterbiev to get his well deserved world title shot.

No more high-profile fighters, or any fighters come to that, testing positive for drugs/steroids.

Sky Sports commentators, or any other boxing commentators who are also guilty of this annoying act, to stop talking during the one-minute interval between rounds of a fight.

The winner of Joshua and Klitschko to next fight either Wilder or, if he’s back and fully fit again, Tyson Fury.

No more brawls at press conferences/weigh-ins.

Dillian Whyte and Dereck Chisora to fight each other again.

Errol Spence Junior to finally get his title shot.

A heavyweight “Super-Six” (no chance!)

Another “Rocky” movie (why not, the last two were great!)

Iran Barkley to be voted into The Hall of Fame.