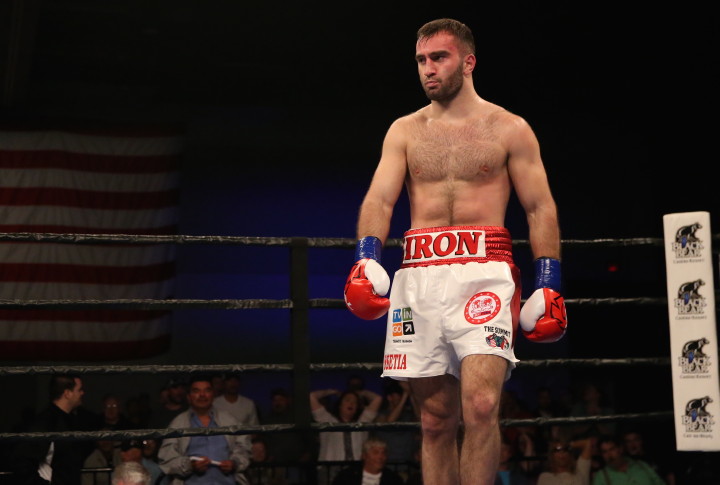 Gassiev delivered a powerful left hook that put Shimmell out on the mat and halted the cruiserweight title elimination bout immediately at 2:54 of the first round. Shimmell was able to move effectively for much of the round and had landed an early combination that got the attention of Gassiev.

The Russian fighter, who now trains in California with Abel Sanchez, was able to start working through the defense of Shimmell with his jab as the round wore on. The final blow came after Gassiev imitated a right hand and delivered the critical left hook while Shimmell was caught counter-punching.

The former title challenger bothered Nofire early and often from his southpaw stance and was successful with his left hand throughout the fight. Abell snuck in a strong right hook in round two that stunned Nofire before he delivered multiple left hooks to score the early knockdown.

Nofire tried to weather the storm but a big right hand from Abell again put Nofire down early in the third round. Nofire almost made it out of the round but Abell’s power in the left hand proved to be too much as a series of strong shots sent Nofire down for the final time before his corner stopped the fight.

Abell could hardly miss as he connected on 42 percent of his punches on his way to the stoppage at 2:12 of the third round.

Shaw controlled the action with superior boxing skills and strong combinations throughout the fight. Kelly had some success targeting the body of Shaw but was unable to maintain a consistently effective attack.

The punch stats were in line with the judges’ scores of 60-54 as Shaw out landed Kelly 95 to 56 while connecting at 34 percent mark to Kelly’s 23 percent.

“I was trying to set up the final punch. I imitated the right overhand so that I could come back with the left hook. It was a combination that we practiced.

“It wasn’t the most powerful punch but I snapped it pretty well. I was ready to keep going but that punch was enough.

“I’ve trained hard and been improving my skills. I’m going to work and get ready for my title shot.

“I am extremely happy he got up and I hope he is okay. I never want to hurt anybody; I just want to win the fight.”

“I got caught. Gassiev has power. It was a clean shot and I got hit, it is what it is.

“He’s a really good fighter with power. I’ll be back. It was a learning experience.”

“I did this for myself. I wanted so see where I was at. I’m a different fighter when I have time to train.

“I’m going to give it some time to think about the next step. Right now I want to fight for the rest of my life, but if I got beat It would be different.

“This is exactly what I planned. I thought I might get him in the first round but I took my time. My punches were sharp. There were times in the past where I felt my timing was off but I’m in great shape so I wasn’t thinking about getting tired.”

“I just didn’t get the shots I was looking for. I thought I was going to be able to back him up more with my jab. He stayed his distance and lunged in from out of range.

“One of the head butts caught me pretty good and I just couldn’t see what he was coming back with.

“The head butts were giving me problems and he followed up on me after them. He was a little stronger than I expected but I’ve been hit hard like that by other fighters.

“I’m disappointed. I trained really hard for the fight. I’ve never had a problem taking power before. It’s just one of those things that happens in everybody’s career, but I’ll be back.”

“I felt great in there. It felt good to be victorious in my first fight on PBC. I fought a guy with a lot of experience and did what I had to do.

“I’m the best kept secret in America. That’s my motto.”

“I started too late. I was working behind my jab but I didn’t do enough behind it. I gave it my all.

“He only hurt me once, with a right hand in the fourth round. I didn’t think he had speed but I should have start earlier.”

PBC on FS1 and FOX Deportes was promoted by Warriors Boxing in association with Seconds Out Fights.