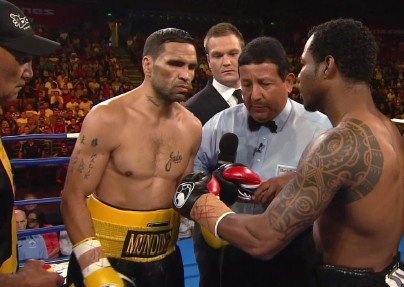 In the best exchange of the fight, Mosley stunned Mundine with a right hand through the thirty eight year old local’s high guard in round four but was then rocked himself seconds later. Mosley looked to tie up but as Mundine stepped back he fell to the ground. Caiz ruled a slip.

Anthony continued to set the tone in the fifth and sixth before Dr Lewis was called in and stopped the fight before the start of round seven.

Mosley, coming off a points win over Pablo Cesar Cano in Mexico at 147 pounds in May, looked like a 42 year old veteran well past his best but credit Mundine’s jab.

The win, which was for the WBA’s International belt will improve Mundine’s no. 10 ranking going in.

In an exciting eight round clash on the under card, Mundine gym mate Renold Quinlan (6-0, 3 KOs) gave away seven pounds scoring a clear decision over Ghan’s Joseph “Pride of Osu” Kwadjo (21-7, 16 KOs). Quinlan, ranked 11 by the ANBF at super middleweight, rocked the tough African a number of times but was also caught himself as he squared up looking to land heavily. At 24, and just three bouts back since a two and half year lay off, the 6 foot Quinlan, who has Aboriginal and Fijian heritage, looks a good prospect.