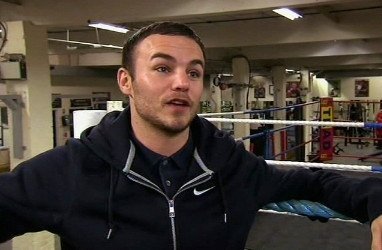 Eddie Hearn’s bumper triple world title card from the O2 finally lands this weekend – and arguably the best and most meaningful fight on the bill is Dagenham’s Kevin Mitchell (39-2, 29ko) hoping to finally get it right on the world stage, when he fights dangerous Venezuelan Jorge Linares (38-3, 25ko) who is promoted by Mexican-American legend Oscar De La Hoya – for the South American’s WBC lightweight title.

The fight may well represent something of a final chance for the affable Londoner, who on his day can mix it with the very best of them – yet on the 2 prior occasions he has stepped up to world level – Michael Katsidis (WBO interim – 2010) and Ricky Burns (WBO – 2012) he has been found wanting and ended up getting stopped both times.

Today he spoke to Sky Sports News about the fight with 3 weight world champ Linares – who has shown his own frailties in the past – as evidenced by the 3 stoppage losses of his own. 2 extremely early and one in his fight with Antonio DeMarco who busted him open and stopped him on his feet in the 11th round.

It would seem the Londoner is calm and collected ahead of Saturday and determined to break his world title hoodoo. He told Sky;

“Jorge Linares is a world champion fighter and is determined to give Kevin Mitchell a difficult time in the ring as he looks to defend his title.”

“Mitchell may well have home advantage but Linares’ speed and skill will give Mitchell a considerable challenge in the ring. Make no mistake this is a difficult fight for both fighters and one that is sure to excite.”

READ:
It Was 20 Years Ago Today – The Classic Barrera-Morales War And The Beginning Of An Epic Trilogy
Read: The IBF’s Fighter Of The Year Has Arrived – Gradovich v Selby
Read: Anthony Joshua : “I’m Happy My Hype Train Is On The Road”
Follow @boxingnews24