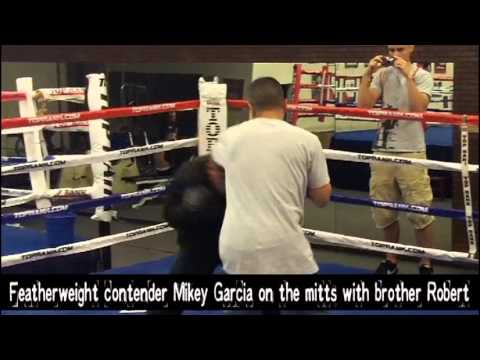 By Joseph Herron: Since turning pro at age 18, Oxnard, California based fighter Miguel “Mikey” Garcia (29-0, 25 KOs) has been cultivating his pugilistic skills for the single crowning achievement of becoming the Featherweight Champion of the World.

“My primary goal has always been to win and capture a world title in the Featherweight division,” insists Mikey Garcia. “That’s number one. That’s what I’ve been working so hard for and that’s what’s most important to me.”

“I understand why headlining on HBO or Showtime is so important to so many fighters, because that’s what makes the most sense financially. But money comes and goes. A world title is forever in the sport of boxing. When you become a world champion, no one can ever take that distinction away from you. You will forever be recognized as a world champion in one of the oldest professional sports in the world.”

“Although I feel very blessed that I’ve been featured on HBO, and I do appreciate the fact that not every fighter has received the opportunity to fight on this stage, I remain hungry to defeat a world champion and win a world title. That’s the ultimate prize.”

While the world title won’t be up for grabs when he enters the ring this Saturday night, Mikey realizes that there is no gold at the end of his pugilistic rainbow without an impressive victory on November 10th.

“Every fight is very important at this stage in my career. In this era of boxing, all of your hard work can be erased by one bad performance on the biggest stage of the sport. I’m treating this fight like there is a world title on the line because it ultimately is. There is no world title fight if I don’t defeat Barros on November 10th.”

If Garcia is indeed successful in Las Vegas this weekend, he will be in line to realize his dream of becoming a world champion when he receives the opportunity to face the current WBO Featherweight Champion, Orlando Salido, within the first quarter of 2013.

It is a challenge that the Garcia family firmly believes Mikey is finally ready to conquer.

“People can say what they want about my progression up to this point, but it takes time to cultivate the skills that are necessary to not only win, but defend a world championship. There are a lot of fighters in boxing that win a world title but obviously aren’t ready for that responsibility, and they eventually lose whenever faced with the toughest challengers in their respective division.”

“I want to be viewed as a true champion who can defend his title and reign for several years, and I feel that I’m ready right now. My family and I feel that I’m ready to be the kind of world champion who can take on the best fighters in boxing. That’s what is expected of a true champion. Not only to win the title, but to defend it against the best in boxing. I’m ready for that challenge.”

One name that is synonymous with Oxnard boxing, “Ferocious” Fernando Vargas, has perhaps indirectly played a part in the conscious effort to guide and cultivate Mikey’s promising career at a very deliberate and measured pace.

Many boxing pundits have viewed the brilliant career of the former Junior Middleweight Champion in hindsight as possibly being accelerated too quickly.

Mikey Garcia expounds on the probable impact of Fernando’s chosen path of progress. 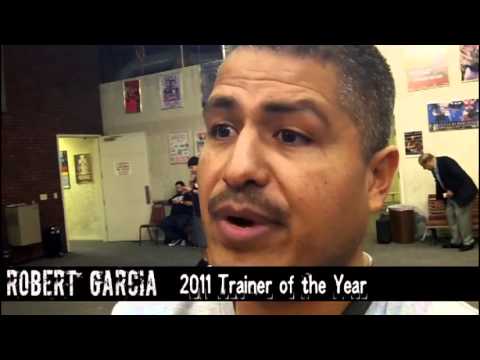 “I think Fernando had a very good career and accomplished a lot in boxing. But there are a lot of people who feel like I do that Vargas was indeed rushed into the big fights way too soon. But his circumstances were different. He had a different manager and promoter, and ultimately a different mindset.”

“I have Cameron Dunkin, Top Rank, and my family guiding my career. With many years of experience behind them, my team has specific goals and a long term vision for my career. I’m very happy with the way that they’ve navigated my career and have kept me active while I’ve been consistently learning my craft. But they feel that I’m ready now, and we’re just one step away from challenging Orlando Salido for the world title.”

The highly touted 126 pound contender discusses his challenging path towards gaining a title opportunity with the current WBO Featherweight Champion.

“It’s been difficult getting a fight with one of the current Featherweight title holders. Either because of promotional differences or the idea that I’m possibly considered to be too much risk for the reward, it hasn’t been easy trying to get one of the Featherweight Champions in the ring.”

“Fortunately for us, Salido is also promoted by Top Rank and is a true champion who doesn’t back down from any challenge. He’s continually fought the best in the Featherweight division for probably the past ten years and he has earned the right to be called the WBO Featherweight Champion.”

“That’s why many people consider him to be the best in the division at this time, and we feel very fortunate that he accepted our challenge. Yes, he had a little accident that delayed our title fight, but it’s going to happen. We’re so excited and thankful to get this opportunity, and we really look forward to putting on a great action fight for the fans.”

“But like I said before, there is no title opportunity with Salido unless I defeat Barros on November 10th. That’s who is going to be in the ring with me, and that’s who I’m 100% focused on at this time.”